United States Officially Withdraws From The WHO

Home /NEWS/United States Officially Withdraws From The WHO

United States Officially Withdraws From The WHO 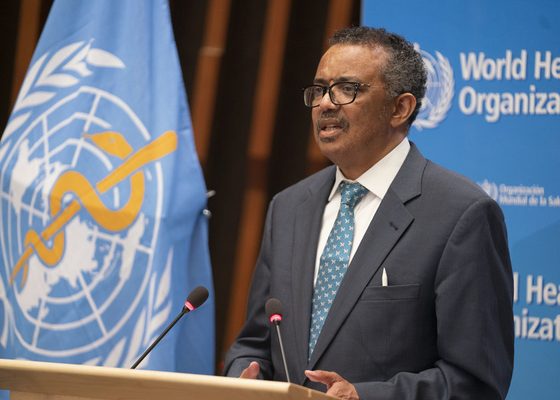 President Trump announced earlier this year that he intended to withdraw the United States and the funding that comes from it from the World Health Organization.

On Tuesday the United States officially withdrew from the WHO.

#BREAKING: The United States has withdrawn from the @WHO.

The White House has officially withdrawn the United States from the World Health Organization (WHO), a senior administration official confirmed Tuesday, breaking ties with a global public health body in the middle of the coronavirus pandemic.

The U.S. withdrawal is effective as of Monday and has been submitted to the United Nations secretary-general, the official said.

Sen. Robert Menendez (D-N.J.), the top Democrat on the Senate Foreign Affairs Committee, tweeted that the administration informed Congress of the withdrawal.

Congress received notification that POTUS officially withdrew the U.S. from the @WHO in the midst of a pandemic.

The formal notification of withdrawal concludes months of threats from the Trump administration to pull the United States out of the WHO, which is affiliated with the United Nations. President Trump has repeatedly assailed the organization for alleged bias toward China and its slow response to the coronavirus outbreak in Wuhan.

Democrats and health experts have warned this could undercut the global response to the virus arguing that the initial missteps were due to China’s lack of transparency.

**This story is BREAKING. Continue to check back with TTN as updates become available.**

Great with getting out of The Who. What will Bill Gates and Fuci do now!!

Those two will probably get back to their competitive Video Games. They don’t seem to be good for anything else…certainly not viable knowledge about COVID-19.
Hmmmmm. Who woukd win in Grand Theft Auto? That game should be renamed “Grand Theft Life” starring Fauci. Gates can find his own game about Controlling the Web. Nope, my bad. Google should find their own gaming: “Silencing Conservative Speech” I & 2.

Anyway, Excellent move getting away from the World Health Organization with close ties to the United Nations. The U.S. is done with “Users” and “Abusers”.

They will do nothing but trash the President freely…..

Next should be the UN. Time to kick these azzholes out of our country. GO TRUMP GO!!!

I agree totally and have been saying it for years. Why are we in an organization and hosting one on our soil where the majority of the members hate America. They laughingly take our money with one hand and stab us in the back with the other. Every time a bunch of their mainly wimpy peacekeepers get their butts kicked all over the block they run to us for a rescue mission. I say get out now and send them packing.

Linda U
Reply to  KDS

I am all for that…

The globalists are so screwed!

The UN doesn’t really care if we want to withdraw from any of their committees, they just want our money. Without our money, they would not be able to promote their anti-American agenda and their push for a one world government.

This is great news! Thank you, President Trump. The World Health Organization is a useless CORRUPT organization. If so many people were not so stupid they would realize that the WHO actually made the Wuhan Virus (Corona Virus) significantly worse. If they would have done their job they could have saved many lives.

The Director-General of the WHO (Tedros Adhanom Ghebreyesus) is both incompetent and corrupt. He is like a sock puppet for Xi Jinping and the Communist Chinese political party. He needs to go back to Ethiopia and disappear.

This was the right decision Mr. President. It makes good business sense. We can’t be responsible for footing every organization’s bill. We can’t footing the world’s bills. We’re not really getting much for our money. Perhaps you should be looking at the UN next. Now there’s a nest of vipers if ever there was one.

It’s comforting to see one of the most corrupt U.S. Senators in history complain that our president is making wrong decisions.

The wicked old WHO is dead!

The WHO has been anything but health! It has been pushing worldwide
abortions for years and is also very active in advocacy for homosexual,
lesbian, transsexual and any other immoral and deviate abnormalities.
Right, to fully stop support for any such vile organisms.

President Trump, I’m so glad I voted for you.
It’s like a breeze of fresh air, to see you standing up to WHO, and finally canceling our commitment to them.
Now step two is getting rid of the United Nations
and moving them elsewhere, preferably out of the United States.
God bless you , stay healthy, I’m praying for you to get reelected

Given that the wife of the Chinese dictator Xi Jinping is on the WHO Board, this seems like a great move!

You have GOT to watch this about what the W.H.O. is all about:
https://youtu.be/nADYnnL-JUs

So it’s about time, to leave those that fail to do their job, WHO? that’s who. They failed in every way to warn the people of the world about this virus. And WHO tried to cover it up for China. Bad ordeal, for the UN WHO and the world, for China and the rest of the world. China had sent bad stuff to the US for years, remember the bad Pet Food for Dogs and Cats…? Thousands of American Pets die from poison food for our pets here.
Now thousands of American people are dying from their China Flu.
Time to break ties with them all.
Thank you President Trump.