NEW YORK — Perhaps the most terrifying thing about the Left’s rampant statuecide is how easily these radicals have swiped or yanked down hundreds of America’s historical monuments. While my Fox News Channel colleague Tucker Carlson valiantly resists these destructive mobs electronically, virtually no one on the Right has stepped up physically to defend these cultural treasures.

The most conspicuous exception to this depressing rule is Gavin Wax, 26, the charismatic president of the New York Young Republican Club. Beyond leading America’s oldest and, under his energetic stewardship, now largest YR organization, Wax has spearheaded a public campaign to save the 81-year-old statue of Teddy Roosevelt that patrols the entrance to Manhattan’s Museum of Natural History. With the active encouragement of New York’s Sandinista mayor, Comrade Bill de Blasio, Leftists are laboring to pry Roosevelt’s depiction from its pedestal.

“Our nation is at an inflection point, and the people are realizing it is time to stand up for our nation against this Leftist horde bent on destroying our past,” Wax tells me. “Teddy Roosevelt was a great American, a proud American. He bled for this country and loved it with all his heart. If we can’t defend Teddy, we cannot defend anything. The time is now to push back against this cultural revolution.”

And push back Wax has done.

First, NYYRs issued a stirring statement expressing the group’s “unreserved disgust and outrage with the de Blasio administration’s shameful decision to remove the monumental statue dedicated to President Theodore Roosevelt on Central Park West.” The 20-to-40-something Republicans continued: “We hope that the opportunity for all who pass by to see this enviable role model will not be stolen by rascals intent on crushing the American spirit and foisting upon all Americans the dark shroud of socialism.” 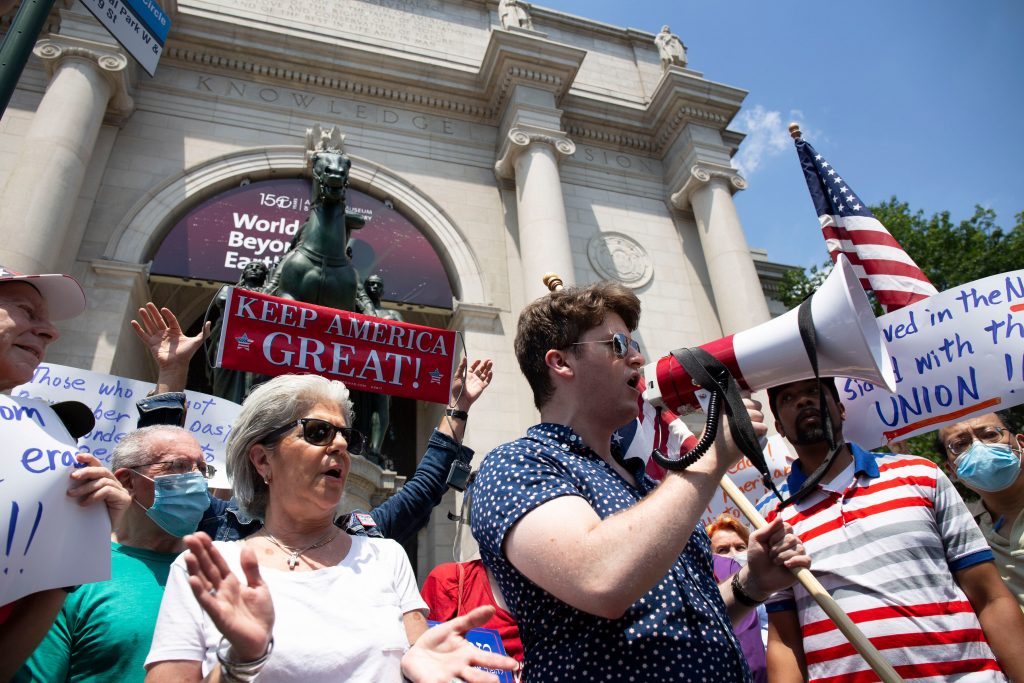 Second, Wax staged a June 28 rally to support TR’s statue, in conjunction with Young America’s Foundation and other conservative groups. This event lured some 200 fed-up citizens into the sizzling sunshine.

“Teddy lived in the North and sided with the UNION!!” one sign exclaimed. “Defend our monuments!” urged another.

“Where are our leaders?” Wax demanded into a megaphone. Clad in reflective aviator glasses, he added: “We have plenty of weak, limp-wristed Republicans in office who do nothing. Where are they? Where are they for our statues?…Thank God we have someone with some balls, some chutzpah in the White House!…The other day, he signed an executive order that gives up to 10 years in prison for anyone caught defacing or destroying American monuments. God bless that!”

These warriors for Western civilization closed by singing “The Star Spangled Banner.” Then, as the humid, 89-degree afternoon steamed them like snow peas, Wax freed his audience with this advice: “Let’s go home and take a shower.” 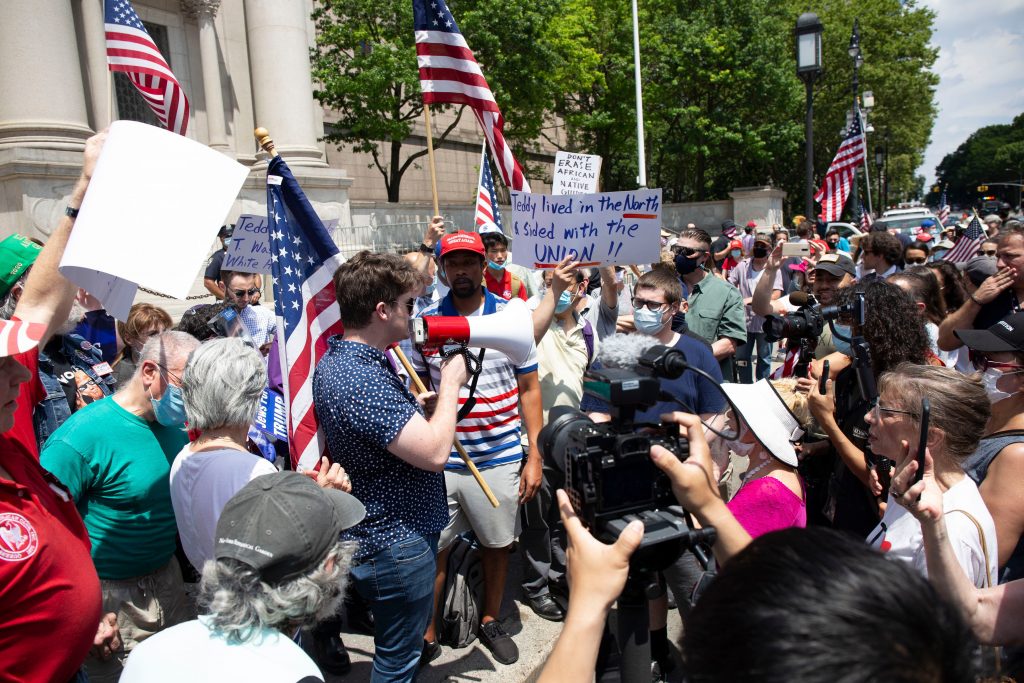 Third, this event generated abundant publicity in print, online, and on-air. This included Wax’s numerous radio and TV interviews. A recording of his fiery rally speech garnered 334,400 views on Twitter, scored 2.6 million plays on Facebook, and appeared the next evening on Tucker Carlson Tonight.

“We have been covered in the failing, so-called ‘Paper of Record,’” Wax recounts, “Fox News, New York Post, New York Daily News, The Daily Mail, National Review, The Daily Wire, Yahoo News, NTD, The Daily Caller, and many other smaller outlets, including the French press.”

To capsize Edmund Burke’s maxim, this geyser of positive ink confirms that the only thing necessary for the triumph of virtue is for good men to do something. “At long last!” these headlines virtually chanted.

Why did this counterrevolution finally arise in Manhattan, of all places?

“We are in the belly of the beast here in New York City,” Wax explains. “We in many ways, are a few years ahead of the rest of the country in terms of Leftist dystopian leadership. We see it the second we leave our apartments. Trash, filth, homelessness, crime. Being on the front lines is what allowed us to be the first in the nation to lead the charge.”

Wax also detects a disjunction between the early, peaceful, anti-police-brutality protesters and the rioters who swiftly seized this movement’s steering wheel.

“It has absolutely nothing to do with George Floyd,” Wax declares. “He was a convenient springboard for the Left to launch their revolution to destroy this country. This is not about helping black communities or fighting injustice. This is about regime change and power.”

As for the statue itself, a simple question occurs: What’s wrong with it?

This landmark features a robust Roosevelt on horseback, flanked by two males: an equally fit Native American Indian and a likewise muscular African. They represent the two continents where TR hunted and otherwise communed with nature. All three men stand tall, erect, and self-confident. Regardless, Leftist busybodies and ethnic psychotics deem this statue — what else? — racist.

While Roosevelt’s depiction does not involve slavery, segregation, or any other ugliness, America-haters complain that its composition is “hierarchical” and, thus, “problematic.”

James Earle Fraser’s 1939 statue honors Roosevelt. So, no shock, he is positioned higher, which establishes him as this piece’s focal point. The hierarchophobes who denounce this work must despise Da Vinci for putting Jesus Christ at the center of The Last Supper (circa 1495).

Who does Jesus think He is, the son of God? How dare He? Why doesn’t He go sit at the far end of the table?

If these malcontents had their way, Emanuel Leutze’s Washington Crossing the Delaware (1851) would be repainted, to make Washington sit in the Durham boat on Christmas night 1776, not tower commandingly above his men.

And if the mob could re-do Jacques-Louis David’s 1801 masterpiece Napoleon Crossing the Alps, the French emperor would have dismounted his white steed and walked behind it, to undermine anthropocentrism.

We would not want to make our equine brothers and sisters uncomfortable, now would we?

The historically comatose statuephobes totally have ignored Theodore Roosevelt’s ethnically egalitarian words: “I cannot consent to take the position that the door of hope — the door of opportunity — is to be shut upon any man, no matter how worthy, purely upon the grounds of race or color,” TR wrote in 1902. “Such an attitude would, according to my convictions, be fundamentally wrong.” Similarly, Fraser stated that, in his sculpture, the two men who flank Roosevelt represent the 26th president’s “friendliness to all the races.” As president, this Republican hosted Tuskegee Institute founder Booker T. Washington for supper in 1901. This made the former slave the first black guest to dine at the White House.

Simply put, people like Bill de Bolshevik, who argues that the Indian and African in this work are “subjugated and racially inferior” should check their white privilege. They, not Wax and his followers, are the bigots who infantilize the two brave men cast beside Teddy Roosevelt in bronze.

As for Gavin Wax’s outfit, there is more to come.

“We intend to organize and host more rallies in order to defend American history and our rights,” a New York Young Republican Club communique promised. “We will not cower in the face of the mob. We will not kneel. We will not apologize.”

Deroy Murdock is a Manhattan-based Fox News Contributor, a contributing editor with National Review Online, and a senior fellow with the London Center for Policy Research. He serves on the advisory board of the New York Young Republican Club.

Advertisement
Help President Trump STOP Joe Biden [ACT NOW]
Retailer Wayfair Faces Accusations of Child Trafficking, Here is What You Need to Know
Trump Reveals How Much of The Border Wall Has Been Built

Americans must be on watch. WE MUST DO WHATEVER IT TAKES TO DETER THESE FELONS. We must also, PUNISH THOSE IN OFFICE WHO ARE SILENT. .

Perhaps we can refashion the statue, make it mechanical, and have the three figures rotate, taking turns sitting atop the horse. People are crazy. Kudos to our schools for destroying common sense in our youth.

Where are our leaders? With few exceptions, they’ve wussed out.