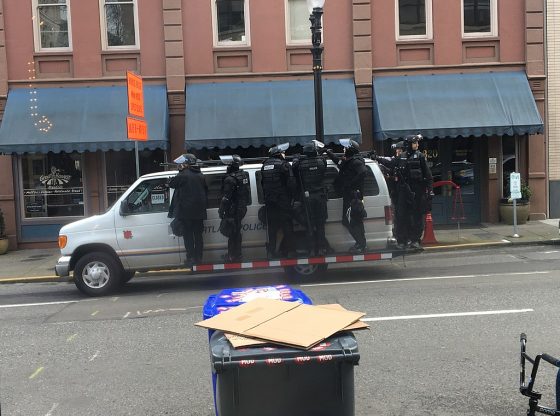 A video journalist who is supportive of President Trump was viciously attacked last weekend in Portland.

He believes a group of people began to follow him after realizing who he was from his videos and pro-Trump support.

Ducomb approached a man who was following him. The man then pulled out a knife and stabbed him in the back.

According to The Daily Mail, Ducomb traveled from Northern California to Oregon to cover the protests because “he wanted to offer a more complete view of the situation than what has been portrayed in the mainstream media”.

The stabbing suspect has been identified as Blake David Hampe. He has been arrested and charged with second-degree assault and unlawful use of a weapon.

Ducomb spoke to Tucker Carlson and told him “I was stabbed by a known Antifa member by the name of Blake Hampe. I felt like I was stabbed, or targeted, specifically due to my location being doxxed … 17 hours before I arrived.”

Ducomb explained that it was such a traumatic experience he can’t remember if the attacker said anything to him and the knife appeared to be seven inches long.

He said the knife went 4 to 5 inches into his body and he was lucky it did not hit any major organs. Miraculously, no surgery was required.

If your argument is good and you believe in what your saying and doing, then you shouldn’t need to silence others with the apposing argument or belief. In my humble opinion, when I see one side needing to silence the other sides words, then I know who is the clear winner.

What we see is these cowards can’t do anything like this on their own they need reinforcements. They are pathetic wimps.

Good way to tell. We get lots of very clear messages. Vote only for Republicans in November

Just another peaceful protester. NOT !!!!

Freaking sad, has the liberal states lost control, or is it they just don’t care? I’m thinking the latter and in fact, encourage these aggression’s. .

it’s an election year and their goal is to blame Trump for all or their shortcomings.

Instead of correcting there own problems always blame Trump typical democrat reaction.

No; they DO care! This is part of their PLAN; to DESTROY AMERICA!!! That’s what Commies & Nazis DO! They LOATHE Freedom!

OMG! This has got to be stopped!! Where are the Republican congressmen? Hiding under their desks? Or hiding in their basements like Quid Pro Joe? ENOUGH!! The police and the Federal agents have got to be turned lose on these criminals~~ NOW!

That’s the way it’s going to be for a very long time. It would nice if every person that supports or propitiates in this kind of activity would JUST DROP DEAD.

…yes, of the corona virus

I love your use of the word “propitiate.” So appropriate for what is happening today, propitiating to the “anger” of the mob. Good for you, Bobby Jay.

Turn the militias and the Hells Angeles lose on these creeps, it would be over soon as they showed up.

So this is “tolerance?” The day is coming where these thugs will be on the receiving end of an outraged citizenry. Keep your powder dry and hatchet scoured.

You know this is ok because he was a peaceful protester. The elected politicians shouldbe ashamed of themselves, especially the Mayor.

What has to be done to stop this violence? And why does the Democratic leadership continue to pretend that this is not happening? Federal Govt. has to hold them personally accountable. Not to mention the perpetrators being tried as home grown terrorists.

Blame Trump for everything they started.

yes nadler said that it’s a myth when barr was testifying.i think he has the same disease as biden!

They are full of you know what, dems lie and lie.

Yup, peaceful protestors? What a joke and it was antifa with a mask on. Jail is too good. He deserves what he gave, a knife in his back! These terrorist need to be arrested. This is brownshirts of Hitler per Soros wishes all over again. Declare them to be what they are, domestic terrorist!!!

Have them come to their homes for a picnic.

Need to shut down all cell phone service in Portland and other hot spots so these antif animals can’t communicate .Such as where to be at what time, who to dox and what tools/weapons to bring.

The putrid stink of drug corruption money.
Now the leaders of which cities are covered in that.

Lock him up with bubba let him learn the hard way.

How is the intentional stabbing of someone, using a 7” knife, a 2nd degree assault?

“A known Antifa member.” He had the membership card and everything!!

This is pathetic and nonsensical. He said his “location was doxxed … 17 hours before I arrived.” Using a lot of scary internet words to freak out hapless people in middle America. And if these protests are really so violent and scary, what a brilliant idea to wander into the middle of one.

At least the person responsible was arrested. Imagine if he’d been shot in the face or pushed to the ground by unmarked militia members or repurposed Border Patrol guys? Well, they just get to walk away and do it to someone else! Don’t hear much from “Small Government Republicans” right about now, who for years were TERRIFIED of federal agents in the streets, taking over cities. Hypocrites, all.

“Second Degree Assault”, how about charging this man for attempted MURDER and for a HATE CRIME. He recognized someone as a conservative and attacked him because of his POLITICS. that meets the definition of a hate crime. I say arrest the prosecuting attorney for not doing their SWORN duty.

Oregonians, I knew a time when you were SAME people and I LOVED being in Oregon. It is time to rise up and take arms and take back your State or to lose all rights of any kind. The tree of liberty must be pruned with the blood of patriots…so you can DIE in submission to these criminals and insane people and allow your politicians and appointed bureaucrats to continue to KILL you and your society…or you can rise up like MEN and take your State over again.

Radical persons who show up at all the Peaceful Protests should be identifies, arrested and tries as the criminals they are. Exciting violence is NOT Peaceful Protesting. To look at George Floyd die on national TV should make all Blacks in America upset. It made me upset and I am not Black. The Peaceful Protesters should make these Radicals known to the police and removed them from their ranks. Sadly, when the trouble starts many Blacks become rioters, looters, and begin to burn down building and take down statues. None of these actions are Peaceful, but they do make those acting this way criminals. If these criminals get arrested and convicted they will have to live with a criminal record for the rest of their lives. It is hard enough already for ex-cons to gain employment. If a crime is done on Federal Properties their conviction will mean a heavier sentence because Federal Laws do not give the criminals a get out of jail free card. Cities and States may pass their laws, but in the long run, Federal Authority trumps city and States laws that apply to Federal Law jurisdiction. If City and State officials will not act to protect Federal Properties the Federal Government will. This has been the law from day one in these United States, so as long as we have a US Constitutional Republic it will remain the law.

Perhaps a sad question, but given the circumstances appropriate. How come this journalist was not armed?

Is anyone really surprised a known Antifa member, Blake Hampe, would stab a Trump supporter in the back?