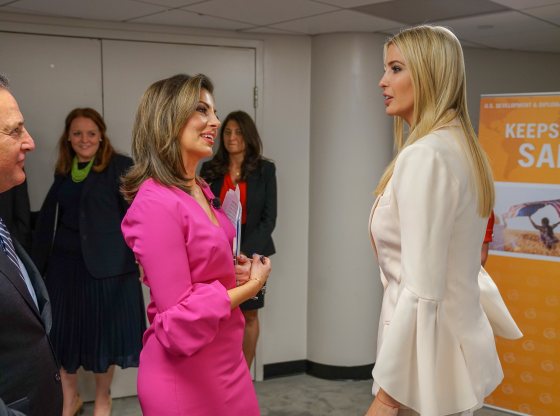 Ivanka Trump and Attorney General Bill Barr are teaming up to distribute grants to survivors of human trafficking.

Special advisor to the president, Ivanka Trump, is headlining a roundtable in support of human trafficking victims that will highlight a new initiative from the Department of Justice that allocates housing grants to survivors, a White House official told reporters. Trump will be joined by Attorney General Bill Barr, Acting Director of the Domestic Policy Council Brooke Rollins and Special Advisor for Human Trafficking Heather Fischer. The administration officials will also be joined by executives of organizations that work to combat human trafficking.

The grants come from the Office for Victims of Crime, under the umbrella of the DOJ’s Office of Justice. The office will allocate $35 million in housing assistance grants to organizations that work to fight human trafficking, in order for survivors to be afforded safe and secure housing.

The first daughter has used her capacity in President Trump’s administration to make tangible progress in the fight against human trafficking and said that these grants will empower survivors to “rebuild their lives”:

“In the midst of the COVID-19 pandemic, combating human trafficking in the U.S. and abroad is critical work. DOJ’s grant recipients are on the frontlines of this fight, ensuring that survivors across our country are afforded safe and stable housing and empowered with the support and resources they need to rebuild their lives,” she said. “I am incredibly honored to join Attorney General Barr to highlight these organizations and their tireless and vital work.”

The grants are made possible by an executive order signed by President Trump in January of 2020.

Democrats, deep state and left are all about human trafficking.

you can be sure that the first thing that Democrats will scream about is the picture since nobody is wearing any masks. They really don’t care if Ivanka is helping victims of human trafficking. They just want to find little thing disrespectful about her or her family.

Gee, why didn’t I see this story on my local news? Guess it’s just not “news”.

I don’t get it…..who the hell would allow themselves to be snatched and held captive by lowlife ‘s ? Surely an opportunity to escape comes along…I think this human traffic stuff is a bunch of crap…don’t believe it.

By the time Trump completes his 8 year term , Ivanka will have 8 years WH experience working hand and hand directly with the President . And at times even closer than our Vice President. She has been involved with every aspect of the Presidency including meeting N. Korea’s Kim Jung Un , ( something Obama wasn’t capable of pulling off. ) Foreign policy , domestic issues , trade , and more .Point being Ivanka Trump will be hands down the most qualified , experienced ,capable and electable candidate for the 2024 U.S. Presidential Election. No doubt and unavoidably our first woman POTUS. And we will assuredly be in the very best hands. If you can’t see it , just continue to sit in your parent’s basement and wait for it . With almost 4 years under her belt it’s a certainty. Maybe she will be the one to roast some criminal swamp creatures.