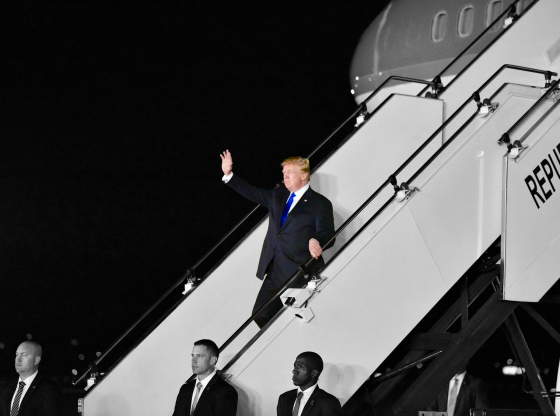 Fifty-one percent of people approve of President Donald Trump’s performance as president, according to a poll from Rasmussen Reports released Monday.

The survey company’s Presidential Tracking Poll said that 47% of people disapprove of his job performance.

The survey also shows the divide between the 40% of those indicating they strongly approve of Trump’s job performance and the 41% who strongly disapprove. “This gives him a Presidential Approval Index rating of -1,” according to the pollsters.

Recently, a series of polls indicated Trump is trailing presumptive Democratic presidential candidate Joe Biden. A Rasmussen poll released July 29 showed that Biden was leading Trump by 48% to 42% in voter support. The current RealClear Politics average of polling has Biden with a 7.4% lead over Trump.

Mid-July polls by Rasmussen had the company declaring Trump was back in the race with Biden at 47% and Trump at 44% while another poll showed that 54% of people didn’t think Biden could effectively debate Trump.

Advertisement
Jim Jordan Needs YOUR HELP [ACT NOW]
MSNBC Producer Quits, Reveals What It Was Like On the Inside
7 Witnesses Who are About to EXPOSE Antifa

Dems Reveal Agenda if They…

These 10 Dems are Panicking…

Kamala Harris Accused of a…

I was very pleased to see Trump rising in the polls! He’s been a splended Pres. for America since his election as President and I’m certain that he’ll continue in the same vein in his four years!

So the DERANGED SOCIALISTS can RIGG, HARVEST, and HIDE MAIL – IN BALLOTS !

Lew Tripp
Reply to  N A

Again, there are many of us that won’t allow the libdemRATS to cheat by any and all means possible.

No surprise here. Trump supporter are all sitting back and waiting for the election to give him a landslide. Most won’t even bother to admit to pollsters that they are Trump supporters so the numbers are really better than this report indicates.

Agreed! Time for the tyrants to pay the price and that includes the full extent of the law that is written in the Constitution DEATH TO ALL TYRANTS WHO HAVE COMMITTED HIGH CRIMES OF TREASON AGAINST WE THE PEOPLE! 😊 and 🖕🏻The demonrats!

About time they started to show the truth. Id the dems would quit trying to destroy him a lot more could be done. But….

Trump will destroy the senile,old,fool, slipping,slo,joe, even with all the fraudulent BS, they are going to try and pull, Trump can save this country,dementia joe, like obuthead, will destroy America,and we won’t let that happen. Trump in a landslide in 2020.

This is some long awaited ‘Great News’, love it.

These polls are crap just like the fake news media.. I wasn’t polled!!! And they are dead right President Trump would smash Biden in a debate he can’t even talk issues out of his basement he’s a puppet on a string they are just using that dust rag to get in the door… If it works ….. Personally I don’t think he’s got a chance without cheating the vote!!!!!

Given the number of conservatives who decline poll interviews, in addition to the “fake” polls that oversample demonKKKrats, plus the 95+% fulltime negative reporting conducted by the Lame Stream Media, this 51% appears to be an extremely conservative number.

Nonetheless, despite all of the obstacles thrown at President Trump over the past 4 years, his polling is HIGHER THAN 0bama’s at this same point in his regime. That should really tell anyone with 1/2 a brain something…

Lets hope the good news gets better!
I can’t understand why ANYONE would vote for Joe Biden. But don’t underestimate Democrats, they don’t care HOW they win! Trump supporters MUST SHOW UP ON ELECTION DAY!

Unfortunately Democrats control most of the critical states that will be close, like Penn, Wisconson, Nevada, and others. They will ensure that ballets are mailed out to everyone, qualified and unqualified voters. There will be huge voter fraud in those states to steal the election. If Trump’s turn out is not super, and even if it is, he may still loose by thaft of the election. Dead voters, illegal aliens voting, out of state voters, and duplicate ballets. If Trump still manages to overcome all that and win. They are already planning civil war by having California, Oragon, and Washington State secede from the union if Trump wins. If he looses within 6-MONTHS after Biden wins they are screwing up the country so bad the right revolts. Anyway you look at it Boogaloo is coming.

That’s very good to hear. I hope it only keeps going up from here. The President needs a big win to solidify the success of this country. KAG 2020

We do not need a new President we need a new Congress. One with term limits.

The African=American,Hispanic vote alone will carry Trump To victory, these dummycraps have no idea, what is about to hit and crush them, along with their karma.

The Demon-Rat Sewer Critters will Cause Americans to have a Civil War if Sleepy Joe wins. Starting with the Rats in Congress. They are the ones who started all this BS. They need to clean up their acts soon. We all can vote for other People that will RESPECT our Laws in the Constitution, Not add to it or change it’s Laws to further their own agendas. We the American People are watching!!! DRAIN THE SWAMP AGAIN!!!