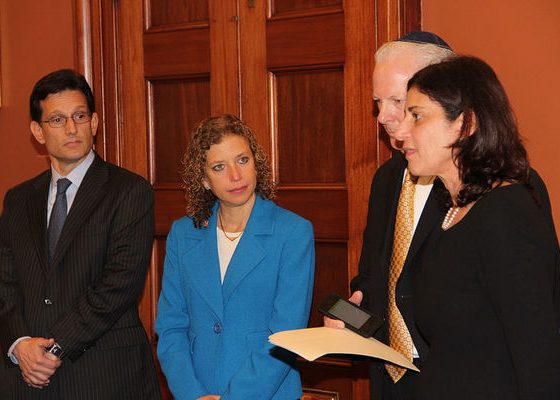 Democrat Representative Debbie Wasserman-Schultz has been accused of assaulting a rival campaign volunteer who also is a minor.

Rep. Debbie Wasserman Schultz, D-Fla., has been accused of shoving a high school student who was volunteering for the campaign of a Democratic primary challenger.

Martina Velasquez, 16, told the Miami New Times that she was handing out cards and trying to speak to potential voters on behalf of candidate Jen Perelman outside a Broward County polling location Saturday when the former Democratic National Committee chairwoman allegedly pushed her.

“She, every time, would come and shove me out of the way into a group of other poll workers, moving my arms so I couldn’t give out a palm card,” Velasquez told the publication. “She was saying, ‘That’s my opponent, that’s my opponent, you can’t vote for her.'”

Perelman shared a video of Velasquez giving her account of what allegedly happened and calling Wasserman Schultz a “monster.”

This is my volunteer, Martina Velasquez, who was shoved & accosted. #DebbieMustGo https://t.co/OGVWym6tH4

Will this to amount to anything? Perhaps a public apology, perhaps not.

Either way, I’m beyond proud of the courage it took this young lady to stand up & do this.

Our elected officials are supposed to be held to a higher standard.

Wasserman-Schultz is facing Perelman in the Democrat primary which is one of many across the country where progressive candidates are trying to unseat entrenched Democrats.

Advertisement
HELP: Sign CDP's Letter to Facebook [ACT NOW]
Rush Limbaugh Points Out Scary Omission Made by Democrats
Here is What You Need To Know About The Mail-In Voting Conspiracy Theory