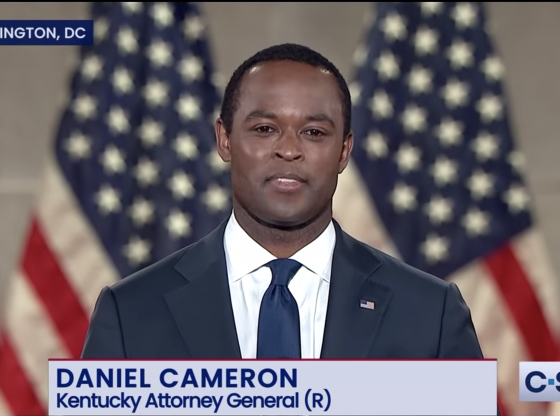 Cameron opened by slamming rioters for tearing down statues of American heroes such as former presidents Abraham Lincoln and Ulysses S. Grant while quoting Lincoln saying, “Any nation that does not honor its heroes will not long endure.” Cameron said that despite the divisive aims and destructive acts of “anarachists,” he and other Republicans “recognize those who work in good faith toward peace, justice, and equality.”

“Republicans will never turn a blind eye to unjust acts, but neither will we accept an all-out assault on Western civilization,” Cameron said, referring to ongoing riots and looting that has continued sporadically in major American cities since the death of George Floyd in late May.

“So the question is, will we chose the path that gives us the best chance to meet those universal desires? Or will we go backward to a time where people were treated like political commodities who can’t be trusted to think for themselves. I think often about my ancestors who struggled for freedom, and as I think of those giants and their broad shoulders, I also think about Joe Biden, who says, ‘If you aren’t voting for me, you ain’t black;’ who argued that Republicans would put us back in chains; who says there is no diversity of thought in the black community.” Cameron said.

“Mr. Vice President, look at me. I am black. We are not all the same, sir. I am not in chains. My mind is my own and you can’t tell me how to vote because of the color of my skin,” Cameron said, addressing Biden. “Joe Biden is a backwards thinker in a world that is craving forward-looking leadership. There is not wisdom in his record or plan, just a trail of discredited ideas and offensive statements. Joe Biden would destroy jobs, raise our taxes, and throw away the lives of countless unborn children.”

Cameron went further, alleging that Joe Biden is captive of the radical left a group that believes skin color must dictate your politics.

Advertisement
Send the Next GOP SUPERSTAR Kim Klacik to Congress [ACT NOW]
Melania’s Sobering Speech Delivers Message to the Media, Draws Praise From CNN
Trump Makes Left Lose it When He Presides Over Naturalization Ceremony During the RNC

The FBI should investigate HiTlary and her buddy, Barack, they both need to be investigated for many. questionable emails, and events in their alleged service to our country. They ARE hiding something……….my opinion……..

Republican took the people out of chains .who won the civil war ? Who wanted to keep the chains ? Democrat 🤔

Mr. Cameron is a patriot and a leader and role model for all americans to emulate! Kentucky, I salute you for an excellent citizen!

Mr. Cameron’s description of Joe Biden was spot on and was probably the most precise, well spoken explanation of what Joe Biden represents offered by anyone so far.

He is right. Biden has been in Govt employ for 47 years and has NOTHING to show that made any difference for the better in any Americans lives. Perfect example for TERM LIMITS.

You know , Daniel, your not black unless you vote for Joe. He said so!

DANIEL CAMERON was RIGHT ON and has a MIND to think and make his own decisions
and like ALL Blacks are CAPABLE of making CHOICES and making INTELLIGENT DECISION on who to vote for to make AMERICAN GREAT AGAIN FOR ALL PEOPLE !!!
NO LONGER ‘PONDS’ OF THE ‘DO NOTHING DEMOCRATS’ for VOTES EVERY FOUR YEARS!!! TRUMP HAS DONE MORE FOR ‘MINORITIES IN THE LAST FOUR YEARS THAN DEM’S IN THE LAST 40 YEARS….FACT !!!

We have to fix the education system, they are responsible for filling kids heads with all the racist hate in America and we need to shut down the propaganda coming from the media that is calling them selves news , it’s the only way to fix this

I wonder why the news medias always call people colors or shades when they refer to a person????? The news is the one stirring the coals of racism! People are human being created by GOD in his image, so doesn’t that mean we are all born from the same tree. Related to all living things. So, why does the news medias disrespect people by labeling them as something else other than the name we were born with, which is respect for someone. But to call a person a color instead of his name he was born with, is racist and disrepectful!!!!!! TREAT A PERSON WITH THE RESPECT THEY DESERVE, NOT LABELING THEM AS A COLOR!!!!!👎👎👎👎👎🇺🇸🇺🇸🇺🇸🇺🇸🇺🇸 ALL PEOPLE ARE CREATED EQUAL, PLAIN AND SIMPLE!!!!!👍👍👍👍👍🇺🇸🇺🇸🇺🇸🇺🇸🇺🇸

DEBORAH B Nichols
Reply to  Last of the Patriots