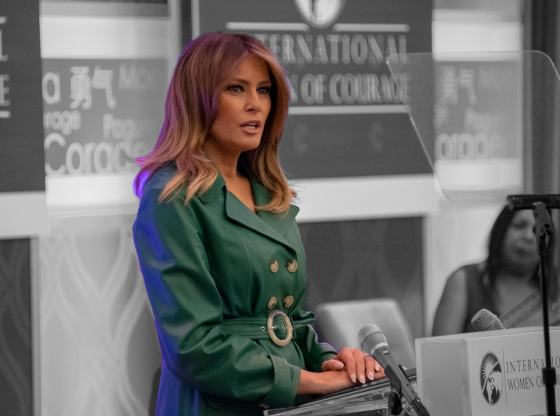 Melania Trump delivered a sobering speech at the RNC that drew the praise of CNN even though she sent a strong message to the media.

Town Hall reported on the speech:

“I know I speak for my husband and the entire family when I say we have not forgotten the incredible people who were willing to take a chance on a businessman who had never worked in politics,” Melania began.

Much of her speech, however, was somber as she dwelled on the impact the coronavirus has had on the country. Since March, she said, “our lives have changed drastically.”

Having just been the victim of another round of media hazing thanks to her renovation of the Rose Garden, which hadn’t been updated since the Kennedy administration, Melania spent a few more moments warning Americans not to believe everything they hear or read.

“No matter the amount of negative or false media headlines or attacks from the other side, Donald Trump has not and will not lose focus on you.”

.@FLOTUS Melania Trump: “Like all of you, I have reflected on the racial unrest in our country. It is a harsh reality that we are not proud of parts of our history. I encourage people to focus on our future while still learning from our past.” #RNC2020 pic.twitter.com/CXw68zfcce

First Lady Melania Trump at #RNC2020: "No matter the amount of negative or false media headlines or attacks from the other side, Donald Trump has not and will not lose focus on you." #RepublicanConvention pic.twitter.com/OngHBX9sS7

CNN, a strong and vocal critic of the Trump administration and first family heaped praise on the First Lady.

According to The Daily Beast:

Immediately after Melania Trump’s largely humanizing and empathetic speech at Tuesday night’s Republican National Convention, the analysts and hosts at CNN were effusive with their praise for it, applauding the first lady for expressing sympathy for victims of the coronavirus pandemic and addressing racial unrest.

“The first lady doing something that I don’t think that any other speaker has done in the two days of the Republican National Convention have done, addressing pointedly and movingly the No. 1 crisis issue facing the United States right now: the coronavirus pandemic,” anchor Wolf Blitzer said at the conclusion of Trump’s address. “As she expressed her deepest, deepest sympathies to all those who have suffered, the families who have lost loved ones, she promised that her husband would work for treatments, and a vaccine to take care of everyone.”

Blitzer went on to say that was an “important statement” on her behalf, calling it a “moving speech” and that it was “important” that the first lady said she didn’t want to “attack the other side” like everyone else at the convention.

Anchor Jake Tapper agreed with Blitzer, asserting that her address was a “stark contrast” to her husband and the other convention speakers since she expressed “strong sympathy for individual suffering through the two major crises” in America: the coronavirus and racial strife.

Even CNN couldn’t deny the brilliance of the First Lady.

WRONG! Only Republican conservatives are censored besides, the Chinese love Dems!

Melania is a powerhouse of kindness . Every woman is capable of being kind and caring. She exemplifies goodness that all people should emulate,

Yes, ALL women. That includes YOU, Nancy Pelosi! Not holding my breath.

FIRST LADY MALANIA was TERRIFIC !! BUT her husband is in the FIGHT for AMERICA’s FUTURE.!! Like Patton in WWII, PRESIDENT TRUMP must OUT THINK AND OUT MANEUVER .the ANTI-AMERICAN FASCIST CROWD RNORDER TO SAVE AMERICA’S EXISTENCE. AMERICA’S TOTAL EXISTENCE IS ON THE LINE, And HOPEFUL WORDS will not stop the SENSELESS LOOTING and BURNING. Time for ACTION’ WHEN REASONING AND COMMON SENSE have been IGNORED BY IGNORANT HATEFUL MOBS! GO TRUMP 2020

Howard
Reply to  FED UP

If Trump cannot “out think and out maneuver” the brainless Anti Americans on the left, he should resign. He’s outdoing them every day with positive results in the White House and with his wit and humor giving them crap that they have no come back for.
He’s going to win the election in a landslide.

YES–America’s future depends on a Trump win. The progressive democrat socialists on the left are trying to turn us into a Venezuela of the north.

Finally, there is a First Lady who HAS SENSE as well as POISE with CLASS!

Melania is the most gracious, beautiful, magnificent, well spoken First Lady ever! As usual, her speech was delivered flawlessly AND, I love her accent in spite of the classless attempt to insult her made by Buffalo Bette Midler who is a ugly beast, even by Buffalo standards!

Melania was excellent during her monolgue. Especially when she started warning Americans not to believe everything they hear or read.

TTN; this publication is included. It is difficult not to see some of TTN comments
are not pro-Trump. Who is the editor here, is he/she one of Rino Romney’s cousins?

Get it together TTN; is this publication American friendly or just another swamp tabloid?

This election is only between keeping the U.S. republic intact or turning over the reigns to the SOCOFA party; the coalesced splinter groups of the Democrat party name. The Democrat party is no longer a viable party.
SOCOFA is SOcialist COmmunistic FAscist. Us or them. Freedom or socialism/communism.
UNITED STATES of AMERICA or the
United Socialists of America. It’s our choice. I hope you are with us true freedom loving U.S. citizens!

“…her address was a “stark contrast” to her husband and the other convention speakers since she expressed “strong sympathy for individual suffering through the two major crises” in America: the coronavirus and racial strife.”

Yes, CNN was complimentary toward the 1st Lady, unfortunately the compliments were back-handed, trying to invoke further criticism toward the President.

You’re correct.The surprising thing that they so raised their standards that they could praise anyone with the name of Trump. There is nothing beneath them.

When decency rears its beautiful head even CNN succumbs.

What is surprising is that THE FIRST LADY’S speech, praised and appreciated by Blitzer and Tapper of CNN, was back slapped by Donna “BACK STABBER” Brazille on THE FIVE at FOX.
A true partisan, like Juan, she could not immediately after lauded the speech, in the same breadth stated that Michelle Obama’s performance and speech was better.
AND THE BACK STABBER CLAIMS TO BE A PERSON OF FAITH WHICH DEEP RELIGIOUS BELIEFS. GO WASH YOUR MOUTH WITH SOAP. AND KEEP DOING IT AGAIN AND AGAIN.

The Democrats plan for the U.S. is a Marxist government attained by Fascist methods fueled by a demented hatred of
63 million of their fellow citizens.
The way forward for them is the complete destruction of the middle class.
The remains will be an elite small government a small number of mega businesses and the military to keep the 350 million poverty stricken American slaves in check using brutal methods and slaughter.