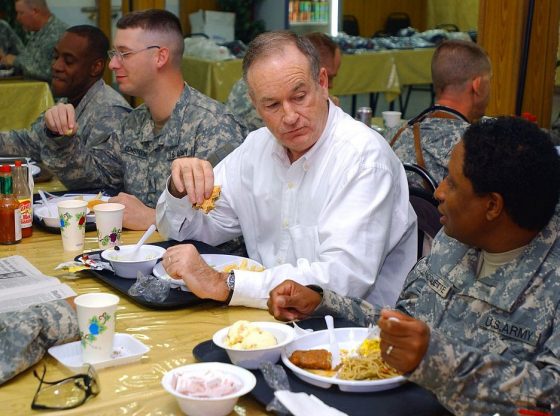 He is currently in contract negotiations with a New York-based radio station.

The network, 77 WABC, is owned by Trump supporter John Catsimatidis.

If the contract is finalized, Bill O’Reilly will debut his radio show sometime this fall.

“We are in the final stages of a contract and a program should be on in the fall,” Newman told CNBC through his assistant. O’Reilly’s representative also confirmed the talks were being held with 77 WABC. Catsimatidis confirmed the ongoing negotiations to CNBC.

“I wll confirm that, and I think he is one common-sense American,” Catsimatidis said of O’Reilly. He declined to comment further.

This won’t be Bill O’Reilly’s first time hosting a radio show. From 2002 to 2009, O’Reilly hosted a show titled The Radio Factor which aired from noon to 3 pm Eastern Monday through Friday. It was the second-highest rated show behind the king of talk Rush Limbaugh.

He eventually made his return to television earlier this year:

The show titled, “No Spin News” will air twice daily at 8 and 11 pm. Sound familiar?

According to Axios, the show will air on a conservative digital TV network called “The First”.

You might be wondering how you can watch it.

To watch it, you will need to download the PlutoTV app on a smart TV, Roku or Amazon FireTV stick. If you don’t have one of those, you can download the application on your Android or Apple smartphone (Details), or watch on their website at Pluto.tv.

We will keep you posted on Bill O’Reilly’s return to radio as negotiations continue.

READ NEXT: Trump Told His Supporters What Would Drive the Media Wild…and Then It Did [CLICK HERE TO FIND WHAT HE DID]

Advertisement
Send the Next GOP SUPERSTAR to Congress [ACT NOW]
Pelosi Could be the Next President; Here’s How
McEnany Shares Incredible Personal Story of Loss During RNC Convention Speech

It is wonderful seeing the LIKE MINDS working together to: Make America GREAT AGAIN! Yes, America, we must remain to be what we are as a NATION ~GREAT!

O’Reilly know his business, too bad FOX dropped him. Hope he gets his gig. I’ll be loading his app on my FireStick.

Well, better than nothin’ but O’Reilly ain’t no Rush Limbaugh.

Why, is that what he is claiming? I don’t believe it even if you say it is so.

O’Reilly is arrogant, pompous, egotistical, self-aggrandizing, and just plain rude! And it has nothing to do with women. He needs an attitude correction.

Bill still has to explain why, on the O’Reilly Factor in June of 2012, he completely silenced his guest, Rep. Chaffetz on the subject of gun control while declaring:
‘Anyone in this country can walk into a gun store and come out with machine guns, rocket launchers and heavy weapons’!!! Whaaaat???
This is the day I stopped watching Bill O’Reilly.
Lie much Bill? He is that kind of idiot New Yorker who cannot get past the liberal anti gun propaganda. It seems to me that he either knows better but lied for some reason, or he is so blitheringly stupid he cannot understand our anti-Constitutional gun statutes. If anyone can actually communicate with this bloviating blowhard, try to ask him to ‘splain his remarks, please. As far as I am concerned, he is just another confused independent who cannot decide in what Party he belongs.

Wish Bill would come back to TV!

The People’s Justice for All [videos] – Starship Earth: The Big Picture

When will you ban Mr louis from this site with his telecommuting nonsense?

Is This October Surprise Coming for Trump? - Trump Train News

[…] READ NEXT: Fox News Fired this Superstar Host. Now He Could Team Up With a Big Trump Ally [CLICK HER… […]

Could this be the start of an honest Conservative American PUBLIC news media. The whole country needs this alternative, not just the conservative cognoscenti.