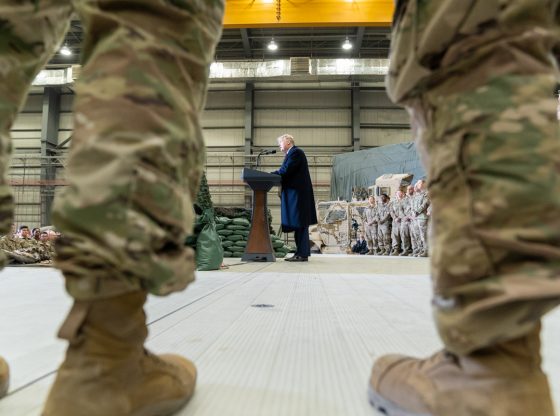 President Trump responded to a report by The Atlantic claiming he called World War I dead at an American military cemetery in France “losers” and “suckers” were a “hoax.”

He added, however, that the military is likely not in love with him because of his tough stance on NATO and his insistence to end the “endless wars.”

“I’m not saying the military’s in love with me,” Trump added, as he advocated for the removal of U.S. troops from “endless wars” and lambasted NATO allies that he says rip off the U.S. “The soldiers are.”

“The top people in the Pentagon probably aren’t because they want to do nothing but fight wars so all of those wonderful companies that make the bombs and make the planes and make everything else stay happy,” he added.

“Some people don’t like to come home, some people like to continue to spend money,” the president said. “One cold-hearted globalist betrayal after another, that’s what it was.”

Eisenhower wanred of the growing military-industrial complex in his 1961 Farewell Address.

“This conjunction of an immense military establishment and a large arms industry is new in the American experience … In the councils of government, we must guard against the acquisition of unwarranted influence, whether sought or unsought, by the military-industrial complex. The potential for the disastrous rise of misplaced power exists and will persist,” he said.

After fighting a brutal war & then serving eight years as US President, here was Dwight Eisenhower's 1961 warning about the menacing joint power of the US military and the private arms industry. This was before Vietnam, the Reagan Cold War build-up and post-9/11 militarism: pic.twitter.com/IRl8ZTdpIo

President Trump has touted deals with foreign powers to purchase American-made weapons made by defense contractors.