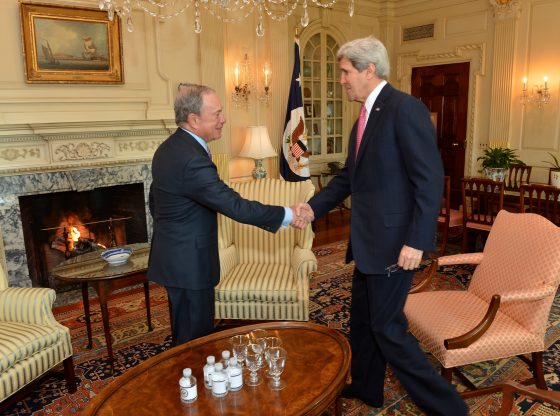 U.S. Department of State from United States / Public domain
| By: TTN Staff| Administration,Government,NEWS | 2066 | 4 comments
Advertisement
Make Sure You Are Registered to Vote For Trump [CHECK TODAY]

Sean McCutcheon, who campaigned for the Libertarian Party’s presidential nomination is suing the FEC in a move that could force the billionaire to take back a giant donation to the DNC,

Individual contributions are capped at $35,000 but Bloomberg bypassed this and transferred the remaining $18 million left in his war chest to the DNC.

This is being dubbed the “billionaire’s loophole.”

The FEC did not rule on Shaun McCutcheon’s previous attempt to challenge the legality of Bloomberg’s $18 million contribution to the DNC, so the former candidate is suing for protection to donate his own campaign funds to the Libertarian National Committee, according to the Friday complaint.

“Federal election law allows an individual to only contribute up to $35,500 per year to a political party – and that same limit applies to Mike Bloomberg’s transferred money– unless and until the FEC or courts approve Shaun McCutcheon’s request to do the same,” Dan Backer, attorney for McCutcheon, said in a press statement announcing the lawsuit.

Bloomberg “already has a SuperPAC – but unless the FEC or courts rule otherwise this isn’t one of them. It shouldn’t be this easy to just buy off a political party, unless you’re rich as Bloomberg, apparently,” Backer added. He filed a complaint through his group Great America PAC in March alleging the contribution is an attempt to circumvent campaign finance laws.

“[I]f Bloomberg broke the law, then Shaun should be allowed to do the same thing. If not, then it completely destroys the entire concept of contribution limits, because then anybody could start a campaign, dump all their money in, and transfer it to the parties,” Backer told the DCNF in June.

FEC Commissioner Brad Smith said that if the FEC allows this loophole of self-funded campaigns to not be subject to individual contribution limits you will likely see much more of this tactic moving forward.
Sean McCutcheon famously won the landmark free speech case McCutcheon v. FEC (2014) in front the Supreme Court in which the court overturned the federal government’s cap on aggregate contribution limits.
Advertisement
Make Sure You Are Registered to Vote For Trump [CHECK TODAY]
Federal Judges Rule Trump’s Immigration Order Violates the Law
LA County Health Director Claims “Schools Will Not Re-Open Until After the Election”