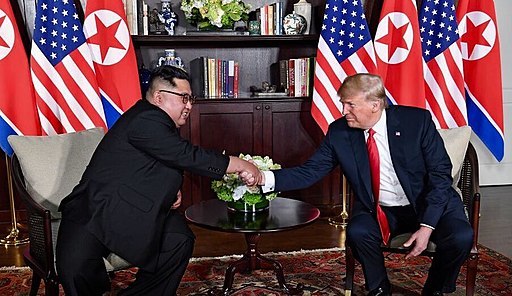 Speculation has grown over the health of North Korea’s President Kim Jong Un. Some reports have claimed he was mentally incapacitated or dead and that his sister was running the hermit kingdom.

No one really knew for sure, outside of U.S. intelligence, and President Trump has revealed the truth via Twitter:

Kim Jong Un is in good health. Never underestimate him!

The news follows excerpts being released of an upcoming book by Washington Post editor Bob Woodward, in which Trump sat down for a series of interviews.

In it Trump revealed his relationship with Kim Jong Un. Trump also revealed that Kim thought President Barack Obama was “an a- -hole.”

Kim reportedly wrote in one letter of “that moment of history when I firmly held Your Excellency’s hand at the beautiful and sacred location as the whole world watched with great interest and hope to relive the honor of that day.”

Trump went on to tell Woodward, “He never smiled before. I’m the only one he smiles with.”

The secret, the former real-estate mogul said, was that he approached Kim like a potential customer during three face-to-face meetings in a push towards nuclear disarmament in the Hermit Kingdom.

“It’s really like, you know, somebody that’s in love with a house and they just can’t sell it,” Trump told Woodward.

Trump went on to tell Woodward in regard to criticism of him giving up too much to Kim. “I met. Big f–king deal… It takes me two days. I met. I gave up nothing.”

Advertisement
Help President Trump STOP Joe Biden [ACT NOW]
Trump Unloads on Cuomo; ‘One of the WORST Governors’
Biden Doesn’t Respond to His Own Q&A. Nobody is Shocked.