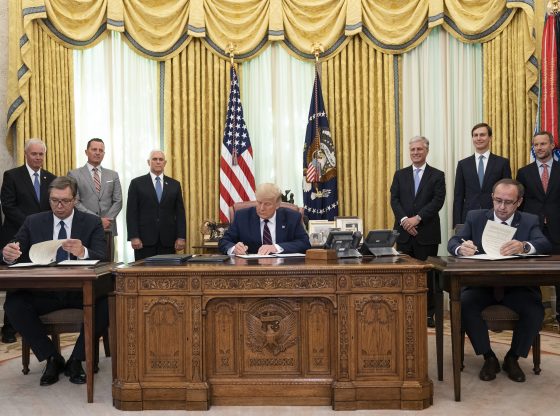 President Trump has been nominated for the Nobel Peace Prize for the second time this week.

I have nominated the US Gov. and the governments of Kosovo and Serbia for the Nobel Peace Prize for their joint work for peace and economic development, through the cooperation agreement signed in the White House. Trade and communications are important building blocks for peace. pic.twitter.com/XuhkLbHZAV

Earlier this week President Trump was nominated for the Nobel Peace Prize for his work in brokering the historic Middle East peace deal between the United Arab Emirates and Israel. That nomination came from Norwegian Parliament member Christian Tybring-Gjedde.

Trump is the man with the BIG PEACE PLANS!!!

Yes Democrat marxists…….can you all say in unison ORANGE MAN GOOD! Come on man….you can do it…… if you try!
On a serious note….how wonderful is this news! DJT has been underestimated in America by all except his supporters! We appreciate the recognition and honor our President is getting for his and the administration’s hard work and am sorry it will not be acknowledged by the MSM or the Democrats, unless they mention it with disdain.

he ain’t ORANGE he’s white like you is mr.whiteypiece of hyena BULLSHIT

Chill your roll, that was sarcasm that maxibaby was dishing out for all the never-Trumpers.

You have been flagged for the racist you are. Get off here and get back in momma’s basement and play

YOU deserve this nomination. Congratulations on your good work!

THINK THAT IS WAY OVERDUE. HOWEVER, AFTER RECENT UNDESERVED AWARDS GIVEN OUT, THE ‘NOBEL PRIZE’ IS TARNISHED AND LOST IT’S….’ PRESTIGE ‘ and ‘HIGH HONORS’ !!

Kathe Gilbert
Reply to  FED UP

That may be so, but with President’s Trump nomination(s) perhaps the Novel Peace Prize will bring back/ restore some honor and some credence it once had. The Committee on the Nobel Pease Prize must truly not compromise itself as they did with naming Obama, that was strictly Political, unworthy as Obama has not done anything to deserve it which we know only too well.

Particularly for giving it to Barry Hussein for being black, and to Greta Thunberg for being a teenage dropout. If Pres. Trump is awarded the Nobel, the idjit liberals will go berserk. I can’t wait!!

mondo cane
Reply to  FED UP

Only the Nobel Prize given to Obama, which the Swedish now say was a big mistake.

President Trump deserves this award! He actually earned it unlike thst POS Obama!

Better watch out folks, the President might just solve the mid-east conflagration — unfortunately, Biden will probably claim he was the one who did it (from the basement). Of course the President should be awarded the Nobel Peace Prize ! He should have already gotten it. He’s done more for peace in the last four years than anyone else, and FAR MORE than Obama even contemplated in eight years.

God bless President Trump and all those that worked toward making this happen.
May there be peace in this area of the world for many, many years to come.
Congratulations President Trump.

I guess this throws a wrench in the Dems claim that we have lost face internationally and the world hates us.

I couldn’t laugh enough at you libtards.

Sorry but the Nobel peace prize has lost it’s specialness. Obama got one for doing nothing. Sort of cheapened it.

My favorite president of all time must be a knowledge for his dedication to the American people and for peace throughout the world. The Demonicrats on the other hand focus on hatred, lies, deception and chronic bad behavior.

fantastic news for President Trump and all of us who have voted for him and supported him the past four years. Incredibly, he has won two (2) nobel peace prizes this year.

His brilliant ability to make great deals for all parties involved make Donald J Trump the most outstanding president our nation has ever had.

Never has this been done before. The Democrats and other negative nabobs in the Republican party can eat his dust and consider themselves well served despite their constant complaining and lack of respect.

This couldn’t have happened at a better time. And just when the Democrats were ready to cause election trouble for him. Now they will look like the petty fools they really are.

He deserves it. Bozo did not.

The Nobel Peace Prize is counter productive. Larger nations need wars to keep their economy sound. War serves many purposes: They reduce over population allowing employers to pay higher wages as employees become scarce. The manufacturing sector needs products in support of the war effort. Someone also has to manage the war; providing more white collar jobs. During wars structures get destroyed, thus creating more jobs to rebuild. This also applies to natural disasters. Without jobs, societies collapse. JOBS, JOBS, JOBS, JOBS has always been the major factor of any society. What does peace provide? A peaceful society maybe, but how many jobs does peace provide? If a nation wants a booming economy it must either create a war or become allies in a war. When or lose a war, the nation creates a WIN WIN result. The US economy boomed after World War I, World War II, and even after the Vietnam Conflict. Jobs that were once held by the dead soldiers had to be filled. The history of mankind was created ,not by peace, but by military conflicts. Our Old and New Testaments of the Bible have many examples of conflicts. Even the Islamic Koran. I consider myself a Realist. Religious Dogma. conflicting ideologies, and pure EVIL will never allow for Peace PERIOD. For all have sinned and fall short of the glory of God. My God gave me Free Will, thus I can be Evil or Good. The conflict between Good and Evil will never end.