U.S. Ambassador to China Stepping Down to Help Trump Campaign

U.S. Ambassador to China Stepping Down to Help Trump Campaign 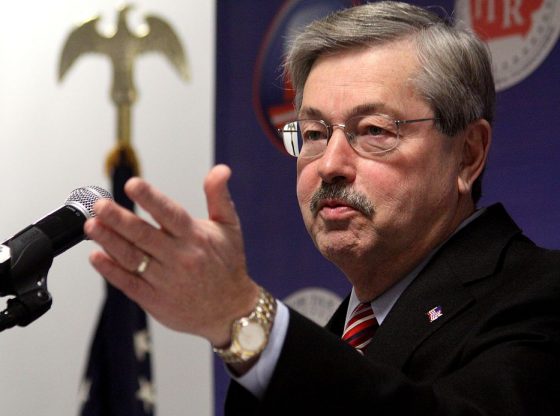 The United States Ambassador to China Terry Branstad is stepping down.

The reason? To campaign for President Trump and help him win in 2020.

The U.S. Embassy in China announced his departure on Monday. Branstad, who will step down in late October, has been praised for his work on the “rebalancing” of the U.S.-China relationship.

“I am proudest of our work in getting the Phase One trade deal and delivering tangible results for our communities back home,” Branstad, 73, said in a statement. “Our goal remains meaningful, measurable results for American families. We have made significant progress and we will not stop pressing for more.”

Branstad, the former governor of Iowa, received praise from Secretary of State Mike Pompeo — who appeared to share his thoughts on Branstad’s departure on social media before the news was announced.

“Ambassador Branstad has contributed to rebalancing U.S.-China relations so that it is results-oriented, reciprocal, and fair,” Pompeo wrote on Twitter. “This will have lasting, positive effects on U.S. foreign policy in the Asia-Pacific for decades to come.”

I thank Ambassador Terry Branstad for his more than three years of service to the American people as U.S. Ambassador to the People’s Republic of China.

Ambassador Branstad has contributed to rebalancing U.S.-China relations so that it is results-oriented, reciprocal, and fair. This will have lasting, positive effects on U.S. foreign policy in the Asia-Pacific for decades to come.

President Trump has revealed previously that Branstad would contribute to the last leg of the campaign when he stated: “Eric’s father is coming home from China because he wants to campaign,” during a call with Iowa Senator Joni Ernst which was subsequently posted to social media.

.@realDonaldTrump just called to tell me about his recent decision on Ethanol! And I was able to share the good news with some of our hard working campaign volunteers. pic.twitter.com/lUWWSZG2z4

So what’s the story? and the big deal?

Fed Up WIth Liberal Activist "Judges"
Reply to  Joe F

What do you mean, so what’s the story? Branstad is coming home from China to help with Trump’s campaign. He’s done a good service to America in helping with the Chinese trade deals. That’s the big deal. Trump/Pence 2020

Excellent move, United States Ambassador to China Terry Branstad has always been a strong American. This can only help keep our POTUS in office.

U r so right,,,and wow,,,I just love hearing about these kinds of stories…It just feels so good…

He most likely knows a lot about the nefarious activities of the Biden Family and their personal wealth-building schemes in China …and beyond !

I’d say that’s true. Of course we already know a lot about the nefarious dealings Quid Pro Joe has with China and many other countries~~ but the communist media won’t talk about that.

Politicians and hypocrisy, your point please?!?

Because he works for TRUMP!

At least he’s not a seditionist.