GOP Megadonor to Back Trump with Millions of Dollars

Home /Campaign 2020, Media, NEWS/GOP Megadonor to Back Trump with Millions of Dollars

GOP Megadonor to Back Trump with Millions of Dollars 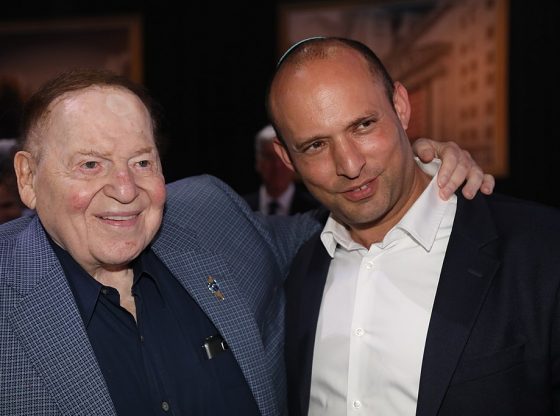 Businessman and GOP megadonor Sheldon Adelson is coming to President Trump’s aid in a big way this fall.

The CEO of Las Vegas Sands, which owns 11 casino properties across the globe, is coordinating with GOP operatives on how to best help Trump get re-elected, according to CNBC.

Adelson will spend somewhere between $20 and $50 million to ensure President Trump defeats Joe Biden in November.

It’s expected that a large chunk of the money will go to Preserve America PAC which is run by longtime GOP Operative Chris LaCivita.

The new spending by Adelson could lead to him outpacing his financial support for Trump in 2016 (CNBC):

Adelson’s potential spending spree could end up surpassing the amount he put up during the 2016 presidential election. Data from the nonpartisan Center for Responsive Politics shows that he and his wife combined to contribute over $82 million to mostly Republican causes that cycle. They were ranked second that cycle behind Democratic donor Tom Steyer and his wife, Kathryn, who gave $91 million to Democrats.

The Adelsons have given just over $27 million this cycle, CRP data shows.

Adelson’s involvement comes at a crucial time for President Trump’s reelection. In August, Biden’s campaign and the Democratic National Committee outraised Trump and the Republican National Committee by a whopping $154 million. Biden and the DNC combined for $365 million while Trump and the RNC combined for $210 million (Politico) which might wipe out Trump’s previous cash advantage (Politico):

Neither campaign has yet released their cash-on-hand totals, but last month’s fundraising disparity means Biden may have closed Trump’s once-formidable cash advantage.

That dwindling cash edge has alarmed Republicans, as the Trump campaign comes under new scrutiny for how it has spent the hundreds of millions of dollars it raised from 2017 until now.

Money isn’t the only factor that will influence the outcome in November, but it sure is helpful for campaigns and aligned PACs to fully fund ad production and placement, get out the vote efforts, and the people that make these crucial campaign activities possible.

Adelson knows where to place his chips. MAGA

Every bit helps, doesn’t matter the amount, and its greatly appreciated.

I know where I’ll be lodging and gambling next time in Vegas!

Something to offset Bloomberg

DID SOROS GIVE HIS OK.

Yes as most of Trump’s donations have been small $20 donors vs Biden’ wealthy ones.

Thank you for this most generous cash influx. It is much needed to combat the big headed hollywood dems. I always wish I could give more, but being retired & on a fixed income it is difficult. KAG 2020

I am curious about why money is so important in any political race? Sure I know money will buy ads and printed material but why is the money so important? To me it seems people are trying to buy the race a candidate os pursung! I mean the money will not be paying a person’s salary so what exactly is so important about raising money?? It has been dsaid Pelosiis a gret fundraiser, a raiser for what? And the dems are pouiring money, big money from Soros and Steyer into Biden’s campaign. Do they really think all that money will buy the preswidency? I am really confused. Itis illegal to buy betes so what does all that money really buy?

P.S/ I am a Trump supporter and donate but why am I donating and for what? I don’t expect any favors or anything like that. Just want to knmow where and what money is used for and why all the requests for more money! Mpney is the root of all evi8l. Just like the dems are so evil!

Advertising, Plain and Simple. Have you not seen all the Biden commercials out right now and how few Trump has put out. Biden is flooding the whole of America and Trump is concentrating on the Battleground States just like he did in 2016. With more money he can do better than Biden in advertising. He could flood all the USofA just like Biden and his Mega Donors. Now with Adelson’s money he may just be able to do that.

No, money is NOT the root of all evil. It’s the want of money that is the root of evil. Some people will go to extreme lengths to obtain money. Others won’t.

You are donating to a good cause — to keep our great president in office. The ability of all of us to earn money is the free market working. A free marketplace where anyone can earn money if one is willing to work for it is the greatest thing about capitalism. It’s the reason why America is the richest country in the world.

Of course the Democrats are evil. But it has little to do with money.

The money is important in every political race because, as you wrote, money will buy media (ads) and big media is very very expensive. Why is it expensive? Because it reaches so many people — TV, radio, newspapers, magazines, billboards, digital online advertising.

Of course it’s illegal to buy votes. We don’t live in a banana republic.

Yes, it does pay salaries for campaign workers and supplies they need, office spaces, vehicles and more. Why do you think it doesn’t pay for these things?

Perhaps your cynicism is getting the better part of your judgement.

Libs respond to negative ads….BUT Hillary spent double what Trump did to lose.

Adelson knows Capitalism is his bread and butter. Like any business for profit, gambling is big business. Any person who backs Capitalism, knows what drives the nation. What will happen under Socialism? If the Soccialist nation devises some form of wages, these wages will be passed around to those who do not work. If the national wage was $60,000 annually and a person can earn more, this extra income will be given to those who do not works. Is this right, giving part of your wages to support people who play the system? Where is the incentive to work at all if everyone gets paid the same. What wage will the Political Elite earn? The same, but with a twist. They will get all the perks that come with doing the government’s work. If they need a mansion to influence other nation’s diplomats, then they get a mansion. Where they sit in government will determine their perks. Doesn’t this sounds like a Dictatorship, a Kingdom, or how Communism works. Does the leadership of Iran, North Korea, China, and Russian go without perks? In all these principalities if the citizens do not like what they get, they become the enemy of the State. England is considered a Free Government, however the Queen (or King) still gets perks they did not earn. In England every wage earner pays over 60% of their wages to support all the free stuff the citizens get. Would Americans be happy paying such a high tax? The US and all it’s territories pay their taxes to support government activities legislated by by representatives within the government. These representatives are elected by the people. If these representatives do not do the work of of the people, they are voted out of office. Giving the people a voice in government is rare around the globe.

Good for Mr. Adelson! Backing the right horse now will pay dividends in the future. He’s not a multi-millionaire for nothing.

Did anyone stop to think that Biden is raising more than Trump because all his Donors are the Elite Left Millionaires and Trump’s donors are just us plain little Americans. I think we have a lot more support for Trump than the Few Mega Donors who are all Billion and Millionaires for Biden. Grassroot support will win the day. 2 multimillionaire votes do not beat out a 100 Grassroot votes no matter how much money they spend.

Thank you Sheldon Adelson for helping to get the greatest President in my life time re-elected. KAG

FINALLY….Someone has there Thinking Cap on JUST RIGHT…..I do agree with Grace that this is money well spent.If Our President doesn’t get another 4 years this country will forever be changed to something that the people that voted for the IDIOT will be the first to say OH MY GOD WHAT A MISTAKE WE MADE….Wake up America TRUMP/PENCE 2020 or we are all DOOMED and will be under the Harris Administration….Take a Moment and just think about that folks.

No doubt the democrats will try to make political hay out of this, conveniently ignoring fellows by the name of Bloomberg, Soros, Schultz…