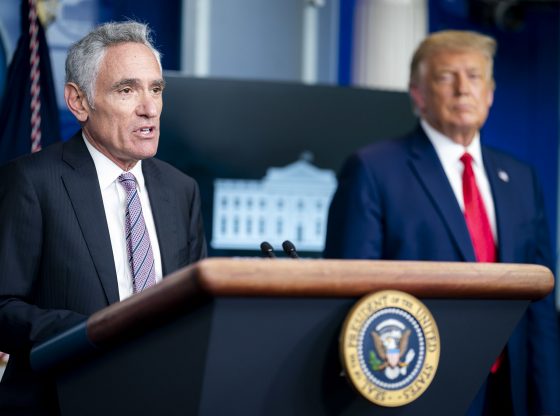 Dr. Scott Atlas announced his resignation as special adviser to President Trump’s Coronavirus Task Force after serving on the Special Government Employee team. In his resignation letter, Atlas writes that his recommendations always stemmed from the primary focus of protecting the working class and minimizing damage from the pandemic and praises the administration’s efforts to reopen schools.

Honored to have served @realDonaldTrump and the American people during these difficult times. pic.twitter.com/xT1hRoYBMh

In a report from The Daily Wire:

“I am writing to resign from my position as Special Advisor to the President of the United States. I thank you for the honor and privilege to serve on behalf of the American people since August, during these difficult months for our nation,” Atlas wrote. “I worked hard with a singular focus – to save lives and help Americans through this pandemic. As you know, I always relied on the latest science and evidence, without any political consideration or influence. As time went on, like all scientists and health policy scholars, I learned new information and synthesized the latest data from around the world, all in an effort to provide you with the best information to serve the greater public good.”

“These views were in agreement with those of many of the world’s top epidemiologists and medical scientists from Harvard, Oxford, and other top academic institutions, as well as with those of thousands of medical and public health scientists from around the world,” Atlas continued. “Although some may disagree with those recommendations, it is the free exchange of ideas that lead to scientific truths, which are the very foundation of any civilized society. Indeed, I cannot think of a time where safeguarding science and the scientific debate is more urgent.”

“We also identified and illuminated early on the harms of prolonged lockdowns, including that they create massive physical health losses and psychological distress, destroy families, and damage our children,” he continued. “And more and more, the relatively low risk to children of serious harms from the infection, the less frequent spread from children, the presence of immunologic protection beyond that shown by antibody testing, and the severe harms from closing schools and society are all being acknowledged.”

“Mr. President, your Operation Warp Speed team delivered on our promised timelines for new drugs and vaccines. I congratulate you for your vision, and also congratulate the many who did the exemplary work – we know who they are, even though their names are not those familiar to the public,” he concluded. “I sincerely wish the new team all the best as they guide the nation through these trying, polarized times. With the emerging treatments and vaccines, I remain highly optimistic that America will thrive once again and overcome the adversity of the pandemic and all that it has entailed.”

Dr. Atlas’s resignation comes before his role was set to expire at the end of the week. President Trump was first attracted to Dr. Atlas’s “economy first” views which sparked criticism from some health experts.

Dr Atlas was the anti Rasputin, aka Fauci, and he made a lot more sense. Job well done, we can’t say the same for Fauci who fostered fear and loathing among a lot of folks!

Dr. Atlas was the sane voice on the task force, he had no political agenda and for that he will be missed. He stepped on the toes of Fauci because he knew Fauci had a political agenda, it is called BIG PHARMA. Fauci started off without an agenda. He spoke the truth and somewhere the Lobbyist got involved and you know it became about an agenda not the people.

Jesuit Co-adjutor Fauci worked with Jihadist Obama starting in 2013 to create the bio-weapon with the Chinese Communist Party military and with $3.7 million helped finance the weapon to push the World Economic Forum agenda with Eugenist mass murderer Bill Gates as an act of treason that must be punished publicly executed according to law. NOTHING short of Execution for treason will work Mr.Trump.

An investigation into SEC filings has revealed that the firm which owns Dominion Voting Systems received $400 million dollars from a Swiss bank with close links to the Chinese government less than a month before the election.

Will the GOP get their act together to support the Republic? See whose seats in Congress are to be open for Patriots: https://aim4truth.org/2020/12/01/cat-report-621/

That Pelosi and Feinstein have ties to Dominion should tell you that there was rigging in this election if nothing else. I’ve been an Election Judge since 2011. My first time being for Obama’s 2nd run. Several of the voters told me that the touchscreen was changing their votes even back then. Those were the ones who noticed, how many DIDN’T before hitting the send button?? Also, a black woman brought in a group of SEVERELY mentally handicapped white men in to vote and proceeded to do their voting in their place. Obama probably didn’t win legitimately either!!! I don’t know how long they keep the Election results, but if possible, they should check Obama’s while they are at it. God help us, and bless the US and President Trump and his family and associates!

It is Fauci not Atlas who needs to be tendering their resignation. We need reasonable nonpartisan people who rely on the true science not political agenda to deal with the Wuhan Virus.

Absolutely, Dr. Atlas is and was a straight shooter with the science,
and his knowledge was off the charts!

Can we get a REAL Doctor who will call out this for what it IS………A COMPLETE FRAUD! It’s a PLANNEDemic! NOT a ‘pandemic’. A PLANNEDemic out of the SEASONAL FLU!!!

I believe many Doctors believe this. These Doctors have treated thousands of covid patients with hydroxychloroqine with excellent results saving thousands of lives.
It became so political, they were ridiculed and canceled by the main stream media and the press: they just went about their lives treating their patients, keeping them out of the hospital and seeing complete
recoveries.
Seems almost criminal to me!

Low risk to anyone 50 and younger. If you have asthma or COPD then high risk. If you have health risks, then high risks. But shutting down the country again and using Becton Dickinson for your Covid tests is unconscionable. Becton Dickinson puts out false positives all the time. You could have a normal mild cold and it will read Coronavirus positive. Covid-19 isn’t what these test kits are reading folks. It’s the biggest scam in Global history.

The negative emails and media attacks on Dr. Atlas may have had a large role in his resignation. I for one will miss him for his trying to integrate the damage from Covid on the entire population.

I agree and that is a loss to the American People.

We have lost another good and honest man. Biden will likely give the job to Hunter–doesn’t know shit about medicine but really knows all about drugs.

You don’t REALLY think Biden would keep Dr Atlas around, do you?

Biden could not have run election fraud without the Fauci / Obama Virus hoax.

SADDENED to hear of Dr. Atlas departure. In my opinion. Dr. Atlas was 100 % on target with China-Virus assessments and Predictions. UNLIKE Dr. FAKE-FAUCI who couldn’t find his way out of a wet paper bag!! Fauci changes his mind as often as one changes a babies Diapers. UNBELIEVEABLE, THE STUPITY OF SO MANY IN CHARGE !!!!

joAnn Larkin
Reply to  FED UP

A BIG THANK YOU to Dr. Atlas for his contribution and service to the
American People.

President Trump was ALSO absolutely correct to NOT foster PANIC from the outset of the current pandemic! Dr. Atlas has been the voice of EDUCATED REASON with no political agenda to warp his decisions and words! His steady and reliable voice will be sorely missed!

We will miss his sound advice. If Biden takes over he is now available for service. Now on to another subject. All those $$$ BILLIONAIRES $$$ owe God and all of us a sincere apology for being biased and attacking Trump, Conservatives, and Christian causes. They need to REPENT. They are just one breath away from becoming paupers facing the second death. If they don’t humble themselves now and seek forgiveness and mercy from Christ they will die and join their true master Satan in the Lake of Fire. This pandemic was caused by our enemy China. Satan has been in control of them for a long time. Now he is working feverishly to make America like them. The news media has become the BEAST, the Mouth Piece of Satan. Save yourselves before it is too late!