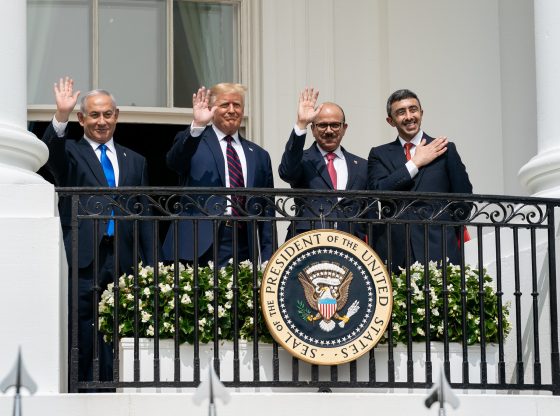 President Trump has announced another historic Middle East peace deal involving Israel. This time the deal is between Israel and Morocco.

President Donald Trump announced Thursday that his administration helped secure a fourth peace deal between Israel and an Arab nation.

“Morocco is the fourth Arab country to move toward normalization with Israel in the last four months as part of the Trump administration’s ‘Abraham Accords’ initiative,” Axios reported. “The Moroccan decision comes as part of a deal that includes U.S. recognition of the disputed territory of Western Sahara as part of Morocco.”

Another HISTORIC breakthrough today! Our two GREAT friends Israel and the Kingdom of Morocco have agreed to full diplomatic relations – a massive breakthrough for peace in the Middle East!

Morocco recognized the United States in 1777.  It is thus fitting we recognize their sovereignty over the Western Sahara.

“By virtue of the authority vested in me by the Constitution and the laws of the United States, do hereby proclaim that, the United States recognizes that the entire Western Sahara territory is part of the Kingdom of Morocco,” the proclamation continues.

This is just another foreign policy win in a long like of wins Trump has experienced as President.

Biden and Susan Rice will end of this

Nope, Mr. Trump will still be President when the dust settles. Don’t lose the faith!

Rudolf Hess – Go Away. You add nothing with your constant inane comments.

Depends on the NINE have they a spine? We shall soon know!

It is inconceivable that it can turn out otherwise yet virtually every media outlet labels any and all allegations of fraud as false, disproven, or unsupported. Have these allegations even been seriously investigated?

They will give the Palestinians their country back?

There is and never has been a country of “Palestine”. The land given to Israel by God as described in the old testament is still belongs to Israel. If you don’t agree, your argument is with God Himself. Let me know how that goes for you.

Please do make us laugh?

What country are you talking about? There is no country of Palestine to give back.

Not if we end the Biden administration, first.

And he’s everywhere! I’ve never seen anyone who can jump all over the US in one or two days like our President does. He’s the best!

Close your mouth and stop defecating out of it. At least keep a roll of toilet paper handy so you can wipe off the brown stains dripping out of the corners of your lips. Yuck!

Just goes to show what a great president DJT has been for the last 4 years, of him, trying to put out fires and war that obummer, got us into, for 8 failed years of leaving the middle east burning, for Trump to fix, he did better than fix, and now we have the same idiots coming back, to destroy everything again.PATHETIC DEMENTIA JOE

I heard he has “Bacheria,” so we have to forgive him.

And Godfather Joe Bi-dung wants to go back to the failed situation that he and The Obamanation pushed. Ugh!

Beijing Biden is worse than Barry Hussein. Quid Pro Joe doesn’t have a clue what he’s saying or to whom he is saying it. He’s a pawn of the DNC commies that are in bed with Xi.

i spell it ByeDun-g , but every one seems to realize what waste of space he is ,40 years bludging of us taxpayer . was thinking .. a lot of officers and officials seem to die in wars ,it can be hard sometimes to tell who killed who !. could be the same in antifa rioting ,the ring leaders must stand out a bit against the flames .. just saying .

Just “Bidumb,” if you please.

You should know Albert, your spelling and thinking is highly suspect. Spell, smell. Got it? Now wiggle your nose and purse your lips. Now wipe thoroughly.

Mark is so clever.
6th grade clever.
Even Trump clever.

Obama has the stock market the highest it have ever been.

When will Trump have all the Palestinians killed?
The Israelis are just not doing it fast enough.
There will no peace in the Middle East until every last Palestinian is dead.
They gassed 6 million Jews.

There were no Palestinians when Hitler gassed the Jews.
Your goal may be death and destruction BUT our President’s goal is PEACE.

Whats the Palestinian death count up to right now.

It is really sad peoples eyes are closed to how much better America is with President Trump.

Our old enemy, Satan, has blinded the eyes of those who are content to let the commies take over. But I’ve read the end of The Book`~ we win!

True…not an easy road there, though.

God loves all of mankind.
Commies too.

God loves them so much He will give them what they deserve. Meanwhile, Christians will be in the true utopia with Jesus Himself!

God loves all of mankind, even commies.

Better for America or just better for Israel?

Better for both, and the whole world too!

It is really sad that Trump can not effectively communicate that.
Do you think that people are turned off by his foul mouth?
I am!

And THE MAN just keeps working. Love our President Trump.

He will enter into his retirement on Jan.20.

Trump will still be president of the u.s.a. and he wil.l also make sure that nothing like this ever happens again.Col.Hickey

What will you be doing on Jan. 20 as Biden is being sworn in?
Running in the streets with your Ar-15 looking like an old fool?

Celebrating President Trump’s hard fought victory over the deep state as he begins his second term.

We should use the next four years to blast everything Biden and his swamp people does and says. Voice the things Trump did and the Biden lies he was the one who really did this. Skewer him for every little misstep and bungle, attack him when he stumbles in speaking, and point out the disasters created with the swamp people he chose. They spent 4 years on impeachment, false Russia accusations, and ridiculing all of his great accomplishments, foreign and domestic, including the lifesaving fast track vaccine development. No quarter for them and no falling in line with his failures regardless how the media tries to prop up this senile puppet. It’s our turn now, not to fall in line but to expose him and them for what they are.

You are absolutely right.
We must continue to discredit Biden to the American people and world.
Make America look so ugly that no one will do any business with us.
America First.
And Only.

This is fantastic. He is bringing peace to some very volatile parts of our world. And sad thing is, he will never get credit he deserves for doing so. No other president either tried or even tried to get this done.

Though, don’t be surprised if Biden tries to undo the peace treat. Members of our congress hate Israel and Biden, the weakie, will give into them.

There you have it, when trump oozes out of the WH, he can always move Morocco and live happily ever after

Not to worry….. If sleep and the Ho get in office they will screw the whole WORLD UP!!!

God is in charge and this is following his plan as the Isreali and Palestinian treaty gets closer.

Donald Trump is the greatest President in my lifetime – and I’m old!

Another big win Mr. President. Kudos to you. It’s too bad some people can’t accept the fact that America is greater under your Presidency than it will ever be under Biden.

President Trump puts all the other Recent Past Presidents to shame. If the Media was even a little fair and unbiased he would be celebrated as the second coming with parade in his name and a statue and a national holiday in his name by the media and both party’s. Non of the past Presidents can hold a candle to him. And everyone knows it But many won’t admit it

Hush! The mainstream news media may hear about it and forbid everyone to print or speak about it. Hate speech you know. The BEAST controls what you hear or see. Now shut up slaves and send in your guns. It will save lives when we come calling for them. We come in peace. Yuck! Yuck!

Media runs and hide. Buried their heads inn the sand. This is too much. He is all the time doing great things. They can’t keep hiding them from the public. Oh what will they do?

This will all fall apart if Biden occupies the oval office.