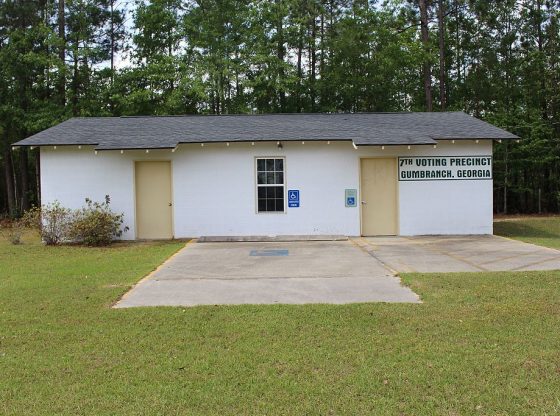 Imagine that it’s November 3, and Democrat election observers arrive at a vote-counting center in Pensacola in Florida’s First Congressional District — home of conservative Republican stalwart Congressman Matt Gaetz and the heart of Trump Country. These Democrats are eager to assure that ballots are tabulated fairly and not to the disadvantage of their nominee, Joe Biden. They proceed with confidence, knowing that their ability to note and challenge anything that looks unusual or even illegal is central to keeping clean the elections through which Americans choose our leaders.

Thus, these Democrat observers are stunned when Republican election officials bar them from entering the tabulation room. Those few Democrat overseers who wriggle inside are kept too far from the vote-counting tables to see what’s happening. Some ballots seem to be getting wheeled in suitcases into another room, from which Democrats are kept out by brusque, dismissive GOP authorities. Some Democrats are downright shocked when pro-Trump election workers scream at them, hurl racial epithets their way, and physically get in their faces in hopes that they will get frustrated and scram.

Now, can you picture these overwhelmed Democrats shrugging their shoulders and simply going away, perhaps to contact friendly journalists, post their experiences on social media, or grind their molars at home, in brooding silence?

I can’t picture that, either.

Instead, these Democrats would yell at the tops of their lungs, roll on the floor if anyone attempted to remove them bodily, and call in reinforcements to surround the building and demand: “No clean count, no peace.”

And God bless those Democrats for acting this way, if they had to, which they didn’t. Democrats in Republican areas did their jobs unmolested. If they were impeded in any way, they would have said something, and Hate Trump, Inc. would have told their stories — good and hard.

Georgia’s U.S. Senate runoff elections approach rapidly, with January 5 just a week away. Infernal early voting is in full swing. And absentee and mail-in ballots already are chewing through the system, waiting to do their corrosive worst, like plaque on ground molars. Republicans worry that January 5 will be an instant replay of November 3, when everything went to hell.

“The November 3, 2020 election was chaotic and the results cannot be trusted,” according to the December 17 Chairman’s Report of the Election Law Study Subcommittee of Georgia’s State Senate. This highly disturbing, 15-page, single-spaced document details 13 different categories of vote fraud, irregularities, and abuses.

As the report explains, at a December 3 State Senate hearing, “Witnesses testified to hostility to Republican poll workers during the recount…doors were locked, and Republican poll watchers were sent home early or given menial assignments.” Also, throughout the state, election monitors “were often kept at an unreasonably long distance” and “blocked from having the visual ability to see what was written on the ballots or to have any meaningful way to check the counting or to double-check that what was counted was actually assigned to the right candidate.”

“The Secretary of State’s Office,” the report concludes, “has turned a blind eye to fraud to the point that it ought to be considered gross negligence.”

Republican Governor Brian Kemp’s flaccid non-response to these and myriad other outrages at the Peach State’s polls makes low-energy Jeb Bush look like President Donald J. Trump on coke. Kemp has maintained an eerie near-silence throughout this slow-motion assassination of democracy. He also studiously refuses to call a special session of the GOP-controlled state legislature to unplug some of the most noxious machines in Georgia’s fraud factory: Few, if any, signature checks on absentee ballots, observers booted from vote-counting rooms, unsupervised ballot drop boxes on unguarded sidewalks, obsolete registration records that invited 10,315 dead people to vote, permitted 66,247 voters under 18 years of age, enabled 305,701 voters who requested absentee ballots before or after the relevant statutory deadlines, and much more. These 382,263 illegal votes alone equal 3,245 percent of Biden’s 11,779-vote margin of “victory.”

Before Democrats stage a re-run of this electoral horror show, Republicans should respond with something simple: Turn every election observer and challenger into a potential whistleblower — literally. Georgia’s Republican Party, conservative activists, or both immediately should give these GOP challengers high-decibel whistles on lanyards. Every challenger should wear one around his neck while on duty.

If election workers deny them meaningful access to tabulation rooms, counting tables, or actively harass, intimidate, obstruct, or abuse them, then these GOP observers should grab their whistles and blow as hard and as loudly as their conservative lungs will handle. They should keep blowing and blowing until people whip out their cell-phone cameras to record whatever injustice is afoot. Boisterous whistles will attract professional news cameras. Conservative foot-soldiers nearby will hear this alert and run to the rescue.

Whatever evil these Left-wing fraudmongers had in mind would be captured on the record. And, as nearly always befalls bullies when people stand up to them, they will stand down.

The best thing about these whistles is that, like atomic weapons, they can work their magic without even being used. The doctrine of deterrence would apply here. Crooked election workers and others who perpetrated fraud on November 3 fear scrutiny. So, the mere presence of these whistles would deter most of them from perpetrating on January 5 the kinds of anti-GOP heavy-handedness that helped vote thieves steal Michigan, Nevada, Pennsylvania, Wisconsin, and the great state of Georgia on Joe Biden’s behalf.

And if whistles fail to do the trick, GOP observers should mimic 1980s AIDS activists and ACT UP. They should fall to the ground and scream as blood curdlingly as possible, until the Leftist thugs back the hell away.

The phone numbers of GOP lawyers should be on speed dial, to rush in and work their wonders.

And about 2,000 tough young people from Turning Point USA and similar groups should be on hand to show up at moment’s notice, with signs, flags, and bullhorns, etc. and holler, “BLOODY MURDER!” as ear-piercingly as possible.

Republicans and conservatives are too nice, too polite, and too quiet. Leftists scream. Rightists stage seminars.

November 3 was a Left-wing rape too far. The Right must be ready for January 5. And rape whistles should be the least of it.

I agree. Give them back everything they have been feeding us and telling us to like it. Give it back to them just the way they have done to us only do it harder, longer and louder! If they ask “why” just tell them that they taught us well!

Louder, uglier, longer, etc…
conservatives, Republicans deemed too polite, nice?????
then they just missed the real patriot by design
no labels here
true grits and glory that has yet to rear its head
thank you

Sounds like a plan. I thoroughly trust Charlie Kirk, who is a stellar young man.

I worry that Georgia is using the same Dominion machines or any of the other machines to vote and count the votes; machines which have proven to be defective, corruptable, preprogramed to the socialists with leftist algorithms, whatever you call it, even with election monitors assigned. Cheating and fraud I call it. It wouldn’t surprise me that the end result will be the Dems in full control of our government through their cheating and the wimpy legal system and Republicans in congress won’t hold anyone accountable. Maybe the national guard or military should monitor voting and ballot counting, hovering over everybody with hiden cameras overlooking it all.

No need to worry it has already been reported that they are using the same machines as in the general election. No help then from the highest court in the land and they turned their backs on it. Same song second verse. .Afraid to make the dumercrats mad. No limit to what they will do . I repeat no limit. Impossible for anyone to defeat such organized dumercrats. Hummm. Who is the greatest organizer ever? RRRRight. Look beyond the trees to see the forest.

Why haven’t the election workers in philly, pittsburg, atlanta and the other democRAT cities that stole the election been doxed? They do it to our side all the time. I would like to know their names and addresses and I am positive a lot of other people would too. They need to be a least harassed by some of the 74+ million of us whose vote they stole on social media or better yet in person. They are treasonous scum who need to be at the very least ostracized. If any patriot knows who they are please start posting that information. No more being nice guys.

MURDOCK: A Guide to Evidence of Vote Fraud in the 2020 Presidential Election - Trump Train News

MURDOCK: A Guide to Evidence of Vote Fraud in the 2020 Presidential Election - Deroy Murdock