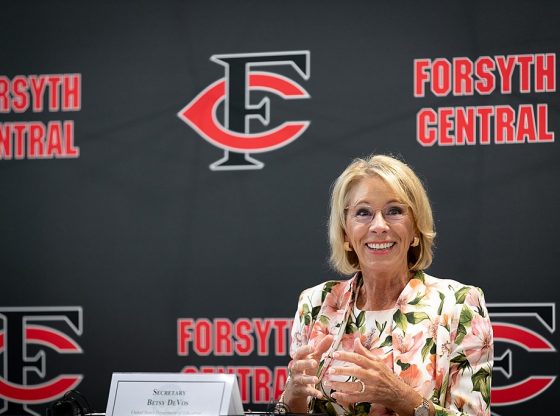 US Department of Education, CC BY 2.0
| By: TTN Staff| Administration,NEWS | 1586 | 6 comments
Advertisement
Join 80 Percent Arms To Build Your Very Own High-Quality Firearm Today

Another Trump Cabinet member is calling it quits. The most recent to join the exodus from theWhite House is none other than Secretary of Education Betsy DeVos. In the resignation letter, DeVos cites the recent violence on Capitol Hill as part of why she chose to resign.

“We should be highlighting and celebrating your Administration’s many accomplishments on behalf of the American people,” DeVos wrote in her letter. “Instead, we are left to clean up the mess caused by violent protestors overrunning the U.S. Capitol in an attempt to undermine the people’s business. That behavior was unconscionable for our country. There is no mistaking the impact your rhetoric had on the situation, and it is the inflection point for me.”

“Impressionable children are watching all of this, and they are learning from us,” DeVos continued. “I believe we each have a moral obligation to exercise good judgement and model the behavior we hope they emulate. They must know from us that America is greater than what transpired yesterday. To that end, today I resign from my position, effective Friday, January 8, in support of the oath I took to our Constitution, our people, and our freedoms.”

DeVos’ letter highlighted the work that the administration did in expanding efforts to put “parents in charge of education” and lead the expansion of “school choice and education freedom in many states.”

“We have restored the proper federal role by returning power to states, communities, educators, and parents,” DeVos said in her resignation letter. “We have returned due process to our nation’s schools and defended the First Amendment rights of students and teachers. We have dramatically improved the way students interact with Federal Student Aid. We have lifted up students by restoring year-round Pell, expanding Second Chance Pell, delivering unprecedented opportunities for students at HBCU’s, and so much more.”

Trump had her back when every Education Leftist opposed her ! With Elites, there is no loyalty, no honor- and they (Dem & Repub alike) will sell out for personal benefit every time! It’s a joke- she was out of a job in 12 days anyway! Just another Mitt in a skirt!!

everyone is out for themselves, no loyalty she’s pathetic! Everyone disliked her and he did stay loyal! To above to see what a joke she is

Everyone that has come on Fox says we need to keep the Rhetoric down! Than they say something insightful, like Dr Tom Price!

The problem at the Capitol was not Trump supporters. The democrat’s have been denouncing everything that Trump has done so it’s no surprise that they would blame the capitol break in on him. President Trump did not send these idiots in to destroy property but the political enemy’s use any chance they can get to slander President Trump. We have watched for months the riots in the democratic cities committed by Antifa and BLM with no response by the democratic politicians. But this action not, created by President Trump, is now being blamed on him and they want him to resign before his legal term is up. As a supporter of this president I hope he releases all of the data that has been compiled by the FBI on Biden and his family and stays the course until the last day. Republicans need to learn how to back their president not turn on him when the opposition creates false accusation’s.