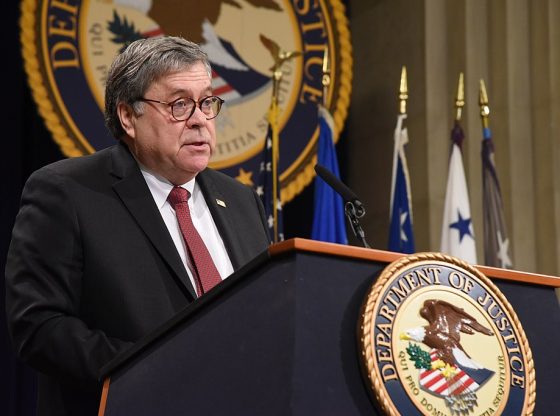 Former Attorney General William Barr reportedly warned President Trump that his legal team was lying to him regarding the election being stolen and also called many of the team’s theories “bullsh*t.” The brash remarks came from a Dec.1 meeting with Trump and other aides, according to Axios. The meeting was called because President Trump was frustrated that AG Barr made comments during an interview with the Associated Press which contradicted public claims from this legal team.

During the interview, Barr clarified that while federal investigators were looking into voter fraud allegations investigators had not found evidence widespread enough to overturn the election. When President Trump confronted Barr about the interview he then warned the president about his legal team.

These things aren’t panning out,” Barr told the president, standing beside his chief of staff Will Levi. “The stuff that these people are filling your ear with just isn’t true.” Barr explained that if Trump wanted to contest the election results, the president’s internal campaign lawyers would have to do it.

The Justice Department, he continued, had looked at the major fraud allegations that Trump’s lawyers had leveled. “It’s just bullshit,” Barr told the president. [White House counsel Pat] Cipollone backed up Barr by saying the DOJ was investigating these claims.

“I’m a pretty informed legal observer and I can’t f***ing figure out what the theory is here,” Barr reportedly said in reference to the claims that Trump’s legal team were making. “It’s just scattershot. It’s all over the hill and gone.”

Barr, who was widely seen as the most consequential hire that Trump made during his presidency, was also a favorite among Trump’s base of supporters. He resigned three weeks after the AP interview. He has since strongly criticized Trump over the Capitol riot.

Trump’s legal team, especially Rudy Guiliani, has been heavily criticized over the past months for their continued claims that the election was stolen by widespread voter fraud.

Was Barr a deep stater since he and Bush 41 met when they were in the CIA? Is what he was saying true or is the swamp talking?

This is why he had to resign. Barr was blind to the evidence and to most everything else.

The election was a sham if for no other reason that the legislatures did not change the rules- the political administrations changed the rules to allow the fraud.

The fact that courts wouldn’t hear the evidence doesn’t mean it doesn’t exist.