Trump Revokes His Own Rule in Final Moments of Presidency

Home /Administration, NEWS/Trump Revokes His Own Rule in Final Moments of Presidency

Trump Revokes His Own Rule in Final Moments of Presidency 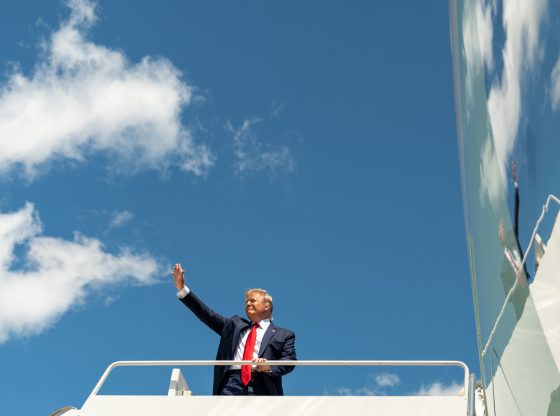 In his last hours as president, Trump revoked his own executive order which barred White House employees from lobbying the government for five years after they leave their positions. The Executive Order was issued last night by Trump as he wrapped the last of his official business within the White House.

President Trump first issued the Executive Order only eight days into this term on Jan. 28, 2017. The move was the first of many attempts to fulfill Trump’s campaign promise to “drain the swamp.”

The measure, known as “Ethics Commitments by Executive Branch Appointees,” barred political appointees from any lobbying related to their agency for five years and also imposed a lifetime ban on lobbying on behalf of a foreign government. Every Trump appointee was required to sign a pledge agreeing to the rules.

President-elect Joe Biden is reportedly planning to issue his own executive order addressing ethics standards at the White House shortly after he’s inaugurated on Wednesday.

His plan, first reported by The Washington Post, is to prohibit officials who leave the administration from lobbying the White House for Biden’s duration in office. Employees who leave toward the end of Biden’s tenure will be prohibited from lobbying the White House for at least two years. Another provision will prohibit incoming administration officials from accepting “golden parachute” payments from their former employers for taking a government job.

President Biden is expected to issue multiple Executive Orders within his first hours as president.

Im sorry but it seems I was played for a sucker. But I won’t be for 46. He will get no congratulations from me.

Don’t feel too bad, the DNC suckered millions. With MSM telling flat out lies and hiding the truth.

Despite all good intentions, the swamp stayed full ….
We are Amerika!!!! Lol lol

For now yes. I’ve been hearing rumblings about March 4h.

Can you explain ? If not I understand.

I don’t fully understand it myself Military Intelligence plays a cat and mouse game sometimes disinformation sometimes real and we have to differentiate the two. This is what I have NESARA (I hope that’s big enough to see, I had to enlarge it) comes on the 4th, but so do new elections. Something easy like ‘Bat-faced boy was found in Walmart parking lot.’ Would be great, we’d just ignore it.

Where will Trump supporters be smearing their feces on March 4th?

Well, where are you going to be?

NOT FUNNY! SAY GOODBYE TO FREEDOM.

Trump lied about draining the swamp.
And so many other things.
Like Obamacare….

Al your an asses behine

I’m calling 46 “bidet “ after the plumbing fixtures used in some countries to cleanse your self after using the restroom.😁

How can Biden issue an “Executive Order” on ethical standards WHEN HE DOESN’T HAVE ANY?

Excellent question! It’s like the thief who turned his friend in for STEALING!

Don’t know “who’s” running the White House, but it sure ain’t Joey B.He has ZERO “clue” what’s happening anywhere. He can’t hold a press conference since he can’t remember zip. When he begins to get “hostile”, that’s when “C’mon man”, comes out. SHORT FUSE & he holds the nuclear codes & the “RED HOTLINE”? God help us all.

Susan Rice is the shadow president just as Valerie Jarrett was for Onama.

Rosanne Barr was absolutely correct about Valerie Jarett looking like a cast member of the Planet of the Apes and so does Mad Maxine Waters ! What a pathetic pair !

yes, you are saying both women were president during Obama’s term.

And now those who voted for him are claiming they were not aware of all he and his son were involved in nor the pay for play etc etc, nice try but we don’t believe you. you wanted democrats to win and therefore they cheated to get there. you know it we know it

This country needs people who have morals and ethics. They are in short supply these days.

Bill A
Reply to  Daniel Zarsky

Zero supply in the democrat/socialist party1

Good for him. That’s another weapon he can use against the swamp.

Everyone sees that Joe Biden is not capable of being President. We see that has cognitive behavior etc. The Obama’s are behind this presidency and have been all along. Joe Biden is used as a scapegoat, very sad, we call this elder abuse. The Obama’s don’t care how degrading this is to the family, as long as they can benefit from it. Politics are pretty dirty, the Obama’s wanted to get back at Donald Trump since 2016 especially, expecting Clinton to win. Now they are bidding their time to put Kamala Harris as President.
KARMA will eventually get them……..
I, live in Toronto, Ontario, Canada and we see all this going on,

I found it sad that our country has stooped so low that the highest office in the land was given to a “going senile” old person. It was pathetic when he was signing one of his(?) EO’s and could not explain what the document was actually about. By-the-way I can make that statement because, I have already been at his age (several years ago) and he would be a much bigger liar if he says he has not been affected.