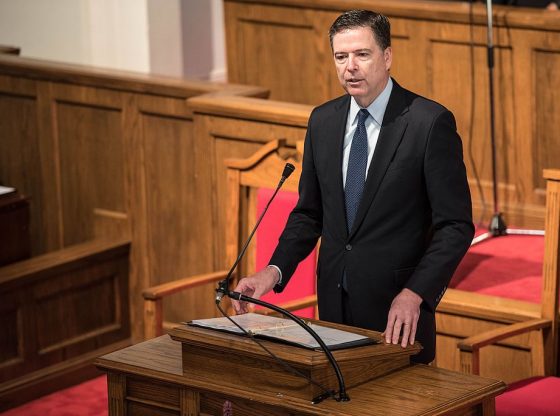 Newly-declassified documents show then-FBI Director James Comey purposefully lied about the Steele Dossier. He wrote an email to then-Director of National Intelligence James Clapper saying the dossier couldn’t be “sufficiently corroborate[d].” Despite the lack of corroboration, Comey still signed the FISA warrant that resulted in the surveillance of Carter Page.

just had a chance to review the proposed talking points on this for today. Perhaps it is a nit, but I worry that it may not be best to say “The IC has not made any judgment that the information in the document [dossier] is reliable.” I say that because we HAVE concluded that the source [redacted] is reliable and has a track record with us of reporting reliable information; we have some visibility into his source network, some of which we have determined to be subsources in a position to report on such thing; and much of what he reports in the current document is consistent with and corroborative of other reporting included in the body of the main IC report. That said, we are not able to sufficiently corroborate the reporting to include it in the body of the report.

That all rings in my ears as more complicated than “we have not made a judgement that the information in the document is reliable.” It might be better to say that “we have not been able to sufficiently corroborate the information to include it in the body of our Russia report but, for a variety of reasons, we thought it important to include it in our report to our senior-most audience.”

At this point in time, Operation Crossfire Hurricane – the FBI’s investigation into Trump campaign officials during the 2016 election and well after the Trump administration took hold in January 2017 – was already teetering. The CIA informed Comey and the FBI that Carter Page wasn’t a Russian spy. He was actually helping the CIA.

The Justice Department and FBI engaged in a “premeditated effort to dislodge the duly elected president of the United States,” Rep. Matt Gaetz, R-Fla., charged Monday on “Hannity.”

Gaetz was responding to a report published earlier Monday by Just the News which revealed that on Jan. 12, 2017, then-FBI Director James Comey had emailed then-Director of National Intelligence James Clapper and said that the FBI was “not able to sufficiently corroborate the reporting” in the now-infamous Steele dossier. The email was sent the same day Comey signed a FISA surveillance warrant that declared Steele’s reporting as verified.

“Not only did our own Justice Department set up the president on the Russia hoax, they did it with rotten information and they knew the information was rotten when they did it.”

“You know, I know, and all of the viewers know that there’s not going to be accountability under the Biden Justice Department,” Gaetz alleged, “because none of the career people there think the way to move up in the Biden Justice Department is to expose the Russia hoax. Instead they’re going to be targeting the President [Trump], his family members and the supporters of the America First movement.”

Hannity, Gaetz, and Chaffetz also blamed the failure to secure the Capitol on Nancy Pelosi.