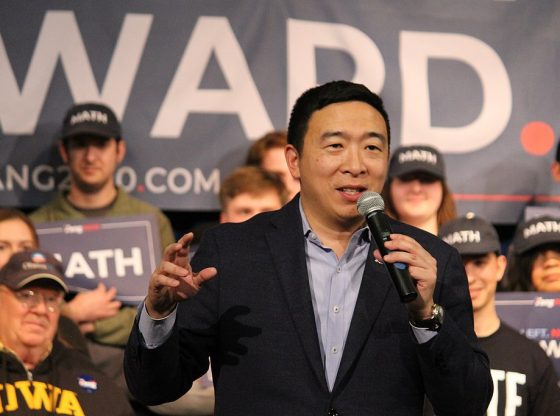 Former Democrats presidential candidate Andrew Yang has been hospitalized and all of his campaign events have been canceled.

Yang, who is running for Mayor of New York City, has been hospitalized with what appears to be complications from a kidney stone according to his staff.

“After experiencing abdominal pain this morning, Andrew Yang visited an emergency room where he was diagnosed with what appears to be a kidney stone,” the Democratic candidate’s campaign announced.

The campaign said that Yang’s public evens for Friday have been canceled but that the candidate “looks forward to getting back out on the trail in the days ahead.”

The 46-year old New York City entrepreneur grabbed national attending during the 2020 Democratic presidential primaries, as the one-time longest of long shots for the nomination saw his campaign briefly soar due, in part, to his push for each adult American to receive $1,000 a month as a part of a universal basic income.

Yang was at Yankee Stadium Thursday for opening day:

Yang became popular for his push for a universal basic income during the 2020 presidential campaign.

Have you not read the scriptures of what is to happen? Evil prospers in the last days. You’re right, evil does go unchecked, but maybe you should open the book to find out why.

This is in regards to the antichrist spirit, also known as Satan

Good book “The Bible in World History” Stephen Leston. It compares history of other nations and that of Israel. through the ages and Gods influence.

NOTES
2 Peter 2:1-3
King James Version
2 But there were false prophets also among the people, even as there shall be false teachers among you, who privily shall bring in damnable heresies, even denying the Lord that bought them, and bring upon themselves swift destruction.

2 And many shall follow their pernicious ways; by reason of whom the way of truth shall be evil spoken of.

3 And through covetousness shall they with feigned words make merchandise of you: whose judgment now of a long time lingereth not, and their damnation slumbereth not.

2 Timothy 3:13
“But evil men and seducers shall wax worse and worse, deceiving, and being deceived.”

That was Matthew 24. There are many scriptures like these. More often than the lovey dovey ones that churches talk about nowadays.

1 Timothy 4:1
“Now the Spirit speaketh expressly, that in the latter times some shall depart from the faith, giving heed to seducing spirits, and doctrines of devils;”

This is where we are at. This isn’t a flesh and blood fight.

Ephesians 6:12
King James Version
12 For we wrestle not against flesh and blood, but against principalities, against powers, against the rulers of the darkness of this world, against spiritual wickedness in high places.

If you aren’t saved. Get saved. It’s only gonna get worse. Not better. Your only escape is up, and that’s by the Lord Jesus Christ.

Acts 16:31
“And they said, Believe on the Lord Jesus Christ, and thou shalt be saved, and thy house.”

i am making a good salary from home 1200 to 2500 Dollars per week.which is amazing, under a year back I was jobless in a horrible economy. I thank God every day I was blessed with these instructions and now it’s my duty to pay it forward and share it with Everyone,
…..> Profitskeys.Com

hope he does not have obamacare, othewise he will end up in the covid wing of cuomo hospital

I hope they don’t send him to a nursing home to recuperate!

That’s unfortunate. He’s one of the more moderate dems. He’s a good friend of Elon Musk as well. For his sake, I hope he makes a speedy recovery.

“More moderate?”
Wanting to give every adult $1,000 a month of taxpayers money? Seriously?

Karma will get you no matter how rich you are

Well chief. You are now being asked to be presented before your god, Satan. Bon Voyage….asshole…

Andrew Yang needs prayers whether you like him or not. Preferably pray for his conversion because Jesus didn’t come to save the” Just” but sinners. Christian’s do not forget to pray for everyone.

If you are a doctor and a leftist Democrat comes into your office wouldn’t the first step be to check for a brain tumor?

Check the lefty for evidence of a prefrontal lobotomy.

Not going to get all religious and repeat scripture. I just don’t like the guy because he is a socialist and left wing hack. Hey I hope he recovers, do not wish any ill will to him. He is just now what I would want to represent me or any district in this country. He doesn’t understand the U.S. Constitution along with other Democrats. They swear an oath to protect and defend it then as soon as they take office, begin to shred it.

Keep salt to a minimum in your diet. Doctor’s order.

Thoughts and prayers to Andrew Yang

Ying Yang is running for Mayor?

He is the joke of April and the worse joke in history. Hahahahaha…

They diagnosed abdominal pain as a “Kidney Stone”???? The kidneys, ureter, etc. are in the back. I’ve had kidney stones for like 40 years…one kidney or two kidneys simultaneously. My friend died of kidney stones! Kidney stone pain is in the lower part of one’s back! You may have some abdominal pain but you won’t get away without the incredible back pain. Ask anyone who has had them!!!! Wow!

The pain is so unbearable that is worse than a woman having a baby. Believe me, I know cause I had it myself.