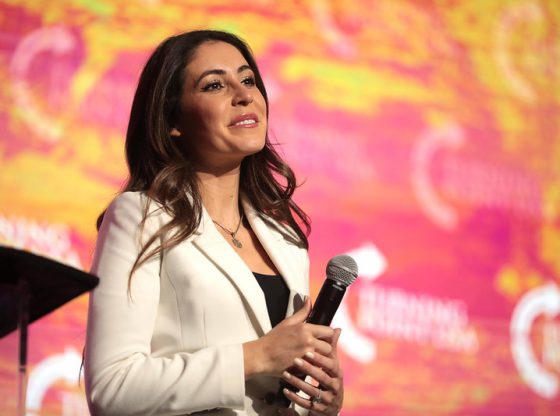 Republican representative hopeful Anna Paulina Luna is standing up for herself against the tyranny of Big Tech and suing the Federal Election Commission. In 2020, Luna ran to flip Florida Democrat Rep. Charlie Crist’s seat. Ultimately, Luna lost the race by six percentage points but she says she is committed to running again next year. Christ recently announced his gubernatorial challenge to wildly popular GOP Gov. Ron DeSantis.

In 2022, voters will reject the liberal elite's:

However, according to Luna’s legal filings throughout the campaign cycle, Twitter’s obvious liberal bias shone through and ultimately affected the election in favor of Democrat Charlie Crist. Luna says that despite repeated attempts to have her Twitter account verified and meeting the platform’s criteria her requests were ignored while her opponent’s account received the blue checkmark.

The suit states, “accounts that are verified by Twitter convey credibility, have a demonstrably higher monetary value and automatically jump to the top of search results.”

Luna’s complaint with the FEC was first filed in October but has yet to be addressed. The lawsuit states, “Twitter has violated the Act’s prohibition on corporate contributions by providing something of value to certain candidates but not to the plaintiff.”

Now, Luna says that because the FEC has taken more than 120 days to respond to her initial complaint she is asking the court to “declare that the FEC has acted contrary to law by failing to act on the administrative complaint and to order the FEC to conform with that declaration within 30 days,” according to the FEC updates website.

According to the Federal Campaign Act, “The Federal Election Campaign Act prohibits corporations and labor organizations from making contributions in connection with federal elections.” This includes “something of value” which is broadly defined by the FEC and Luna says Twitter’s blue checkmark clearly falls under the qualification.

Twitter has repeatedly been accused of favoring Democrats over Republicans with the decision to permanently ban former President Trump sending the conversation into overdrive. Republican lawmakers have repeatedly called on the platform to hold other accounts that promote political violence to the same standards as conservatives yet those requests have largely gone unanswered.

Biden and his administration are destroying this great country!! They need to be shut down!

I truly hope Ms. Luna is successful in her next bid. We need people who have the backbone to stand against marxists like Nancy Putz and her lackeys.

America’s best bet is to kiss twitter, facebook, google & amazon prime goodbye. These companies use YOUR money to silence whoever they please! “If” you’re a Dem, you’re happy. “If” you’re a conservative about anything, you get no say! SO “who’s” got freedom & who doesn’t! Apparently “it’s who’s who & the rest doesn’t matter! Is this America or Venuezula?

Remember the Obummer / He said he would bring down the USA and rebuild it his way. Welcome to Obummer world.

This is his 3rd term

And the Middle East is now a powder keg…
It was pretty quiet with 45!
Now 46 is degrading one of my old football number
and Chicago Bears famed defense!
The LOSERS have to GO!

You go girl, I’M BEHIND YOU ALL THE WAY

Every dictatorial regime since Gutenberg’s printing press has used media to further its power. Hitler had the National Socialist German Workers’ Party (NSDAP) paper. Stalin had Pravda, the official outlet of the Soviet Union’s Communist Party. Mussolini had he People of Italy, a daily newspaper that hammered home the benefits of fascism. Hirohito had his choice since he was an emperor descended from God. The primary paper was the Japan Times.

Seems democrat leaders are more like emperors than despots. They have their choice of CNN, MSNBC, ABC, CBS, NBC, WaPo, NY Times, LA Times, San Francisco Chronicle, Houston Chronicle, Dallas Morning News, Twitter, Facebook, YouTube and an endless list of other lesser socialist outlets. Those who support the constitutional republic formed by ousting King George are at a grave disadvantage as they approach their “fight or flight” decision.

This is why Mr dorsey needs to be fitted for a prison jumpsuit,that will last 30 years or so.hes a Marxist commie.needs prosecuted as such.wheres the doj ?? Fbi?? Homeland?? Ya,yall suck too.

Thank you Anna Paulina Luna. Charlie Crist is a corrupt lawyer / politician. He bailed on the Republican Party when he found out he could steal money as a Democrat politician. He is a sleaze bag.

If John Kennedy got the female vote because they thought he was young, handsome and physically fit….
then I can vote for Anna Paulina Luna because I think she’s a hottie.

Hey, if you know that NO POLITICIAN is going to represent you or the best interests of our country…. then you might as well vote for one that you won’t mind looking at on TV for at least a couple of years.

The real issue is that a federal court order needs to move all media corporations to allow all candidates and politicians equal platform or to FORBID any interference of any kind…..
OR make those media responsible for any actions taken by groups like BLM and ANTIFA if there is platform for them.
In other words….put up or get out of the way. Also, I believe that any share holders should be allowed to sue for use of profit for political purpose. In other words corporate theft of shareholder profits to forward political gain by officers of the corporation.

Excellent post—I wish you could get some traction for your thoughts.

BIDEN & DEM’s are FAILURES OF AMERICA