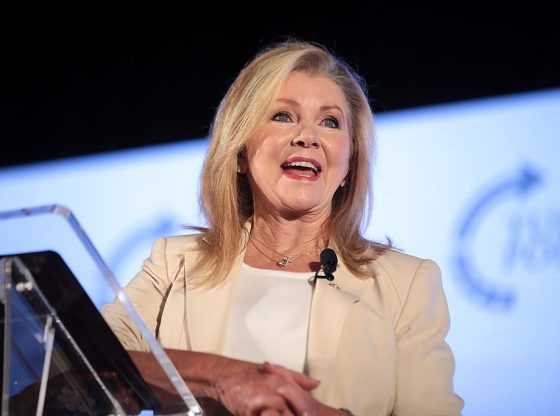 Tennessee Senator Marsha Blackburn is reportedly set to announce a new bill that seeks to reinstate former President Trump’s Migrant Protection Protocols. In an effort to respond to the massive surge of illegal immigrants crossing the border The Make the Migrant Protection Protocols Mandatory Act also known as the “Remain In Mexico” policy would require immigrants that cross the border without required documentation to remain in Mexico until their case is heard.

“President Biden’s failed immigration policies have created a crisis at our southern border,” Blackburn said in a statement. “Over half a million illegal aliens have poured across our southern border since Biden decided to repeal President Trump’s successful policy that forced migrants to remain in Mexico while seeking asylum. My legislation will stop Biden’s decision to catch and release migrants into our communities and reinstate President Trump’s Remain in Mexico program.”

The Trump administration first instituted the Migrant Protection Protocols, also known as the “Remain in Mexico” policy, in 2019 in a bid to end “catch and release,” a policy under which migrants were allowed to remain in the country while awaiting court proceedings. MPP drew criticism from Democrats who argued Trump’s immigration policies were cruel and inhumane.

But Blackburn and other Republican lawmakers have argued that Biden’s move to weaken or reverse Trump-era immigration policies prompted the current crisis at the southern border. Customs and Border Protection reported encounters with more than 178,000 migrants attempting to enter the country in April alone, an increase of more than 900% compared to one year earlier.

Aside from restoring MPP, Blackburn’s bill would tighten restrictions on asylum seekers and mandate an end to the “catch and release” policy.

One of Biden’s first acts as President involved rescinding a number of Trump’s border protocols. Over the past months, the U.S. has seen illegal crossings spike at record rates and quickly overwhelm immigration resources. President Biden has refused to take responsibility for the crisis he has created and has attempted to blame his predecessor.

Upgrade first-time illegal entry into the country from a misdemeanor to a felony. End the anchor baby scam by enforcing the 14th Amendment provision “and subject to the jurisdiction thereof.” Anchor babies cannot be properly defined as citizens because their parents are illegal aliens. They are children of lawlessness, and illegal alien parents do not deserve for their anchor babies to be citizens of the host country. This, plus giving illegal aliens undeserved benefits, rewards their criminal misconduct, and only serves to entice more of them to come here. Make English the one official language of this country once and for all. Stop catering to non-English speaking immigrants, and require that they learn English. No more swearing in of immigrants as citizens in any language other than English. Voter ballots in English only. My Czech grandfather, only about seven years old when World War I broke out, and he and his family had to endure four years of unspeakable hell, and had to wait for two more years until they could come here legally in 1920. My grandfather was then about thirteen. My Ukrainian grandmother was only about 8 or 9 when Communist Russia seized her native land. She and her family endured almost nine terrible years under Communism before they could come here legally in 1928. My grandparents had four children, saved money to buy a small farm, and prospered there for decades. They became and appreciated being Americans. They raised their children to be the same. The terrible mess that this country faces today must be making my grandparents turn over in their graves!