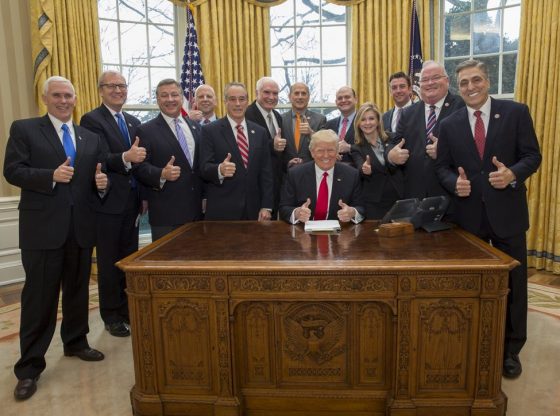 In his announcement video, Barletta rebuked Gov. Tom Wolf, a Democrat, for his handling of the coronavirus. Wolf is not eligible to run for reelection again due to a two-term limit.

The Pennsylvania we all grew up with, the one we all knew just a few years ago, is slipping away from us. Our way of life changed dramatically during the pandemic,” Barletta said. “Look, everyone’s did. But here in Pennsylvania, it was made so much worse by politicians, politicians who weren’t just looking to stop a virus, but politicians hell-bent on trying to change who we are and how we live.”

“These politicians, and I’m talking about Gov. Wolf and the Harrisburg insiders, they had a disastrous response to the pandemic,” he added, before accusing him of having “blood on his hands for sentencing our seniors to die in nursing homes.”

The former congressman echoed Trump’s dubious claims about the outcome of the 2020 election, telling theoutlet in December that “there’s no question there was fraud” and, as a result, “no one knows” for sure who the legitimate winner is.

Former President Trump hasn’t officially endorsed Barletta’s gubernatorial campaign yet but the Republican has revealed he is vying for the golden ticket from Trump. So far, only one other Republican has announced his campaign for governor, Joe Gale, a Montgomery County commissioner.

“No clue” what Hazelton, Pa. is NOW, but in 1950’s it was coal country with a LOT of hilly roads! My WW2 “Dad” threw us into a car for our Sunday “joy” rides to “ashkosh”, which “meant” wherever we were gonna end up.”HE” had to look up an old WW2 “buddy” & “dropping in then” was like visiting family. SOMEHOW “these people” always had food, greeted us “warmly”, & “welcomed” us! “We” were a family of 5! He “did” the same “thing” in Warwick, N.Y.!”Same thing”! “Different Era”, “different times”& my Mom & Dad ALWAYS had food, drink ,BBQ & you name it for “whoever”dropped in on weekends. Seems to “me” that Hazelton, Pa. “people” are “down to earth ” people. “No” clue “What” “life” is like now.re; jobs, manufacturing etc.! Hopefully, these “people” will “figure out” what’s best for THEM , “WITH” HONEST ELECTIONS!

That applies to any Blue state in America.

We want more Conservative, Constitutional People to run, but what good does it do when the left and all the One World Government worshippers cheat by any means possible?