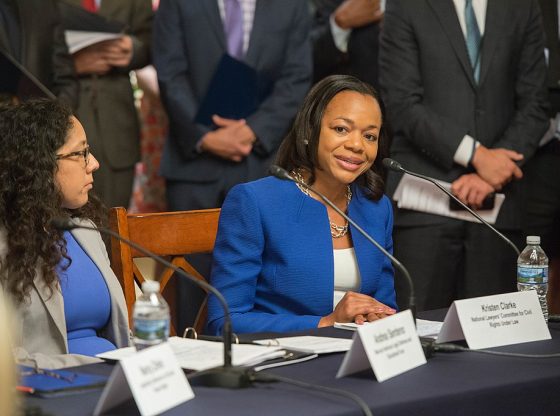 President Biden’s nominee to run the Justice Department’s Civil Rights Division was just confirmed by a 51-48. Senator Susan Collins voted along with Democrats to confirm Kristen Clarke, the first Black woman to lead the division and will now serve as assistant attorney general of civil rights.

Clarke’s nomination was voted out of committee in a split 11-11 tie vote that ran down partisan lines.

Executive nominees like Clarke can be confirmed by a simple majority vote. The Senate invoked cloture in a 51-48 vote earlier Tuesday to end debate and move to a final vote later in the afternoon.

Clarke’s confirmation was controversial because of her prolific Twitter use, where she would often launch broadsides against some senators, including Sen. Joe Manchin, D-W. Va., and Sen. Lisa Murkowski, R-Alaska. Clarke also has a history of controversial writings, including a 2020 Newsweek op-ed headlined: “I Prosecuted Police Killings. Defund the Police—But Be Strategic.”

The vote was held on the anniversary of George Floyd’s death and she previously served in former President Obama’s Justice Department.

Kristen Clarke is unfit to lead the Civil Rights Division at the @DOJ. I voted against her confirmation because I am concerned about her ability to be impartial and fairly enforce the law based on her radical views.

Susan Collins is a Democrap , wearing an elephant suit. Time to get rid of her. I am sick of RINOs and “never Trumpers”.

I agree, but the bitch would have been confirmed anyway. Put Collins into the “no” column and the vote is still 50-49. Sad.

Can’t do it. She just got reelected and basically has 6 years. Sometime ago I called her office.
Her turds informed me that she was a moderate Republican. Soooooo, there you have it.
RINO TO THE CORE.

Perhaps it is time for “Devine Intervention”. It would be wonderful for the Republican Party and for the country if she died this summer – of some horrible disease that affects ONLY RINOS. She’s too ugly to live anyway.

And product was good thow if you could do that for the rest of those DAMOCRAPS. We could have a beautiful day.

That was supposed to say . the end product was good

So are you too ugly and should be quiet

Have a care, Henry. Did you know? He who digs a pit for others is oft apt to fall into it himself. It is Scriptural.

Little Susie is in trouble. Apparently she is being investigated about donations to her last election funds. Not sure something about contractors????

Even more if the money is right.

That is what a recall is for.

Nancy, she’s from Maine. Think about that….

So.whst else is new I don’t know why they don’t excuse Susan Collins from her duties in tbe republican party she is lying to.all the American people that vote for her as a republican has no one noticed that she always sides with the democrates on any vote she is a lying Trojan horse that says and runs as a republican but clearly is a Democrat and she need out in her place fired would be best but at least put out of office enough of her and her lies that she is a republican NOT TRUE AT ALL

and the GOP thinks they can stop removal of filibuster, because Manchen is against it’s removal, BUT people forget about RINOs like S Collin,S Murkowski, M romney. there may be 10 RINOs in senate to vote with dems.

Exactly. That’s one of the biggest problems we have. Haven’t learned a thing from the other side. They always defend and stick with their own no matter what.
We’re stuck with way to many that obviously don’t understand that.

I just responded to your post.
They’re holding it for no reason.
This is getting ridiculous.

Unfortunately Maine does not have the power of recall; perhaps the US Senate could conjure up enough mojo to censure her and send her away; if not this year, then next year for sure. Hopefully we won’t be too damn late.

There is NO BACKBONE in GOP senators. MOST of them ARE COWARDS

What’s the matter with Maine? Can’t they find a Republican that is Republican and would vote with the caucus on these type of issues? Susan Collins just got elected in 2020 so we will have to put up with her antics for another five years. She will then retire, but that won’t help us out now. Maine is a fairly liberal state or at least they vote that way.

Will she lead investigations into BATFE antics, one wonders, as there most certainly enough to investigate.

The good people of Maine need to vote Susan Collins out of office ASAP. She is a phony that has screwed the conservative Republicans many times. If she wants to she should try being honest and run as a liberal Democrat.

Democrats cannot accept anyone in government who is not racist. And Negroes are the easiest to find, since almost all Negro politicians are hard-over racists. Americans must face the fact that the Democrat Party is “no damn good”!

And Susan Collins is SUCH a hard-over racist RINO Why is she allowed to serve as a Republican? She should be “primaried” ASAP. She is also “no damn good”!

Can you all pls stop bringing up the name of the criminal George, the druggee…

50 years of affirmative action! Or is it more?

I voted for her because the other option was a radical left wing idiot.

There is a way to punish someone without lifting a finger and it’s done all the time. It’s called shunning and it’s a weapon used by the Amish.
No one, not one single soul speaks to the person condemned to shunning. It is guaranteed to work. I don’t know how long you ‘shun’ I would have no trouble shunning Susan Collins forever. . .

Wouldn’t that be awesome? But, even when our side goes on TV they always refer to the leftists as their friends. It’s so infuriating.

Susan Collins needs to be kicked out of the GOP like they did Liz Cheney, she is damaged goods to the republican party, she has done nothing but side with the democracts for along time. This GOP member is worthless and needs to be fired. Only way she had won her seat is sucking up to the democracts.

Well the ONLY reason Murkowski and Manchin didn’t vote for is because Clarke repeatedly blasted them on Twitter.
It’s “personal.” It always is!!!!!
Is Clarke a racist against white people …, dang right she is.
Is Susan Collins a goof who absolutely must be replaced..,,, dang right.

Susan Collins you are a traitor to the people. You do lie and act like a republican, very well. You are a two-legged traitorous creature. Sad, very sad creature

There used to be bipartisan cooperation in Congress. Republicans like her think capitulating to the Democrat’s desires shows bipartisanship and they will once again be allowed to be part of the ‘IN’ crowd and receive their share of perks and bonuses. Susan-you let them USE you-AGAIN-what did you get for that?

With new rules by dumercrats we can form a large caravan and go there and vote against her.

No surprise here, collins is a tried and true PIECE OF FECAL MATTER!

ARE YOU KIDDING ME! How long are we gonna put up with these people who do not represent those they have taken an oath to do so?

Collins is a worthless,incompetent, traitor, in sheeps clothing, she should be in the liberal,socialist,marxist dummycrap commie party. She needs to be voted out,impeached,run out of the party.

One party government-Demoncrap-talk about discrimination, biased and socialism.
This HAS NOT WORKED FROM THE PAST.-OLD/FAILED GOVERNMENT