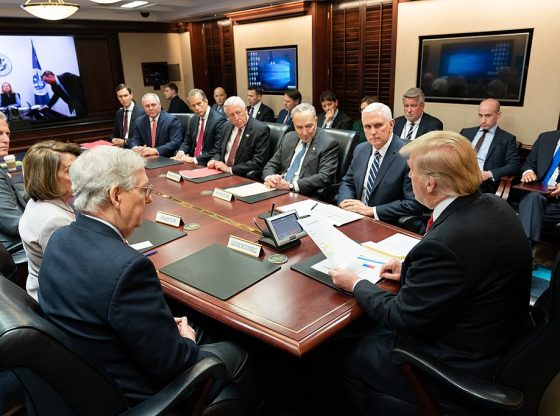 Top Trump adviser Jason Miller is leaving his role working for President Trump to work for an unnamed tech start-up.

The report indicates that the tech start-up owns one of the social media platforms Trump will join, so it doesn’t appear that Miller is leaving Trump world completely or on bad terms.

Jason Miller, a longtime Trump campaign aide, will be leaving his role as the former president’s chief spokesperson for a job leading a tech start-up company, two people familiar with the plans confirmed Thursday.

Miller has been Trump’s spokesperson since he left office in January after working as a strategist on the 2020 campaign. He is expected to remain in Trump’s orbit, but will no longer be involved with day-to-day operations.

It was not immediately clear which company Miller was joining, but an official said it owns one of the social media platforms Trump is considering joining after being banned from Twitter and suspended from Facebook over his incendiary and baseless claims about fraud in the 2020 election that led up to and followed the Jan. 6 Capitol riot.

Miller was a top adviser to President Trump during his campaign in 2016 and has been a staunch defender of Trump. We will provide you updates on where Miller lands once that information becomes available.

Advertisement
Jim Jordan Needs YOUR Help [ACT NOW]
MURDOCK: Memo to Manchin: Join the GOP
Harris Snaps at Another Reporter When Asked When She Will Visit Border

The former President is sometimes imprecise with his words. While there are several ongoing election audits in several states, the nature of the election processes does not normally lend itself to seeing fraud. However, there were clear illegalities taking place with election officials and executives in several states changing election practices, under the guise of covid19 prevention, without authority to do so, since that is supposed to be the province of the state legislatures. And it was this illegality in several states that could have caused the election to turn to Biden. I believe this is what the former President is referring to when he speaks of fraud. I could be mistaken in this, but these illegalities did take place, regardless of whether Trump was speaking to this or not.

I totally agree some of these writer’s these days do not do their due diligence and write their opinion instead of the facts! There was fraud going on and there’s been witnesses swearing under an affidavit to that fact, hard to find True Facts anymore unless you research it yourself…

If you agree that delivering buckets of ballots into the counting room after there was no oversight, as happened in Michigan, is a sign of fraud, then the election was fraudulently executed.

You said it better. I said it shorter. Thanks.

I agree! That these allegations were laughed away by the leftist media and politicians so angered and frustrated me, I have had to walk away from politics for my health.
That Republicans, including Pence, allowed the election results to stand as they were without question, also finished me off in supporting the GOP because they never stop caving in to the dems!!

There were too many violations of actual voter processes that are put in place to stop fraud. For example, the seals on the voting machines are put there to insure no changes are made to the machines during the voting process. Once removed, that makes all votes on that machine invalid. That’s a process to stop tampering! Obviously removal makes it impossible to insure no tampering was done. The database that tracks any modifications was erased before the audit, which violated another constitutional law! They are hiding something and who knows if the audit will be able to ever uncover what was done. People that allowed this to happen need to be fired, and prosecuted for not doing their constitutional duty to protect the integrity of an election.

Can someone please explain in simple English the fundamentals of Trump’s new social media platform. Many of us older conservatives learn the basics by trial and error, mostly error. Internet queries often return jargon understood only by the children who grew up with the Zuckerberg, Bezos, Dorsey, et al., products.

Your comment are so lovely sincere, and true! Welcome to my world dear!

Judging for the comments here though you are not going to get an intelligent response.

LISTEN UP…GOD Says….PREZ TRUMP Did NOT Get a F AIR ELECTION and DEREK CHAUVIN Did NOT Get a FAIR TRIAL. GOD is SEPARATING the GOOD APP LES from the BAD ONES. GOD is NOT a LIAR. HE is the TRUTH. GOD is the RULER of MEN. HE has the LAST WORD. From SamuraiQueen. 😄😄😄

His claims of fraud in the election were far from “baseless”.

Just a suggestion to Trump Train News – in the future, don’t quote articles from The Hill or any other publication that judgmentally characterize President Trump’s claims about election fraud as “incendiary and baseless “. Few, if any, of your readers agree with that statement . Leave it for the liberal garbage.

Trump needs to buy his OWN MEDIA/Production machine.
We are all on board.
Demonrats have theirs.

As for Trump interviewing for Jason Miller replacement: Main Street need not apply!
Will he task his new best friend Graham and Gingrich, Swamp Rats, to fill the post? Maybe as a gesture of bribery he will ask Red Mitch McConnell’s wife Elaine Chow, that was a huge pay off to the Swamp that bit him in the arss! or tap into RHINO and anti-Trumper McCarthy’s list of contacts and bring in a Boehner/Ryan apprentice. And his other best friend Chris Cristi who gets a pass on dumping on Trump regularly. What will be certain, it will be another bull shit line and a member of the SWAMP as Trump leans closer and closer to gaining membership with: THE SWAMP!
It is all about legacy now, Main Street has been erased off the speed dial and replaced by DC Politicians. Trump is continues praising Lindell, Powell, Flynn and other great Patriots but they never get past the door screener as Trump intentionally chooses from the SWAMP. Get set for disappointment America as the failures of Trump Term are omitted from discussions and dismissed by blaming others. atypical Politician!

The hiring process was mainly what brought him down, he surrounded with pure SWAMP connected people, the reason this is not been talked about is that he does not need any more fire on his table, this man has endure an endless attack since he announced his candidacy in 2015. However we Trumpers hope that he has perhaps learned that lesson well, if not his future will be a bleak one for sure. But there are some benefits that this ordeal has brought us and that is the final exposure of all these traitors that are no longer able to disguise as politicians, they are now naked for everyone to see.