Trump Jr. Says Who Should Run in 2024 if His Father Doesn’t

Home /NEWS/Trump Jr. Says Who Should Run in 2024 if His Father Doesn’t

Trump Jr. Says Who Should Run in 2024 if His Father Doesn’t 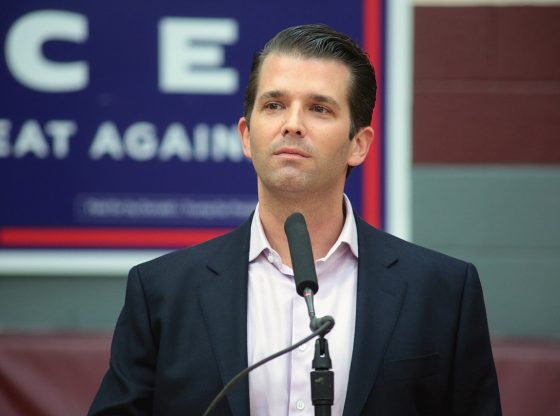 While former President Trump has strongly hinted at mounting a third presidential campaign in 2024 he’s still keeping details close to the vest. During an interview with The Washington Examiner, Trump’s son Donald Jr. gave some insight into who he thinks will win the Republican nomination if his father doesn’t run.

“You’ll have to ask him,” Trump Jr. laughed when asked about a third run for his family’s patriarch.

“If I’m going to be totally objective about it,” he said when pressed on the current slate of Republicans already angling for the nomination, “I think, you know, what Ron DeSantis has done in Florida is outstanding.”

“I mean, he didn’t fall for the narrative. I think he’s learned, perhaps through watching [Donald] Trump, you know, what the media will try to do to you if you do take those kinds of stances,” the former first son added. “I think he’s been proven, you know, virtually 100% correct on those things.”

Trump Jr. contended that DeSantis has “certainly a very bright continuing future, whether that’s with my father, whether that’s — if my father doesn’t run — on his own.” The son appeared to, like his father, suggest DeSantis would make a solid running mate for the Donald, which would mean ditching former Vice President Mike Pence.

Multiple polls have shown DeSantis as the top contender if Trump doesn’t launch another campaign but with 2024 still be far in the distance the field is wide open.

That is my pick as well.
I love President Trump, but, I’m concerned if he runs again. The media hasn’t yet left him alone, they will be like voulchers if he runs again.
Governor Desantis will be phenomenal as well.

Do you think the media would be any kinder to DeSantis?

They hate anyone who is a conservative and promotes godly morals! They call evil good and good evil! They are criminals who only want criminals in leadership!

Liberal, Conservative, or crazy Woke, the Big question is have they accepted God’s Savior and kept his laws. Too many people have not taken a stand for whats right, lawful, and honorable. They want to play politically correct games and are obsessed with themselves and their power and every kind of evil deed.

Romans 1:25 “But after thy hardness and impenitent heart treasures up unto thyself wrath against the day of wrath and the revelation of the righteous judgment of God, who will render to every man according to his deeds.” WE need to support honest, lawful, brave leadership that do whats right for their own people, and we’ve seen that from Governor DeSantis.

No I don’t. But, Governor Desantis doesn’t bring with him all the controversy that President Trump does. I know the tweeting issue is such a stupid issue, but some didn’t vote for President Trump because of that. Then they would drag up the impeachment(s)
January 6th, and on and on. This would be horrible for President Trump and the Nation.
Don’t give me wrong. I loved the 4 years we had him, and voted for him in 2020. But, ultimately I think we could benefit from someone new.

The commies will bring up ANYTHING n ANYBODY. Maybe DeSantis spit on the playground in third grade or got a ticket for littering. The FAKE media will make a mountain out of an ANT hill; let alone a mole hill!

So very true. We need a leader that everyone can support for the good of the country. If Trump ran in 2024 it would be more of the same and, if he won which is possilbe after 4 years of Biden/Harris, it woulod be 4 years of total chaos again.

We aren’t going to see harmony with the left no matter what Republican runs, its a FIGHT ALL THE WAY, get used to it. Do you think somebody who is not a fighter is going to win against the Soros, Obama, Clinton, globalist RADICAL MACHINE?

Hell no, the media would be on him like stink on sheete !!!!

Perhaps not but DeSantis would handle himself better and get the public behind him. I believe he would be a uniter which this country sorely needs if we are to survive as a nation. Trump had many great policies but his ability to deal with anyone (including 2 bit Hollywood stars) was awful. Very petty spats with everyone who dared to say anything milldy critical of him. My concern is Trump attacking Republican in the elction leading to the Democrat winning.

No, Remember the liberal global agenda is never going to accept anyone who is Conservative, but we cannot give up the fight. Most of America is fed up with a culture and a government that has went crazy and promotes chaos, division, anti-semitism,corruption, lawlessness, and doesn’t even represent them anymore.

So are you trying to say if the Republican Party picks a rino, the media and the left will be kinder? Thats what the left hopes for because the Rinos are in step with their global agenda.

I certainly thought about that very thing but the reality is the media wants to obliterate anyone who is not a progressive. No one would be treated differently if they followed the Constitution and stood of for the US. They want socialism/communism and globalist rule. I do not understand it as these people all have families and how could they wish that on their children and grandchildren? As I pray to our Lord and Savior I ask that question all the time. Maybe that is the answer, they do not have faith in Jesus. So sad!

When the politicians allow fraud and stollen elections, the country is going to be in decline because everything that was lawful, solid, promoted jobs and prosperity, security, and equality has been ripped from our society.

President Trump is the only choice for 2024. The 2020 election, which was rightfully a win, was stolen from him and the American people. Governor DeSantis should be his pick for V.P., then he can run for president in 2028.

President Trump should be the President from 2020 to 2024. The Rinos also contributed to the lies and the stollen elections by not defending the truth, they are no better than the Democrats.

I am 100% for President Trump. If he decides not to run either Ron DeSantis or Josh Hawley would be my pick.

DJT back in the WH in the next few months and to stay as President until 2026, due to the devious mayhem created by the liberal-marxists to Trump and the country in both 2016 & 2020. Then Ron DeSantis for President in 2026 (for a 6 year term, to get the presidential elections back on track in 2032.) Then Ron DeSantis for a second term in 2032.

All good choices for VP, but I would add Candace Owens. I like her because of her tenacity and also she’s not held office before like President Trump the first time he ran which I consider a plus. I think she could take on any and all opposition and clean clock.

I’d agree and add that his only equal is Greg Abbott.

JD Trump is my President. He won the 2020 election. I propose a seven year term, to restore what was stolen and set in place God Almighty’s, who created heaven and earth:
Will, Plan, Purpose and Destiny.
His will be done on earth as it is in heaven.

Correction:
DJ Trump is the dully elected President, who won the 2020 election.

We need a President who doesn’t buckle under the pressure of the marxist left, its a tough job that requires stamina, and confidence to not allow the corruption and the lies and propaganda from the Swamp and the Globalists to derail a Pro-American agenda, because overwhelmingly, the American people do NOT want socialism and marxism….the last election of 2020 was stollen because the left cannot compete with freedom, capitalism, security, and values that we hold dear in this country.

I love Donald Trump and want to see him as president again. But I think DeSantis should be our guy next time. He’s young, energetic,, well liked and has already made a good name for himself and is what we need to defeat the democrats. He reminds me of Obama for the left back in 2008. He’s star quality. As much as I love Trump he will be 78 years old in 2024 and people will not vote for him because of his age. Plus you’ve got the people who just won’t vote for him for stupid reasons like he tweets mean or he’s a supposed racist or whatever. The suburban wine moms just won’t pull the lever for him when it comes down to it. Plus I hate to see the man have to go through another 4 years what he already had to endure for 4 years. Not that the media would be kind at all to DeSantis but they wouldn’t have as much Trump Derangement Syndrome with him. Also Trump can only be president one term so that gives the left more time to find a candidate for the open election of 2028. However I think Trump would make an excellent governor for Florida.

Plus they stole the election from Trump once. Don’t think they wouldn’t do it again. Hopefully they would fall asleep on DeSantis and he would get the win. If Trump runs again as the nominee there’ll be no low the left and RINO’s wouldn’t stoop to to keep him out of office.

I don’t blame you. Good governors who are moral, do their job for their state, and stand up to the liberal lying media, and crazy anarchist groups is a keeper.

NO “clue” who Pres. Trump would want. I just KNOW that it would NOT be a SNAKE, who would betray him. He’s “been there, done that”, & I “think” Trump’s a lot wiser & smarter NOW, since he “knows” how deep the swamp really is. THIS is GLOBAL! Unlike Biden who is “clueless”, Trump “gets the message” & has “figured it’ all out. So Trump is building a “base. AMERICA is right behind him. AMERICA is a “bunch” of ALL “kinds” of people, who want ALL of “us” to “live & let live”, & NOBODY HATES ANYBODY!. Isn’t “that” WHY everybody comes to AMERICA?

Does anyone really care what Donald, Jr has to say? I like deSantis and hope he is the nominee in 2024 – possilbly with Nicki Haleynor Tom Cotton as VP. Being the VP on a Trump ticket would be suicide for Ron.

Alot of people are trying to steer the Republican party to more moderates with their opinions, and I want none of it. Its a sneaky way to try and get another Rino to run for President who will also betray this country.