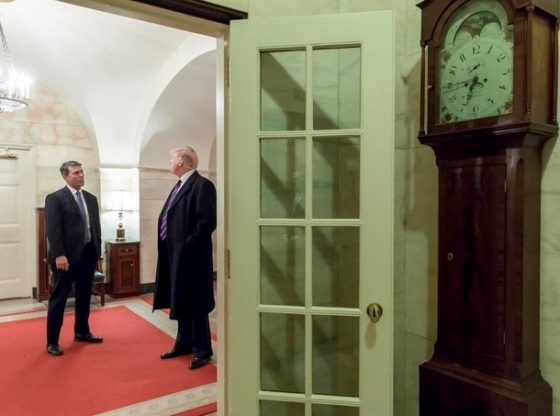 Representative Ronny Jackson (R-Texas) who served as the presidential doctor under both Obama and Trump has called for an immediate inquiry into Biden’s cognitive abilities.

Dr. Ronny Jackson, the former White House physician, called on President Biden to immediately undergo a cognitive test so the commander-in-chief can prove to the American public sound mental capabilities.

“He’s not physically or cognitively fit to be our president right now,” Jackson added.

The freshman Texas congressman and 13 of his GOP colleagues sent a letter to Biden Thursday expressing “concern” with his cognitive state and cited several examples of potential memory lapses, including apparently forgetting the name of his Defense Secretary, telling an Amtrak story with a timeline that didn’t add up and seemingly blanking on the often-quoted first line of the Declaration of Independence.

Biden continues to have trouble conveying even the simplest ideas, something that is incredibly scary for the most powerful man in the world.

Even the democrats should demand his resignation. This president has demonstrated throughout his career that he’s not fit to lead. Now that he’s stricken with dementia, he should voluntarily leave or be forced out. The GOP has neither the strength nor resolve to initiate legal action. Democrats must remove him. Delay could spell disaster.

the dems are having there on purpose! They’ll get rid of him when they’re done with destroying our country! He is a corrupt, evil lying PO… Perfect for there agenda!.

Think about what happens if Biden goes. = You would rather have Kamshaft?

The nation is in danger with either one!

Biden is an IDIOT suffering from severe dementia that gets worse every day! He is an embarrassment to this country and is the laughing stock of the world. The continuing damage he and his administration are doing to America must be stopped!

Again, Do you actually think it would be better to have Kamshaft as president?

Then you need to go after obombsturd

I’m sure Putin the sly dog was thoroughly amused by Biden’s behavior.

Add kamala to that assessment. She is not all their either.

So then if both prove incompetent’s, then we will have President Pelosi, who I may say is just as mentally challenged.

The alternative is worse…heels up headboard harris who couldn’t get 1% in the democrat primary…they both need to go.

Either one is equally bad because they’re not the ones making the decisions. They were chosen by their handlers because they’ve proven themselves to be totally corrupt and willing to sell access to their power for large amounts of money. They just had hoped O’Biden wouldn’t have proved himself to be so obviously demented at this point. It’s really hard to hide the fact that he’s completely incompetent. They’ll have to do something soon before it gets even worse.

KAmshaft would be FAR worse.

She would just laugh at everything

Hillary has that same cackle. Is it a requirement for democrat women who wish to be president?

This administration was forced upon us by a fraudulent election and total corruption from the Swamp and their global partners.

Yeah and the we have another misfit for President called Kamala! I love the idea of Trump running for House of Reps. Being voted Speaker and then Biden goes and Kamala is impeached. Trump steps back into the White House with the ability to run again. now that’s a strategy I can live with.

He’s not wrong, but heaven forbid that leaves us with President Headboard Harris. Can you imagine?!?!! It’s unfathomable.

Biden is suffering from dementia and given that, he is no longer capable of being the President! He should be replaced at once by whomever is next in line for the Presidency! Anything else is unacceptable!

Don’t you know who becomes president if the siting president is unable to perform in office. (Hint SHE slepthe way into office)

The person next in line is also just as depraved as Biden.

This communist regime won’t do any test.
Because the cat will be out of the bag.
So sad what his wife is doing… elder abuse.

As if we already didn’t know this, even back when he was campaigning from his basement in DE?
C’mon man, only a blind man wouldn’t see it.

Even the Honking Geese could see it, and also the Crickets.

The whole administration is suspect and needs to be removed. They have failed to protect the country by allowing this charade to continue.

What are they thinking? Republicians ignoring unintended consequences even more then the Commies (AKA Democrats) If they bounce sleepy Joe out Kamshaft becomes president.
Biden might be a class one dunderhead but is he worlds better then a NWO Marxist “green deal” whore..

We totally blew it in November 2020. Now the ONLY thing to do is get as many commies out of congress nest year and gut it out until 2023. .

Pray Mathew, if you are religious!

But the alternative is even worse. To go from Joe to Ho will be the end of America

The end result will be the same since the same people who are pulling O’Bidens strings are the ones who would be pulling Kamala’s. The only difference is that we’ll hear annoying cackling instead of “C’mon Man” when the puppet is cornered by a question she knows she doesn’t have an answer for. The same goes for Pelosi should she somehow ascend to the office. These Democrats are all extremely stupid people who don’t have a clue how to govern or lead. They only know how to sell access to people who make the real decisions and those decisions are obviously intended to destroy our country from the inside out.

Biden isn’t in control. He tells the press he’s going to get in trouble if he talks about certain issues, and his wife leads him around on a leash. So Who is in control of the man’s faculties? Foreign enemies see this as well.

Biden didn’t legally win, therefore, neither did Kamala!!! We need to get Trump back in where he RIGHTFULLY belongs. If they can change the winner of the Kentucky Derby over shenanigans, then the President of the US should be more of a concern!!!!!! I’m just surprised that the OTHER countries don’t demand action, since OUR President affects their countries too!!

Basement biden is a stumbling, bumbling, blithering idiot. Total disgrace to America and the world.

Take out his whole cabinet.

I just want to let everyone know that there will be a judgment day on evil.
Hebrews 12:26 says: At the End of the age, God has warned that He will shake the earth and the heavens, that everything will be changed as a great shaking occurs. Every offensive thing that has not been established by God will be shaken loose and removed from its place. Every nation will be shaken…not one will escape this momentous shifting. All the evil that has been used against innocent people will be judged harshly.
When the final word is uttered by the last leaders on earth, God will still be in power.

The man has aphasia, the inability to come up with words. I have a funny feeling that his handlers have him on amphetamines since sometimes he’s “relatively” with it & other times just clueless & lost., “.Side effects of this drug are increased heart rate increased B.P. & with his history of strokes, he’s not a candidate for this drug “therapy”. He’s currently on “life support” since he can’t remember squat. The whole world is laughing at us & Australia wants him to resign.That won’t happen since he’d have to ask his handlers first. What a pathetic shell of a man, with limited brain capacity. He’s like a little kid!