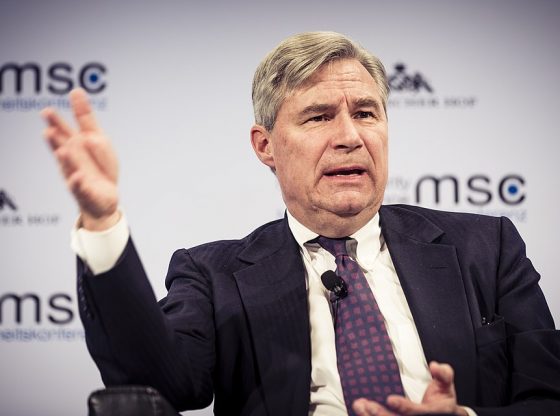 Democrats are experts at talking the talking then falling short of walking the walk. The latest hypocritical failure comes from Rhode Island Senator Sheldon Whitehouse, who despite delivering remarks after George Floyd and Breonna Taylor’s deaths slamming systemic racism as the root cause still remains a member of Bailey’s Beach Club, an elite all-white society.

In 2017, Senator Whitehouse first mentioned he hoped the exclusive club would “change a little bit” but it seems he’s done nothing to push them in that direction considering his wife is one of the majority shareholders.

On Friday, GoLocal caught up with Whitehouse again, this time asking, “Back in 2017, you had expressed concerns about the membership of the all-white Bailey’s Beach Club. You said that you hoped it would become more diverse. Now, your family’s been members; your wife is one of the largest shareholders. Has there been any traction in that? Are there any minority members of the club now?”

“I think the people who are running the place are still working on that, and I’m sorry it hasn’t happened yet,” Whitehouse replied.

GoLocal pressed, “Do you have concerns in 2021? Obviously, it’s been four years; you had remarks on the floor following the death of Breonna Taylor and George Floyd, saying, hoping to root out systemic racism in the country. Your thoughts on an elite, all-white, wealthy club, again, in this day and age: should these clubs continue to exist?”

“It’s a long tradition in Rhode Island and there are many of them,” Whitehouse replied. “I think we just need to work our way through the issues.”

Rewind to last year, when Whitehouse accused then-President Trump of stoking racial divisions in the country. It seems the only one creating a racial divide is Whitehouse.

This guy belongs to a ‘beach club’? He is scarier than hell! Uglier too!

I’m getting awfully sick of all this systemic racism, etc crap continually being thrown at us in these articles. I’m not racist and never have been. I don’t know one person in my inner circle that is racist. Maybe because we are all Christians. But I do know that if someone does have racist ideas, there is not much you can do about it. They just are that way and rarely ever change. And we should not be passing all kinds of laws that punish people if they don’t like a certain race. That is their right as long as they don’t act out on it. People will always have some kind of prejudice – if not race, it would be religion or something else. We have to quit letting the left brainwash and divide us.

They can’t help themselves, it’s all about them wanting to be in control whether they are right or wrong.

Typical progressive. Do as I say not as I do. Once again a democrat playing minorities as fools. Oh and yhey’ll still elect him.

They are too stupid to know any better.

Do as I say. Not as I do. How can anyone support the demoncrat party???

The Democratic way is to divide our nation….many of us have serviced our country, gone to school together, attend the same churches and been friends all our lives.
If the color of a person skin is the determining factor of how these elitetest leftist live then let them find a new country instead of destroying ours.

This guy might be the dumbest politician in DC and that is saying a lot.

Democrats forgive democrats of systemic racism. This sorry rat should be boiled in the oil he’s been heating for conservatives all his life. And Rhode Island? It should be merged with another state as one of its smaller counties. It won’t be missed.

ALL these demonicRATS ARE RACIST!

Another dumbocrap jackass, u mean, yes there are plenty of the hypocrites.

This Senator belongs to an only white beach club and calls out systemic racism. Hypocrites run rampant in the Democrat Party. Jim Crowe Club obviously.

Whitehouse is a sorry piece of racist S**T! Most or all of the Democrat politicians are really bad, but Whitehouse is the very worst!

Whitehouse. is the true meaning of being racist.

Known fact that the demonic democrats dictatorship liars rigged the election by coup against Americans. July 5-6 AMERICANS need to be in Philadelphia to set things right. These people should be tried as treasonous malicious acts against America 🇺🇸. SEMPER FIDELIS

Democrats only use the charge of racism to attack their political enemies. They do not apply this issue to themselves. Joe Biden was a segregationist Democrat for many years. Now all is forgotten.

The Demoncrats are two-faced from the word go. Yes, there is IS systemic racism in the US: whenever the Demoncrats rise to power, racism increases exponentially. They have always been the party of racism. And then the pot never fails to call the kettle black.

WHY do Rhode Islanders keep electing this joke of a Dem.? They should @ least elect someone who”s not another Biden.”If you don’t vote for me, you aint Black”. Augusta National, home of The Masters ,yrs. ago admitted Condoleeza Rice as a member, & the dues aren’t cheap @ this exclusive club.Good ole Sheldon should have his feet held to the fire on this one. What a 2 bit phony hypocrite.He’ll talk, but he’s never gonna “walk the walk
‘.