Jill Biden’s Office Accused of Being ‘Toxic’ and ‘Abusive’

Jill Biden’s Office Accused of Being ‘Toxic’ and ‘Abusive’ 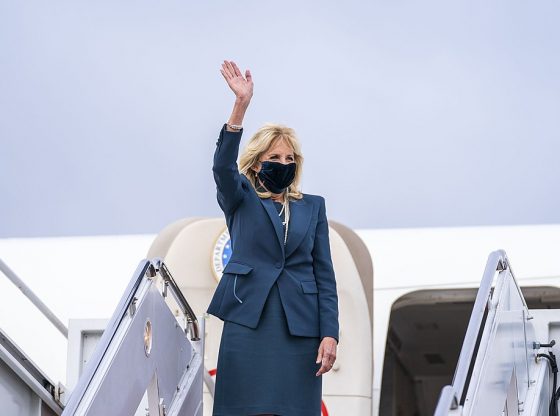 It seems that Kamala Harris isn’t the only toxic office in the White House. New reports claim the First Lady’s office also has a toxic work environment and abusive nature. Reports have surfaced about the allegedly abusive nature of the First Lady’s adviser Anthony Bernal who has been described as a tyrant within the office often insulting staffers behind their back sor driving them to tears within the office.

“[T]he way he has wielded that power has made Bernal one of the most polarizing people in the White House, according to interviews with more than two dozen White House staffers, former campaign aides, and people who worked with him during the Obama administration,” Politico reported.

In Bernal’s “pursuit of perfection” for FLOTUS, Politico said, the advisor has treated staffers poorly, so poorly that the atmosphere has been likened to the movie “The Devil Wears Prada.”

“Many described him as ‘berating’ and ‘toxic’ because of his unfiltered criticism of others and tendency to trash talk his colleagues behind their backs,” the report said. “Some compare him to [Meryl Streep’s] character in ‘Devil Wears Prada’ while another equated him to the ever-conspiring Littlefinger in ‘Game of Thrones.’”

Stories of Bernal making staffers cry are an open secret in the Biden world with seemingly everyone knowing someone who has been on the receiving end. Two former campaign staffers said they heard Bernal call people “stupid” in meetings or over the phone. During the campaign and in the White House, some staffers felt the behavior was so noxious that they began surreptitiously recording him in meetings, according to two officials who others confided in about recording him. West Wing Playbook has not heard the recordings. The First Lady’s office did not address the recordings in their comment.

Vice President Kamala Harris’s office has also been described as a toxic work environment with staffers and aides in constant fear of making the slightest mistake. The reports of abusive nature throughout the White House come after President Biden famously said he would not tolerate such behavior within his administration and staffers would immediately be fired, not only has he allowed it but he’s let it run rampant.

These fools have managed to teach the average “joe” (no pun intended) that order and discipline are things of the past, that everyone should be able to do whatever they please, whenever they please, and to whomever they please. Anything that doesn’t coincide with the “new morality” is apparently toxic. Good luck with that!

That’s why I left the Demonrat party in 2007 — their condescending attitudes to those working for them was brutal! Either I leave that as-hole party or end up making one of those pseudo males scream like a girl! Since I’m not big on violence (unless I’m provoked), I chose to leave and join the GOP, where people help each other and not “use” everyone! BEST MOVE I’VE EVER MADE!

Your comment is accurate but, you are missing the root. The Liberal insanity began with the Women’s Rights movement and it spread to anybody who wanted something. Women began modern liberalism and it will end only when women feel the repercussions of their insanity. Men tend to “roll with the punches” and are more tolerant. Joe is a puppet but, Kamala Harris is a dangerous Marxist who will hurt American women if she gets a chance. But, people deserve what they vote for–or think they voted for!

The whole kit and Kaboodle stink when it comes to governing…they have no skills!

Ha ha ha ha! When are democrats going to learn that their leaders don’t give a crap about them but only care about their own selves?? Are all DEMONRATS that dense to not see the as-holes they work for? WHY DO THEY LET THAT HAPPEN INSTEAD OF STANDING THEIR GROUND AND SHOVING BACK?

If anyone like that diktator Bernal ever approached me with his condescending attitude, he would be walking away on his knees screaming like a female! Men like that do not deserve any respect but a good swift kick to the groin area! Don’t worry, he probably doesn’t have much there to hurt anyone’s foot!

LiSTEN UP….The BLESSING of GOD is NOT with the BIDEN Administration. It is STI LL with PREZ TRUMP. TRUMP Shall Become a TRUMPET. From SamuraiQueen. 😄😄😄

Their communist, cough cough, I meant democraps, did these staffers really expect anything different….funny we never heard anything but praise and how nice The TRUMPS were, but the brain dead easily manipulated didn’t believe that.

The elites and the little guy. Democrat elites are so sure of their superiority they treat their servants and employees like cattle.Hillary had a reputation of a tyrant also. All one has to do is catch the Squad sounding off. Is that who we have to deal with in the future? Foulmouthed bad asses that think they are better than everyone else. Are there any nice civil women in the Democrat party?

ABSOLUTELY NOT! They are ALL sick and they deserve each other. It is time to get rid of these CANCERS including and not limited to the BIG IDIOT and his entire crew.

When I first saw Dr. Jill Biden I knew she was a WITCH from HELL.

So everyone. Grow some balls an file charges against all who treat you like crap. Don’t just talk about it. Action is the only thing to do. Fight back. Don’t like it. Do something!!!!!!! Stop crying

Trump is looking like a teddy bear about now, huh. HE knew what filth he was dealing with, though he gave them every possible chance.

What do you expect from a bunch if fricken’ Nazis?

Why are these people still working with this ignominious reprobate? All of ;them, simultaneously should quit. Bernel is a classless who; needs to; ;be fired ( no, it won’t happen).

Politicians will say and do whatever they might to get elected. Once in office, it’s rare to see any of them follow through. Trump was not a politician, said and did what he felt was necessary to meet his goals, and didn’t put up with too much crap from within. Lord knows he had plenty of crap to deal with from the outside…some of it self-created, but it didn’t prevent him for pushing forward with his goals.

Because they are ALL made of the same CLOTH. Disgusting POS all of them no exception

Hilarious!!!
All of these peons are democrats anyway….
Stick it to ‘em
lol lol lol

Birds of a feather, flock together

I wouldn’t put up with that nasty troll ever! She irritates everyone! In her debate with Pence, I wanted to reach in and bitch slap her she was so arrogant! She had the nerve to bash President Trump’s admin and say theirs would be better?! The phoney Biden admit is a stench in the nostrils of God! Biden and the rest have taken power that God has not given them and they will be prosecuted for sedition and treason!

Do more Jill& Harris for toxic workplaces DO more

She just wanted to get her butt in the White House. That’s why she pushed this lame brain husband into it. This is elder abuse. She should be arrested an put in jail.

I’m a TRUE believer in our Lord Jesus Christ. BUT understand that my eyes are going to be on OUR LORD Jesus Christ for the TRUTH WE CHRISTIAN LOVE our LORD JESUS CHRIST and ALL CHRISTIAN believers are praying for GODS love and blessings to continue to press forward with us lord