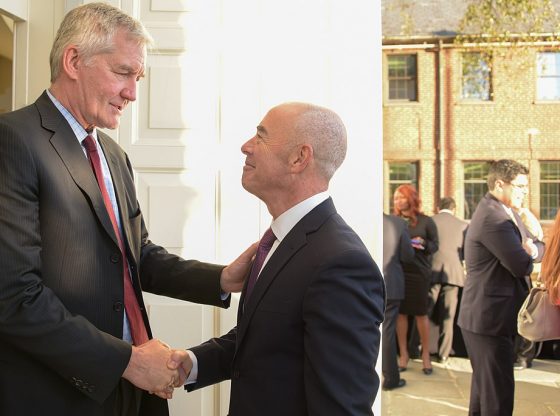 During a visit with Border Patrol agents, Homeland Security Secretary Alejandro Mayorkas made a grim assessment of the immigration situation.

Homeland Security Secretary Alejandro Mayorkas met privately with Border Patrol agents in Texas and said in leaked audio that the border crisis is “unsustainable” and “we’re going to lose” if “borders are the first line of defense.”

“A couple of days ago I was down in Mexico, and I said look, you know, if, if our borders are the first line of defense, we’re going to lose and this is unsustainable,” Mayorkas said Thursday, according to the audio obtained by Fox News’ Bill Melugin through a Border Patrol source. “We can’t continue like this, our people in the field cant continue and our system isn’t built for it.”

Mayorkas told the agents that the current border situation “cannot continue.” He said the federal government’s system was not designed to handle such an influx of migrants as the U.S. has seen in recent months and he was “very well” aware that the sector recently came close to “breaking.”

“It’s our responsibility to make sure that that never happens again,” he said.

Mayorkas did say that the agency’s ability to meet the challenge is still strong.

Homeland Security Secretary Alejandro Mayorkas is almost as big a dumb-ass as Dementia Joe Biden. The USA is in a world of trouble with these morons in charge.

What’s the answer for it, Casey?

How about build the wall , go back to Trump policies that were working.

Federal Judge ruled the Bribem Admin is to reinstate the Remain in Mexico policy.

Bribem….that’s one I hadn’t heard. Love it.

You know the answer to that. Build the damn wall and put Trump’s policies about waiting in Mexico for immigration approval. All common-sense principles.

What a da question!

Then Mayorkas tell that MINDLESS BRAIN-DEAD EMPTY-HEADED SWAMP-DWELLING BOTTOM-FEEDING SCUMSUCKING HYPOCRITIC GUN-GRABBING BABY-KILLING AMERICAN-HATING ANTI-CHRISTIAN ANTI-SEMITIC MORONIC IDIOTIC LYING THIEVING ELECTION STEALING TRAITOROUS GLOBALISTIC COMMUNISTIC SOCIALISTIC DIRTBAG boss of yours FINISH BUILDING THE FUCKING WALL!!! That he stopped,as well as reinstall the rest of President Trump’s border policies!! And round up all the ILLEGAL IMMIGRANTS he let into the country as well as all the WUHAN VIRUS INFECTED ILLEGAL IMMIGRANTS and SEND them BACK to the COUNTRIES where they came FROM

So you ass holes that created this mess needs to StOP it. Build president Trumps wall. Send them all back. All of them. Now

Where were you guys when the vote was taking place in November. Don’t blame Biden, we knew what we were getting. Blame the voters that we never seem to hear from. Biden voters where are you?????

LISTEN UP…The DEMOCRATS are Doing NOTHING to Make THINGS BETTER. LAND of the FREE and HOME of the BRAVE is Being DESTROYED Before OUR Very EYES. THERE is CHAOS Everywhere. The PANDORAS BOX Has Been OPENED. ALL HELL has BROKEN LOOSE. THERE was a REASON AMERICA’S FOREFATHERS Put GOD First. From SamuraiQueen. 😩😩😩

The dum A love to creat havoc . You think open boarders are a problem just wait to see what they are really doing. It’s got to be 100 times worse

It’s your responsibility to round up every single one of these foreign criminals and get them out of our country!

Did you not read Biden’s executive orders?1. One guaranteed and called for safe passage thru other countries to the US (he invited them). 2. he said the 40 million non resident migrants could not be bothered rounded up or sent back (notice they no it is 40 million not the 20 they say). 3. He signed and order to register as many people as possible (but we all know he was talking about illegals who we can’t do anything to). Look up on google his 39 executive orders, most are against the constitution.

This is what you can expect when you allow your determined enemies to rule your nation.

Given the deleterious facts on the border this sound like Mayorkas ir preparing to completely open u the border as resistance is futile and the Agencies ability to meet the challenge…the challenge being “to dissolve the border” is strong.
No one thought lac luster Mayorkas was inspiring, nor a man with a plan other than bowing to Biden.

cactusbob
Reply to  D A MacKAY

Idiot Mayorkas has been telling the world that the border is closed, so how can there be a border problem? He’s a Democrat, so he must have been telling lies!

When TRUMP was POTUS America was GREAT and also the world was GREAT.

When TRUMP was POTUS America was GREAT and also the world was GREAT.

At this point joke hit ler is even more fascist than Mussolini..

Well, at least Mayorkas took the initiative and the trouble to go to the border, not like Giggles, who went to a town within 20 miles of the border for a photo op.

When did she even get 20 miles from border. Unless recently as she was 800 miles from border only like a month or 2 when she actually went to Texas. She was so far away as to try and cover up the DEMS/LEFTISTS hidden agenda! They think Republicans like myself and the American people are dumb! They are so wrong but some citizens are still so ignorant and dumb it is pathetic! There should be a poll as it should be 100% against Biden not 50% or whatever the actual number is. Who are these idiots? Corrupt people and humans so blind to the truth it is appalling sadly. The border is a disgrace and Joe and Kamala and Pelosi Obama etc should be in jail for their crimes against humanity and the safety and health of USA citizens letting in criminals with Covid is even worse. Drug dealers murderers and rapists sex traffickers and the drug cartel are treated well by the Biden administration meanwhile cops and citizens are treated poorly. It is a real shame! We need Trump or Desantis as PREZ asap!

it’s commie joe fauci’s virus being sent in with them . another way to kill Americans because the communist don’t like Americans . and any one sending there kids to school pushing CRT . DONT CARE ABOUT CHILDRENS LIVES !!! AND IT IS WAY PAST TIME FOR The revolution to start and run these communist out of our country. they need to leave by the way our ansistors and family members got rid of them . the right way .

What?! Isn’t this a 180• from his previous lack of giving a darn? I’m shocked to hear him admitting this but then it was only a few days ago some Republican leaders were calling for him to be impeached. Hhhmmmm

UNLESS the federal election laws are passed. If they are, all the fraudulent methods used in 2020 will be required by law, and we will become like Venezuela.

I’LL LIE, THE REST OF YOU SWEAR TO IT, COMMUNIST, SOCIALST MAYORKAS TRIP TO THE BORDER, ON THE BACK OF THE TAX PAYOR, TO GENERATE MORE LIES, THIS PERSON SWORE AN OATH OF OFFICE TO PROTECT AND SERVE, FROM DOMESTIC AND FOREIGN THREATS, THIS PERSON IS A TRAITOR TO THE UNITED STATES, SHOULD BE SUBJECT TO FORMAL CHARGES. FAILURE TO COMPLETE HIS SWORN DUTIES.THE INTERNTIONAL SPREAD OF VIRUS AGAINST AMERICAN CITIZENS IS A CRIMINAL ACT, TREAT IT ACCORDINGLY,HIS DISREGARD FOR THE LAWS AND LIVES OF OUR PEOPLE IS AN CRIME.THIS MAN IS A TRAITOR.

Trump was right on the money with his border policies, the border was more secure than at any time in the past. Trump had help from Mexico, patrolling on their side of the border, Biden, out of the lefts hate for anything Trump, shut down trump policy and threw open the flood gates, the same reason Biden shut down Keystone and a whole lot of other policies It’s Biden who needs to be cancelled, he is an imbecile along with his sidekick giggles.

IT’S A NO BRAINER…..PUT THE TRUMP POLICIES BACK IN PLACE AND DO IT FAST. A FEDERAL JUDGE JUST ORDER THE FOOKED UP BIDEN ADMIN TO REINSTATE THE “REMAIN IN MEXICO” ORDER THAT TRUMP PUT IN PLACE. ENOUGH IS ENOUGY WITH BIDEN’S ADMINISTRATION…..IT HAS BEEN THE MOST FOOKED UP ADMINISTRATION IN HISTORY AND ITS NOT EVEN A YEAR OLD……GOD PLEASE HELP GET RID OF THESE MANIAC’S

After telling lies for many months, did Mayorkas just wake up and smell the coffee? He is as blindly dedicated to the Democrat treason as anyone could be, but maybe some hint of character is starting to show. But I doubt it.

Another example of the concerted effort by this administration to take down America as we once knew it ! I believe nothing positive will happen, and either by attrition or intent to change current conditions . . . if they make a feigned effort . . . it will only be Kabuki Theatre, to cover their butts ! Meanwhile, the illegal migrant count will eclipse $2 million. Thanks (uninformed lemming) Americans ! You gave us this failed politician to play president.

The only way to stop the border invaison of disease carrying illegals is to change the leadership of this nation.
Trump had it under control even if he did not send them all back.
The corrupt Establishment Elite are doing all they can to destroy America and the rest of the free world so they can usher in the AntiChrist and NWO.

DemOrats plan to destroy America from within. Communist Russia’s game plan stated that they would never invade they would destroy from within by gaining control of 1 of the 2 parties and the media and they have SO WAKE UP