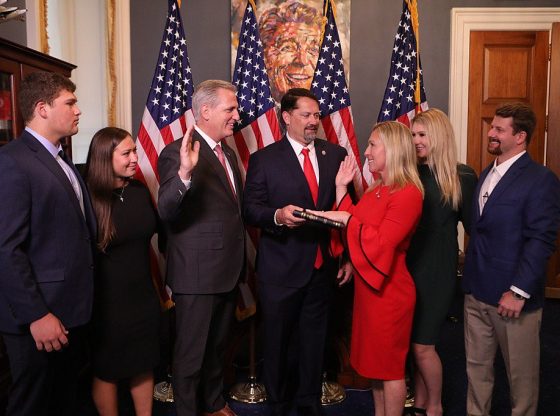 It was an honor to be sworn into the 117th Congress yesterday. I’m ready to FIGHT for the people of Northwest Georgia! via Office of Marjorie Taylor Greene
| By: TTN Staff| Media,Military,NEWS,Politics | 16311 | 76 comments
Advertisement
Help This Conservative Icon DESTROY Gavin Newsom [TAKE ACTION]

Joe Biden’s Afghanistan withdrawal caused Representative Marjorie Taylor Greene (R-Ga) to launch an expletive at him. Most of you will likely agree.

Marjorie Taylor Greene called President Joe Biden “a piece of shit” in a video she posted on the far-right Twitter alternative, Gettr.

The video, which was not posted to Greene’s other social media accounts, such as Facebook, Twitter or even Telegram, shows the Republican lawmaker in what appears to be a gym, possibly fresh off one of the weights sessions that she loves to boast about.

“Joe Biden, you are not a president, you are a piece of shit,” Greene says, before adding: “Thousands of Americans are stuck over there in Afghanistan and you are letting the Taliban kick your ass, while you are lecturing governors about masks and vaccines. Do your job, bring these Americans home.”

Greene, one of just 16 GOP lawmakers who last month voted against increasing the number of visas for Afghans who helped U.S. troops, posted the video on Gettr, a site operated by Jason Miller, a former aide to former president Donald Trump. Gettr has failed to gain much attention in the month since it launched and analysis this week shows its growth has already stalled.

Greene has been the left’s boogeyman for some time now and they keep giving her the spotlight.