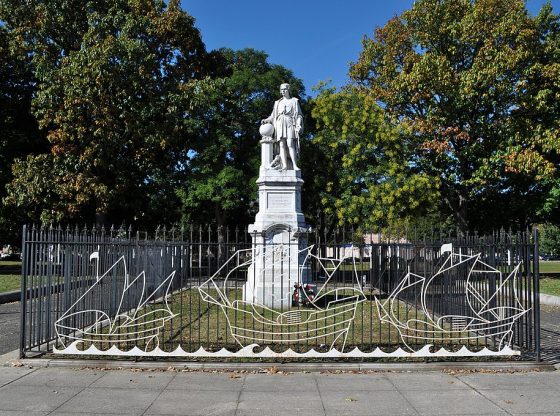 A Philadelphia, PA judge ruled that a Christopher Columbus statue may remain in place after city officials pushed to have it removed. Judge Paula Patrick said that the push to remove the statue had no legal basis and lacked sufficient evidence.

According to reports from The Washington Examiner:

“It is baffling to this court as to how the City of Philadelphia wants to remove the Statue without any legal basis,” she wrote in her decision. “The city’s entire argument and case is devoid of any legal foundation.”

The city’s Board of License and Inspection Review had initially upheld a July 2020 decision by the Philadelphia Historical Commission to remove the statue.

However, the city did not provide an adequate opportunity for the public to weigh in on the statue’s future, Patrick said.

“While we are very disappointed with the ruling, we’re reviewing it now and exploring all potential options — including a possible appeal,” said a spokesperson for Mayor Jim Kenney. “The statue remains in Marconi Plaza and will continue to be secured in its existing box.”

Check Out The Companies Hurting…

These Republicans Want The Government…

THANK YOU JUDGE .GOD BLESS YOU .

Translating this decision, destruction of historical monuments, statues, plaques, street names, etc., makes no sense. Further, it seems only leftists are offended by old icons and symbols popularized in some long past period. Leftist vandals are too ignorant to know that destruction of monuments and symbols magnifies the fame and prestige of the historical events they represent. They probably don’t know this because their reading habits are insufficient and their education is limited.

Erasing them is much like burning books that contain material they don’t like but leaving those they don’t know about.  Ample evidence proves the fact that Africans were already in the new world long before Columbus arrived. Narcotics only known to be derived from American plants recently were discovered in ancient Egyptian mummies. They suggest that such compounds reached Africa thousands of years before Christopher’s four little trips. Seems his trips just got more publicity.

Confederate monuments rile democrats fiercely. But democrat rioters miss the fact that the GOP opposed slavery and such monuments have no attachment to them. Republicans usually defend American iconography even if it represents unpleasant times or tragic events. Destruction is stupid. For example, remnants of 1770 King George III (bad) and William Pitt (good) statues, still exist in New York. Both were torn down in 1776. Most would like to see them since they’re part of American history.

Thank you judge for standing up to preserving our history, whether good or bad

Just curious. What god dam idiot thought this would be a good idea I say. Put ALL statues back to where they belong. Don’t like them. MOVE. I hear afganastan will have plenty of places to live after all the people get flown out

Elsin – I agree with your post, but using God in a curse isn’t necessary. Have a good day.

Let’s replace it with a statue of George Floyd shoving a pistol in a pregnant woman’s stomach. That’s a true 21st century hero, at least to morons who hate history!

Communists always try to erase the culture and history of the society that they are attempting to destroy and takeover. It is one of their primary policies and strategies.

Terrorist and tyrant dictators always destroy statues, literary works, and previous history as they prepare for their sociopathic dictatorships.

The Democrat left with their hatred of the Constitution, Democracy and the poisonous and wildly inaccurate lies about the U.S. make it clear that their agenda is a military dictatorship.

Regular and decent Democrats must think carefully about enabling such a catastrophe.

What is the big idea of taking down HISTORY? They were there before we were born and they should be left there after we are gone. These statues are not POLITICS, they are HISTORY, of course many of you who want the statues taken down don’t even know what they stand for because you can’t read. What MONKEY SEE, MONKEY DO. Imitate DC on how they destroy all of those beautiful statues? NO. Be sensible and have COMMON sense.

Fed Up With the Sell-Out

Trashing existing national symbols is one of the tactics employed by COMMUNISTS all over the world during a take-over.

They want Columbus and the Pilgrims gone but are erecting statues and murals of a career drug-abusing criminal and giving him a special day. That should say something about what the Democrat Party is all about. Destroy the police, empower the criminals.

Mayor Jim Kenney sounds like a twit in his desire to remove a statue.

Tell me, Mayor, what will the removal of a statue do for you? NOTHING!!! You ignorant Leftists think with emotion and not common sense.

Quit your job and go find a REAL JOB. Maybe then you will understand that America isn’t about feel-good policies and rewriting history, but rather freedom!!

Those who have destroyed our statues and monuments should be left in Afghanistan. No statues there to deal with – should be a great life for them.