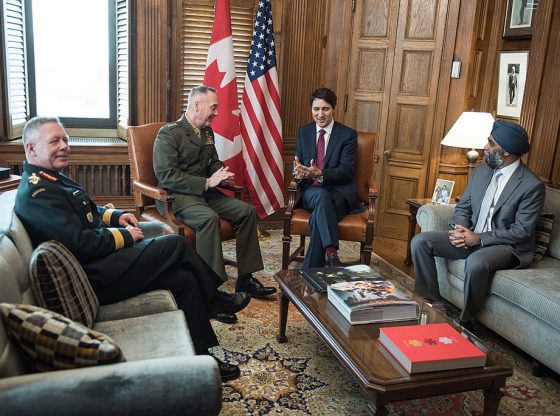 TORONTO — Hours after Prime Minister Justin Trudeau vowed that he wouldn’t back down in the face of the “anti-vaxxer mobs,” protesters — many of them opposed to coronavirus vaccinations and public health measures — threw gravel at him at a campaign stop on Monday evening.

The incident occurred while Trudeau was boarding his campaign bus after an event at a brewery in London, Ontario, a city some 120 miles southwest of Toronto. Videos posted to social media of the episode show protesters throwing gravel in the direction of the prime minister and some of the reporters traveling with him. Trudeau turned toward the direction the gravel was coming from and boarded the bus.

Speaking to reporters on a Liberal campaign plane, Trudeau said that some of the projectiles “might have” hit his shoulder, comparing it to when a woman threw pumpkin seeds at him in 2016.

“There was little bits of gravel,” he told reporters, seeking to dismiss the incident. “It’s no big deal.”

Last month Justin Trudeau called a federal election for September 20th betting on his handling of the economy and the coronavirus will help him keep power.

He’s even gayer than Obama.

Nothing to say make it gay.

You should know all about gay stuff.

How would you know that?

I’m so sick of seeing Obumturds picture on here.

Black is not beautiful.
If you are White.

I dream of being the white middle of the Oreo cookie between Big Mike and the Magic Mulatto! 🤭

I think he is positively dreamy! 😍

Wow does he really think people like him??
He is as bad as they come!

I don’t know about that but he’s certainly a stereotypical libtard!

Yes they have elected him twice now.
By very clear margins
But like Biden of course he cheated.

Naw, I don’t think he is the most disliked elected official, that tile goes to either obama or biden.

Were the rock throwers arrested like the Trump Thugs at the Capitol.
Why are Conservatives so violent?

u know
Reply to  Albert Hess

Violent conservatives, guess your blind to the goings on in Portland the last year or two. Oh that’s right, they are peacefu Libertards just having peaceful little protest marches….burning a police station, trying to burn down a Federal court house SEVERAL times, peaceful little cusses huh.

Albert Hess
Reply to  u know

Should the people who threw rocks at Trudeau be arrested?
There have been 247 arrests, 142 charged, and 38 guilty findings in Portland.
Inclination to violence is a human trait, Conservative and Liberal.
If you want to see Conservative violence look at the Jan. 6 videos.
.
Which is worse burning a police station or a cop watching the life drain out of a man’s face because of where the cop had his knee for 9 minutes and 40 seconds.
Actions have consequences.
The consequences of Derrick Chavin and his co- thugs actions was the burning of a small cop shop.
BFD.

cashgirl
Reply to  u know

Little Al is what I refer to as “willfully blind” — has no interest in knowing the truth. Like most liberals, of course. 🙁

The truth is Trump is no longer the President.
Because Joe is a cheater.
Only the weak get cheated.

Only the weak have to cheat to win, like OBiden!

Another total loser like hidenbiden, they just don’t get any worse.

I hope they were BIG rocks.

I hope they were arrested for being violent thugs.

All liberals running for office, your fate is in the hands of the voters meaning your anti freedom of choice campaigns appear to be doomed.

Is that Trump is living in New Jersey?

Al the ass is on board.
Please don’t engage, or even bother to read his posts. Nothing but garbage.

I am just hear to sniff yours.

Yeah your ears smell the same..

You’re absolutely right, of course — we shouldn’t even acknowledge his juvenile taunts!! But as annoying as he is and wrong, of course, he’s kind of fun to play with once in a while. 🙂

Hahaha, yes. He must of been kicked off all other sites. Comes here to annoy.
Best to ignore. I don’t even bother with thumbs down.

He is not wrong.
Trump is not the President because Biden cheated.
Weak people get cheated.

Clearly, they should have used larger rocks and more of them. Might have gotten his attention.

They should have thown a fire extinguisher at him Trump Thug style.

It’s going to get worse until the law is returned to our land.The democrats are going to far again, there is a lot of valid reasons, not to get the shots, including other virus preventative/treatments etc, Don’t believe a word these democrats are saying now, besides their incompentence and lying, things have goten too political. Biden is just a paid liar, along with most of his team, our government can’t continue much longer with these clowns in office. What monies are the democrats receiving from the phamaceutical industry, to keep this plandemic ongoing? “Methodist Health System says they cannot violate federal and state law and deny employees’ religious exemptions to inject a drug into their body. Irrational democrat mandates have now become national crisis in themself. Democrats can’t govern, spend and tax spend and tax with no resolve.

Of the COVID-19 deaths this week what percent were unvaccinated?
I know of six Right Wing Radio Talk Show Host’s who will no longer be polluting the airwaves with their antivax crap.
My heart goes out to their vacinated family members, they did what they could.
The unvaccinated got what they deserved.
With any luck they will get COVID-19 too and die horrible deaths too.

You can tell you are a Libtard because you don’t care.

maybe the same fate will fall to you

You are a liberal with that ugly mouth of yours! May your hatefulness come right back to you big time !

ditto… i have zero patience for libtard dumbocrats…. the illegals are running around the country spreading covid and the sickos are blaming patriots… go figure!

It was no big deal because it was just gravel and didn’t harm him, but it certainly shows how hated he is as a leader!

No one would ever throw anything at Trump.
We all love him so.

Al, you got something right !

NO they would not. Biden got roasted at several college football games with the YELL of “F…K Joe Biden” and they were happy to do it. Biden also went see the damage the storm did and was welcomed with sneers.

poor old crooked joe… why doesn’t he retire before he forgets he has a job to do! or he is thrown in jail for kissing china’s ASS and taking bribes!

Even a blind hog roots up an acorn now and then.

It’s time for all people to WAKE UP! This is called the Great Awakening for a reason. Most people are asleep or in a coma when it comes to their rights. We have been enslaved since the days of Adam and Eve. It’s time to overthrow our corrupt leaders and charge them with crimes against humanity. It’s time to free people across the planet. It’s time for Enlightenment and justice for all people of all colors on all continents. Let’s Roll !!!

next time make it lead!

Do the same with Trump.
See his brains explode through his orange comb over.

Yes, unlike OBuden, Trump has brains.

Drop dead nutcase ! You must have escaped from the looney bin! You need to be taken away in a straight jacket where you escaped from!

Just roll over him. after a while you don’t even see the attention hungry jerk.

How many votes did Trudeau steal?

He didnt need to, he won the legitimate votes by millions.

Any Canadian who votes for the retarded spawn of evil Paul
Trudeau deserves the title “Nut Job” I fled from the coming insanity in Canada in 1949. Unfortunately the insanity seems to have spread crossed the border. No where to go from here. ,

I don’t think I would be so confident as he is trying to sound. He’s in trouble and I believe about to get replaced. And he needs to be put to pasture.

I just love violence.
I don’t care who get hurts.

Hopefully it will be you!

Whether one loves or hates Trudeau, the behaviour shown by those who were throwing rocks at him was unacceptable! These people should all be ashamed of themselves and a jail sentence wouldn’t be out of order!

I understand the rocks were really a hand full of pebbles that grew in size when the media watered them.

Will Trump celebrate 9/11 by releasing more Taliban fighters from Gitmo?

That was Obama idiot! Is your brains missing?

WTF. hussein O did the gitmo releases… always throwing the liberal shit at trump but us patriots know the truth! just look on hunter bidens laptop if you can find it….

couldn’t happen to a nicer guy

just like in the US, voting has severe consequences….for example, in Chicago, Seattle, Portland, NYC it comes down to life and death….

Trudeau: next time it many NOT be just “gravel”!