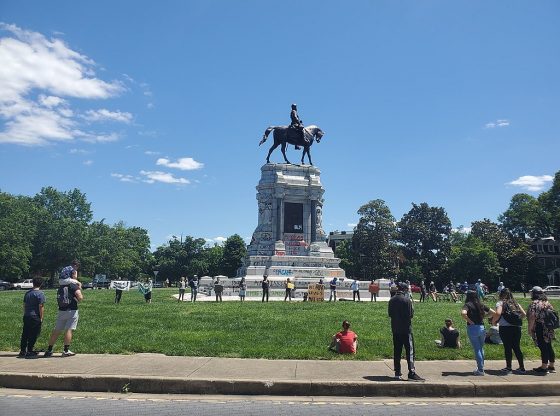 On Wednesday, the largest statue in the country honoring a Confederate soldier was taken down. In Virginia, a statue honoring Confederate General Robert E. Lee standing over six stories tall.

Governor Ralph Northan (D-VA) called for its removal last year, saying that we could “no longer honor a system that was based on the buying and selling of enslaved people,” according to Axios.

The governor’s move prompted a legal challenge that remained unresolved for more than a year. However, last week, the Supreme Court of Virginia ruled that the commonwealth could, in fact, remove the statue and that the government was not obligated to keep it up, even if the deed for the monument called for it to be kept up for display in perpetuity.

“Those restrictive covenants are unenforceable as contrary to public policy and for being unreasonable because their effect is to compel … the Commonwealth to express, in perpetuity, a message with which it now disagrees,” the justices wrote in a unanimous ruling, notes The Associated Press.

156 years after the end of the civil war, Virginia has come one step closer to being a more inclusive and welcoming Commonwealth. pic.twitter.com/7wvRfM35mx

Cancel culture is disgusting. The time will come for them to taste it for themselves.

Taliban mentality – Lee was a great General on the wrong side of history. The statue hardly represents slavery. Had he been a union general, it still would be standing.
To be woke is not a joke.

He WAS an Union officer, a COL, before he was a Confederate GEN, former Commandant of West Point, & sought by Lincoln to lead the Army, but VA held his heart & home.

More proof that 90% of those who identify as liberal, socialist, progressive, leftist democrats whether politicians or plain citizens are shy 99% of their cognitive abilities, since they cannot recognize that inanimate objects themselves do not stand for anything other than past history. It is disturbing that there are do many people in the US who seem to believe these inanimate objects actually pertain to attitudes and beliefs in todays society, it is sadly a sign of the overall ignorance of the US citizenry that this kind of thing is taking place in our nation. It’s a harbinger of the fact that in the not so distant future the USA will be a full fledged socialist country ruled by individuals who ate Nazi’s at heart !!!

I am offended by statues and street and school names of Martin Luther King, now proven to have plagiarized his doctoral thesis, his “Dream” speech, and was well documented as a serial adulterer. Lying was as common as breathing to the man. Like lee, he accomplished good as well, but since we’re judging strictly by one’s perceived mistakes these days, King’s memorials have GOT to GO too. Let’s clean it ALL up!

You are absolutely correct my friend Robert E. Lee was against slavery he was a great leader in the Civil War tired of Martin Luther King everything in Roanoke Virginia where im from hes everywhere on everything hes got to go all of his statues The South Will Rise Again!

While we’re at it, Northam has got to go. Not only did he attend parties in blackface with his date in KKK robes and hood, but his proud college nickname was “coon man” which is racist and offensive, as is he! He’s GOT to GO too. Let’s erase him also!

another step in the wrong direction again, do they really think if you take down a statue everything else is just forgotten. right in the footsteps of all the other facist dictators took try to erase history. if only we could erase them as a person of no real value to the world, ah wouldn’t that be nice?

For every Confederate statue taken down 10,000 people join or lean towards supporting the KKK and right wing politics. Actions have consequences!

Ironic isn’t it. Historically, the largest Confederate monument will be remembered as the one destroyed by a governor whose nickname is “coonman” for wearing blackface in his college years. He’s not smart enough to know that removal of this monument will magnify the fame and prestige intended.

Funny the history is still the same didn’t change a thing.

The history is more gov’t lies. The civil war was fought because the Northern gov’t was over taxing the Southern farmers, not slavery. Lincoln owned slaves. But you have to dig to find it and it will not be in school history books.

Sad The destruction of history. The statue was part of the healing process for a once divided nation contrary to today as many try to divide this nation by doing such things as tearing down statues.

Our southern border is awash with unknown peoples breaking into our country, Americans are hostages in Afghanistan, the economy is in shambles, we have enabled a new state for terrorists and armed them, our government is in the hands of those who hate us and our country, our elections have been corrupted, the populous has been terrorized by the medical community and those who would propose that armagedon is at hand from co2, masked fascists riot and burn our cities which are have been taken over by the homeless living on the streets in the thousands, while our cities are riddled with crime so prevalent that we no longer even attempt to enforce our laws while our “leaders” feign compassion and they give our tax dollars to themselves and their friends. Yeah, statues are a BIG problem?!

pretty much sums it up.

Those who ignore the past are doomed to repeat it but I guess the governor of Virginia and his partner are not smart enough to realize that truism.

How sad. Too bad the country can’t be more inclusive.

If the land was given for the monument and it says that the statue must stay up then the state needs to return the land and the action is one of contractual law. Shows how the liberals of Virginia don’t respect the rule of law. Time to dump the Supreme Court of VIRGINIA !!!!!!!!! It is important not to give honor to these things it is more important to keep them and teach everyone how wrong these people are if u remove them then they disappear and the wrong they did is forgotten!!!!!’

By removing these statures of historic figures associated with the Civil War from the Confederacy is destroying history. They should be shamed of themselves.

It is history. You can’t change history by taking down a statue. You are suppose to see these statues an think. How far we have come.

The country’s largest Democrats statue comes down.
Remember they fought to the death to keep their slaves.
Now they want to enslave 95 percent of the population with Marxist dictatorship.

Sad, indeed… but then, I doubt Robert E would want to continue to grace a capitol that stands in vile opposition to every principle for which he stood all his life.

Why not teach REAL HISTORY and the reasoning at the time… Today’s indoctrinated population are warped, because the teaching was not understood, and they are reacting incorrectly… Taking down a statue is insane… not going to change anything that happened 200/300 years ago … Just plane fn stupid…

Bunch of morons who believe that you can cancel out history by removing statues. I guess their next move will be the same as Hitler who had the philosophy that burning books would cancel out history also. Here is a quote to ponder on A hundred years before the advent of Hitler, the German-Jewish poet, Heinrich Heine, had declared: “Wherever books are burned, human beings are destined to be burned too.” Guess this man had some foresight as what was top come. Maybe should learn from history and not to to cancel it out.

It’s okay to take down a statue of a man of character despite what was common and accepted in his day and era. But it’s okay to erect a bronze statue of George (St George) Floyd in Newark NJ and to see his face pasted on murals all over. We disrespect a great and accomplished man not withstanding his misguided loyalty to his state, and we honor a felon. Is America going down the tubes, or what?

TrumpTrainNews. Can not be of President Trump who is against such oppressors of free speech. Trump is against any all all such Fascist folks, like you, as to why you should have the say on what is ok or what is not ok to say. Your allowing my comment is of no concern to me. I can always drop your site at my option. Free speech is a bed rock of our nation so take your approval and put it where the sun does not shine.

Jackals feeding off a dead lion.

Only the most ingenuine person fully lacking in integrity can stand around with a grin while a monument such as this is being torn down, speaking the words “…we must do more than talk about the future.” Destroying historical references of the past is not doing more about the future. Tearing down is about all these people know how to do. Talk is cheap. Keep your powder dry.