In a shocking turn of events, two hosts of “The View” tested positive for Coronavirus live on air. Host Ana Navarro and Sunny Hostin received the news shortly before they were set to interview Vice President Kamala Harris and were forced to quickly leave the studio.

Ana Navarro and Sunny Hostin were on the program to start the show with fellow hosts Joy Behar and Sara Haines, but as the show returned from its first commercial break, they were asked to leave by a producer. A bewildered Behar admitted she didn’t realize what was going on, and she was stopped from introducing Harris mid-sentence as her co-hosts left the stage.

After another commercial break, Behar explained Hostin and Navarro had received positive COVID tests and would not return. That delayed the Harris interview, which was supposed to take up the majority of the program. The interview didn’t start until there were only 10 minutes remaining in the hour.

In one of the more awkward moments in recent live television history, Behar and Haines asked the audience to participate and ask them questions, as the show worked to set up a video feed for Harris to do the interview backstage instead of coming in front of the audience. That went on for several blocks as the hosts worked to kill time.

Asked what moments in her lengthy television career stood out, Behar said “this one.”

Surely this cannot be true! didn’t our “woke warriors” get their shots and wear their flame-retardant masks? How about JoyLESS Behar? Let’s hope they pass it on; after all, liberals are generous!

They wont die from it.
TrumpHumpers will.

Socialists push the lying propaganda on their liberal counterparts who don’t have ears to hear with or eyes to see the truth….Fatal errors for the vaccinated. Just keep changing and weakening the immune system right.

No one would miss Sunny or Anna or any other leftist who dies from COVID. Trump supporters are much smarter than leftists. They’re not falling for the COVID mass hysteria. COVID vaccines and masks do nothing to prevent a person from getting COVID. Smart conservatives know that.

Sad, we will never know those awesome questions they were going to ask

Such a classy group of broads. 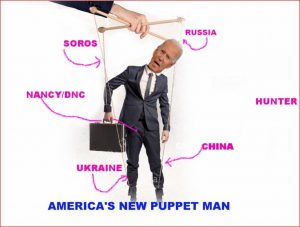 Putin has already wiped his butt with the foolish, falling down stairs, dementia, hiding in his basement, Beijing Biden. You should join him.

Why do you watch them?

YOU are a disgusting pile of garbage, with a filthy mouth and a filthy mind.

Get over it.
It is just Trump style locker room talk, you know, grab them by the twat, just be careful of the MAGAots.
We had a filthy pile of garbage for President.
XpresidentRump

You’re a pathetic case for a man Alice. Obviously you’ve never been in a lockerroom, unless you’re a pedophile like all you woke liberals, who were frequent flyers to whore island. Clinton, Gates, DeNiro, Prince Sweaty, & countless others. Put your dress on, it’s easier for you when you sit to pee.
And as for a real misogynist, Hunter married his brothers widow, cheated on her with a stripper, denied it, proven wrong, got her pregnant, denied it, proven wrong. Or the other sex & crack head video, shall we talk about that? You clowns have no ammunition for 1, for 2, you’re ALL MISERABLE!

Albert, you don’t know the definition of class. You’re just a leftist “twat”.

Gee I thought they were ALL VACCINATED😅😅😅

Probably were. Vaccinated doesn’t mean you won’t get Covid. A postal worker at our local Post Office was sick yesterday and didn’t show to work. He was fully vaxed.

All that damn Biden vax does it keep you from getting dead.

It’s a farce. Many vaxxed are getting covid. Some doctors are saying the vaccine is the delta variant.

BCH is so clever.
As clever as middle school punk.

What a dog and pony show! Who even listens to these clowns?
Vet

So that is the argument of many who do not want to be forced to get them. If they do not work – why the enforcement? We are shipping billions of them out of the country – what is the cost of all of this propaganda?

The vaccines do work.
Unfortunately they are not perfect.
Like Trump.

Little obsessed are you?

That is what the the un-vaccinated are screaming in the ICUs.

so…apparently the ‘woke left’ has defected…they didn’t get their vaccines??! don’t worry about not giving harris much time…she doesn’t say or do much that is relevant anyway…it was the same in california, unless you consider letting out dangerous criminal from their jail/prison sentences and then throw the book at those with petty crimes. pretty sad

I know of several people who do not have the vaccine, have gotten COVID, and are fine. The “COVID vaccine saves lives” narrative is a lie. There have been many thousands of people who have died from the vaccine. So, Albert, nobody cares if you get it. However, I have done fine for the past 2 years without a vaccine. So, I think I’ll remain unvaccinated.

I don’t know if this incident supports or denies the need for jab #3, the booster if you will. My wife and I dutifully accepted our doctor’s advice and when available, lined up for the first two vaccinations. Subsequently, our doctor reasserted his advice to take the booster. Nobody has the facts. We’re waffling.

No one has all the facts.
We will know all the facts in a few years.
In the mean time smart people are taking the vax.
The stupid are dying like flies.
At a cost of over $100,000 a piece.

You are such a liar Albert. I work in healthcare, and many healthcare professionals are not getting the vaccine because they know that the vaccines are not safe, and they do nothing to protect a person from getting COVID or from dying from COVID. The smart people know that it is better to focus on protecting your immune system from any virus like COVID or the flu. Good luck taking that vaccine and getting blood clots, heart inflammation, or cancer. There have been documented cases of all three of those conditions from the vaccine. I have gone for 2 years without the vaccine, and have been fine. However, I could care less if folks like you want to take your chances to get it. Stop with the propaganda on this site. Nobody is listening to you.

Gee wonder why the vaccines do not work for the loud-mouth Kamel Harris? maybe the evil B+++h will kick the bucket and do America a favor just like the Democrats was hoping would happen to Trump

They do work for Harris.
She is not in hospital.

Remember when President Trump got COVID and recovered within a matter of a few days? Yes, I remember.

They call the unvaccinated morons for chance of getting and spreading corona virus. Now see them trying to squirm out of this one.They will probably blame it on President Trump. They are idiots.

Maybe you should get the 3rd and 4th Booster then….see how you do. Keep falling for the government standard lines told over and over.

I will follow the FDA guidelines.
I will not die of Covid.

The reason for locking people down is the Hoax….The Real goal is for the Deep state to destroy the Economy and open wide the gates of hell on the borders.

Where are the Deep State headquarters?
In the deep reaches of your mind?
.
The borders need to be thrown wide open.
My cities’ economy is crashing due to lack of people willing to take physically hard/smelly/demeaning /low paying jobs.
My kids won’t.
Will yours?

No problem for me I don’t watch Fox anymore. I supported them for years but that’s over forever.The almighty buck and fear of the left compromised them

Fox are Conservative Capitalists, not Liberal Communists.
They follow the almighty buck, forever.
They fear no TrumpHumpers.
Ta Ta Turdo, you worthless chunk of throw up.

GOD MOVES IN A MYSTERIOUS WAY, HIS WONDERS TO PERFORM, HE PLANTS HIS FOOTSTEPS IN THE DEEP AND RIDES UPON THE STORM.

God moved Biden into the White House.
How mysterious was that?.
.
Trump plants he male member dep in Storm’s Stink Hole.
The smell is to dye for.
The brown smell.

Liberals may be surprised how easily they get Covid after having 1st and 2nd shots, and now the Big Booster. Good Luck for being gullible. There are now many bumper stickers out there saying, “Say no to Joe and Ho.” I’m not kidding.

How many people with 1 shot of vaccine have died from Covid?
People with none?
Good Luck for being gullible.
.
“Say no to Joe and Ho.” is how crude some Trump supporters can be.
They lick his Stink Hole.

nothing but a pr stunt that failed….unless the idiots hosts of the view like to be laughed at