Home /Military, NEWS/House Republicans Condemn Passage Of Bill That Requires Women To Register For The Draft 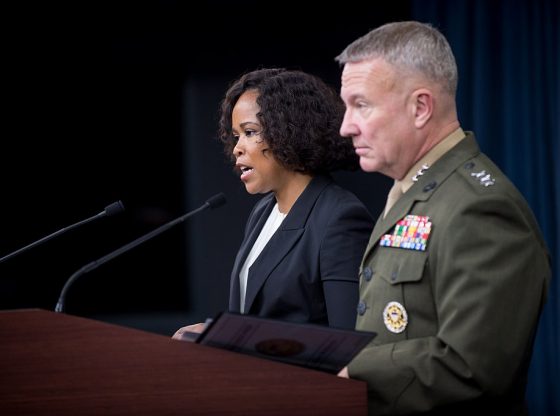 Conservative lawmakers of the House Freedom Caucus spoke out to denounce a defense bill that will require women to register for the military draft if it is ever reinstated.

Republicans in the House Freedom Caucus held a news conference on Wednesday to speak out against the “left-wing, woke agenda” for teenage girls to register for the Selective Service System.

Rep. Mary Miller (R-IL) accused the Swamp of trying to “sneak in” the provision and “hope no one notices.”

“This defense authorization, for the first time in our history, would require teenage girls to register for the draft,” she said. “No one knows about this because the Democrats have convinced the media that gender no longer exists so this isn’t a big deal.”

“But I want to make sure the American people know, the Democrats and, sadly, some Republicans want to draft your daughters,” Miller continued. “This is left-wing, woke agenda gone too far.”

Rep. Chip Roy (R-TX) had a stark warning for lawmakers: “If you vote for the NDAA, you are voting to draft our daughters. There is no other position you can take.”

“Under no circumstances should a civilized country, the United States of America, with the ability to have a volunteer force with the size and the caliber and the strength we have say that we’re going to force women into being drafted into the United States military,” he continued.

He argued that he didn’t trust the White House to not draft girls after the debacle that just unfolded in Afghanistan.

“The NDAA is supposed to be about defending the United States of America, not engaging in social engineering experiments, destroying the Department of Defense and saying that we have to draft my ten-year-old daughter,” he claimed.

“I cannot put into words the extent to which that idea angers me and undermines who we are as a nation and I cannot believe that House Republicans are sweeping it aside, sweeping it under the rug, refusing to talk about it while they blindly march forward saying the ‘conference’ supports passage of the NDAA.”

The following day, the $768 billion National Defense Authorization Act (NDAA) passed in the House with the votes of 181 Democrats and 135 Republicans.

Radical feminist women want this—women who recognize that by and large a military composed of men is the most effective.

Not all women! Some women still believe in traditional roles.

Amen, in a national emergency it would be all hands on deck for every able body.

I have to agree with the sly8ball, women want equality they should be required to pay for it, maybe then they will not so brazen to murder babies so they can have sex without responsibility, they called us baby killers in Vietnam so let us see how well the abortionist women fair when they have to actually kill one face to face. They have been enjoying the Freedoms that men have died for, maybe with them being drafted they might learn the cost of the Freedom they trample on daily not having had to pay the price

Demetrius
Reply to  JC B

Or, science could find a way to impregnate women-hating males so they can experience the joy of pregnancy. What’s that you say? you’re not a woman-hater? Ah but, you are as you equate women with birthing babies, nothing else.
As Nam-era vet, you do recall the WACs? The gov’t should’ve left them and the WAVs in place instead it is ignoring obvious physical differences between men and women AND in so doing, is reducing physical requirements for all military personnel in training, meaning, Uncle Sam is weakening our military.

JC B
Reply to  Demetrius

Your reply comment does not make sense, You imply myself to be a women hater, that is far from the case. I simple believe and trust that God’s decision to make men and women different is a great decision. With exception women CANNOT do what men do and men cannot do what women do. Have you been in combat, do your think you would trust your life to a female on the combat field of operations to carry you, drag you off the battlefield I would think the majority of females cannot verses the majority of men that can and did do that. Sure anyone can fire a rifle if t hat were the issue then fine, but if you were in combat, think about how many women could face hand to hand combat, how many can handle the terror, the atrocity of war directly in front of them. Yes men have a hard time with but that does not usually happen at the time of the event it does happen post the event but not during the time composure and action is required. Women do not belong on the battlefield I say that after 37 years of experience. Not to mention the disastrous sexual implications, the gender transformation of standards, if women are equal then they should have the identical standards to meet as are the standards of the men in the military. They do not why because they are not equal to a man

Sharon Metro
Reply to  JC B

Can I say it? AGREE with you! IF our young people took responsibility for themselves as well as others, we’d all be better off, and NO better way to learn that than in military service. My late husband, an ex-Army Ranger who served in Vietnam and I agreed with this policy, used to discuss the matter between us, and with five kids between us who could well have been affected by same….

Lois Harmon
Reply to  JC B

We are not other countries. This is just another example of the left trying to be woke. And the Republicans who voted in favor of this should be voted out! I would not send my 18 year old daughter off to war, that is crazy.

JC B
Reply to  Lois Harmon

Thanks for your comment, other Country women ARE NOT the women of America
they do not think or act like the women in the USA, I have a lot of respect for the e.g. Israeli military women, they are strong, able, and dependable wish American women had those qualities. Yes there are exceptions to this statement. There exist many positions in the Forces that women can be excellent at THEY JUST DO NOT BELONG ON THE COMBAT FIELD OF OPERATIONS< PERIOD> They should not be integrated with men, this just causes a undermining of the cohesiveness of a military structure for combat. I say this from 37 years in the military.

There are other nations that require women to be in the armed forces.Maybe we should adopt the same requirements as Israel…everyone of legal age has to serve for a certain period of time regardless of gender. The keyword as far as I am concerned is (everyone) no exemptions for politicians children!!!

Best close our borders so draft dodgers have no way to escape. Oh, wait, current powers that be have eliminated our borders. Bye-bye forced recruits. 👋🏾

EXACTLY! That country has been under direct and indirect siege since its inception, so little wonder they have such a policy. Think that strengthens one’s comittment to one’s country as well, a much-needed asset here in America!

Actually, though generally a conservative on mot matters, including social ones, think this ight be a good idea, with one caveat: option to do one’s “service” to one’s country i a volunteer position, not necessarily a military one, i.e. the Peace Corps (is that still active?) Israel makes military service mandatory for ALL of its citizens. I see nothing wrong with it, personally.

More insanity from the left. But, since men aren’t men these days, and feminists scream and holler for equality…here you go.