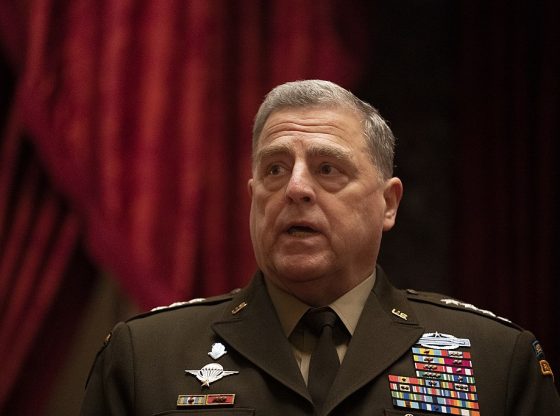 Army Gen. Mark A. Milley, chairman of the Joint Chiefs of Staff, speaks during an award ceremony for Capitol Police Officer Eugene Goodman as he is presented the Joint Meritorious Civilian Service Award in the Old Senate Chamber for his actions in protecting lawmakers and others during the Jan. 6, 2021 attack in the Capitol building, Washington D.C., Feb. 25, 2021. Goodman, a former Army infantryman who served in Iraq, is credited with warning and directing members inside the Capitol building to safety. (DOD Photo by Navy Petty Officer 1st Class Carlos M. Vazquez II)
| By: Sally Kent| Military,NEWS | 354 | 0 comments
Advertisement
Draft Donald Trump for President in 2024 [ACT NOW]

Milley said in testimony before the Senate Armed Services Committee the calls were generated by “concerning intelligence” that caused Americans officials to believe the Chinese were worried about an attack on them by the U.S.

“My job at that time was to de-escalate. My message again was consistent: calm, steady, and deescalate. We are not going to attack you.”