Home /NEWS, Politics/Nikki Hayley Says She Would Consult With Trump Before Launching 2024 Campaign 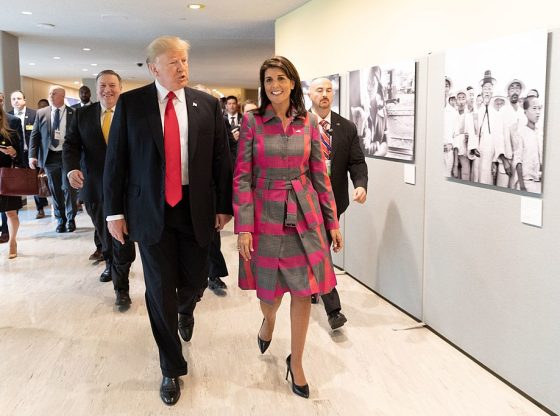 Former United Nations ambassador Nikki Hayley is hoping President Trump launches a third presidential campaign in 2024 and says that if she decides to run herself she will consult Trump first.

“He has a strong legacy from his administration,” Haley said . “He has the ability to get strong people elected, and he has the ability to move the ball — and I hope that he continues to do that. We need him in the Republican Party. I don’t want us to go back to the days before Trump.”

However, that sentiment seemed “slightly less absolute” on Tuesday.

The former South Carolina Governor’s messaging is a sharp turnaround after she seemed to torch her relationship with the former president following the Capitol riot.

I’m with you E.P. She was a very good U.N. Ambassador BUT somewhere along the line she just lost her way and I would not trust her ever again.

Ambassador Haley and others that fell into the MSM frenzied and edited January 6th combined rally, protest that was allowed to get out of hand are coming around. President Trump and his administration did not plot a riot. Congresspersons were constitutionally arguing on the floor, presenting evidence regarding voting irregularities. Trump supporters would not have wanted those voices silenced. However the Dems silenced them when they returned later in the evening. The MSM and Dems labeling this an “insurrection” sure came about quickly, as did the term “Big Lie”. Hopefully Americans will wake up, including those Republican’s who fell under the MSM spell.

one can only hope that Pres. Trump will run in 2024. But that won’t come soon enough with all the f*** ups Biden is doing. I feel sorry for anyone who gets hired for Pres. in 2024, what a mess it will be.

Why waste your time on Rinos? We’ve seen who they are and what their agenda is, No Thanks.

Ms.Hayley has done some good things, but like most RINOs, she can’t be trusted. I would not even consider her if Trump was on the ballot, and most of the likely alternates to Trump would be more apt to get my vote. She needs to reestablish her creds.

Like Pence… nope on her too.
A chameleon. Never know where she stands in the wind.

No, no, and hell no! She showed her true colors after 11/3, and should never be even mentioned by MAGA because of her betrayals.

Hey Dee, I agree with you.
She backs the old republican guard which will never ever win a Presidential election.
They are the same fools that are republicans trump haters.
Just look at those lost idiots voting with the abortion loving marxist demoncrats!

She would make a great VP with Trump as President. She is brilliant and is very well respected by world leaders, unlike Harris who is nothing more than a laughable in the eyes of the world.

hands down, Trump would get my vote….

No chance in hell for the bitch that stabbed President Trump in the back.