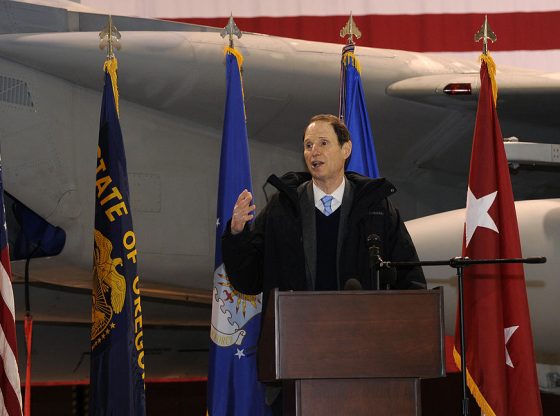 It seems Democrat Sen. Ron Wyden can expect a tense Thanksgiving meal this year after his own son put him on blast for “hating the American Dream.” Oregon Sen. Wyden and his “cronies,” meaning other Democrat legislators, were being criticized for trying to “mindlessly” rip things apart, a reference to Democrat’s unrealized capital gains tax.

Thankfully, I think I can compound faster than my dad and his cronies can confiscate it…$par$rick$apg$gfl$plby$cdon

“Why does he hate us / the American dream so much?!?!?!?!” the Florida-based hedge fund manager wrote. “Reality is: most legislators have never built anything… so I guess it’s easier to mindlessly and haphazardly try and tear stuff down.”

“Thankfully, I think I can compound faster than my dad and his cronies can confiscate it…” Wyden added.

Sen. Wyden’s son, a multimillionaire, slammed his father after the Democrat criticized Elon Musk on Twitter.

“Whether or not the world’s wealthiest man pays any taxes at all shouldn’t depend on the results of a Twitter poll,” the multimillionaire Senate Finance Committee chairman wrote. “It’s time for the Billionaires Income Tax.”

“Much is made lately of unrealized gains being a means of tax avoidance, so I propose selling 10% of my Tesla stock. Do you support this?” Musk asked his Twitter followers, who voted in favor of the move.

Musk noted that because he doesn’t give himself a salary or bonuses his money comes from stock. Musk then continued that “I[he] only have stock, thus the only way for me to pay taxes personally is to sell stock.”

There called dumbocrap commies for a reason, they want to destroy the american dream, and make it a,radical,liberal, socialist,marxist,utopia,with your money, how does that sound to u?

They’re also called DEMONICrats, and it’s EXACTLY what they are! Spewed out of satan’s mouth! But they should be happy, since they’ll join their ‘dad/boss’, very soon, and the furnace in the Lake of Fire, is just about ready for these idiotic, retarded, evil piles of fecal matter!! ENJOY YOURSELVES DEMOS!

What a great problem solver , we would be better off with a monkey as president, The big red wave is coming, hold the democrats accountable, tax and spend socialism is not the American way, flatulent putz biden, has our Country in recession, where is the report he is mentally fit to serve? The dalt does not produce enough personal gas to run our Country without inflation, shortages, although those standing down win of this public farter would argue that point. America is in serious in debt and it’s now getting worse, No border security, children in schools threaten with communism teachings, gasoline increases to $5.00 a gallon plus. Biden not only needs mental diaper changes, but physical diaper changes.Who is directly these mindless policies? Who is in charge of trying to run our Country into bankruptcy? Can’t wait till 2022 is here and investigations of abuse of power begin and these appointed non experienced heads are held responsible where they thing attacking Americans with self imposed mandates superceded established law to the point of being them being held treasonous. Remember how your household was affected, food shortages, transportation increases,don’t forget America look who is holding public office in your area, if they are democrats who voted for our Countries current problems,vote them out, let this be the new battle cry for voters, “notdefund the police” but “VOTE THEM OUT” look at each biden department heads radicals, no experience in their field of appointment, now that the problems are here they lack the ability to solve them, Biden must be investigated for his disregard of our laws. It’s not too late America, vote them out in 2022 take back the House,take back the Senate,get our Afghanistan stranded people back.

Myrffy
Reply to  charles A wilkins

I am in complete agreement. Why this country is allowing this idiot to remain in office all the while tearing down our country.

If/when Joes goes, we get the idiot Harris! That could be worse although it’s hard to tell!

DrBarbara
Reply to  charles A wilkins

I agree! And a monkey in the WH would be a lot more fun to watch than that old, tottering, demented criminal.

Remember, the saying if it ain’t working we need to hold all responsible and take back our government, they are only there to drive the people of this great nation, not to be dictators. It,”s time to get rid of this squad once and for all. The nation needs to stand up as one or at least the majority, you will always find fools who believe what they are being told. So, America are you willing to fight for your beliefs or just wallow in your life and let the squad rule it.?

Like I have said time and time again: Democrats are NOT INTELLIGENT PEOPLE but just small, emotionally destroyed children who keep searching for something to make them feel important and loved!
The average Democrat’s parents were poor examples of raising an innocent, naive child and turned them into an empty shell, afraid of anything and needing to “control” everything!
That is why democrats FAIL so often — no intelligence plus even less empathy for their very own actions, i.e. Afghanistan Military Removal and Opening our Borders!

Biddyboy has absolutely NO idea of what he is doing and someone behind the curtain is leading him astray! That leads me to the last defect Dems have: They listen to the wrong people who know how to make them “feel” important (because dem parents never gave that to them as children) then “use” them to do dirt!

Again, research our American government history and you will see what I explained here. Every democrat administration “destroys” (because they truly are NOT SMART) our Country in so many ways because they are NOT VISIONARIES, but drones. The Administration following a lame democrat one is ALWAYS REQUIRED TO FIX ALL THE DAMAGE LEFT BY THE CLUELESS AND IMMATURE DEMS — and that administration is always Conservative!

I do believe that the U.S. will definitely be tired of ALL THINGS DEMOCRAT BY 2024 and even 2022! The tide is going to change and Blue States will turn Red! Why? Because that is what happens in America and it is HOW our Country has survived for decades!!

Now if we could only find a faster way to get rid of the Weasel in the Hen House, Joe Biden AND his lackey administration of dunces! Don’t get me wrong. There are a few good democrats like Manchin of WVA and Sinema of AZ! They seem to CARE about our Nation and are fighting against the stupidity of their own political party! CUDOS TO THOSE TWO DEMS!

But the rest of the Dems in office — they have to go — including the V.P. Harris, the Black Barbie Doll in D.C. who would rather be shopping on N.Y. Fifth Avenue than doing her job! Thanks for nothing Harris! Don’t let your duties as V.P. interfere with your “girlie needs”! Get her out fast!

I hope all the idiots that voted for Biden (even though the bastard didn’t really win) is happy with what they’ve got now. Gas and food prices are out of site! I can’t believe he wants to pay illegals while social security is being raped, our veterans are being overlooked and medicare is going higher and higher. Not to mention wide-open borders. To hell with the illegals and to hell with Biden! He needs to go and NOW! Stupid Harris says there won’t be a Santa Claus these year….well if that is so, you stupid witch, it is the fault of democrats and that so-called dummy you call president! I have had enough of this administration. How about you?

Reality is: most legislators have never built anything… so I guess it’s easier to mindlessly and haphazardly try and tear stuff down.”

Why don’t we stop playing the game of each DIFFERENT Party and Group taking issue with the others views .The elected officials find it to be a WAY for them to remain in power . One against the other and both acting like they are the answer. We have so many more problems that our Nation had in 1865 which created a “Civil War ” !Could we in a peaceful manner agree to separate our Nation into groups that can agree and go forth with a government for its People .Kill babies ,open borders and all of these beliefs can live among people who agree but do NOT attempt to impute these beliefs on everyone

These JEALOUS DIMMs, who have NEVER had a real job or helped anybody, want to keep normal Americans from achieving THEIR dreams through hard work and ingenuity!

I remember when Democrats were calling for those ‘millionaires’ to pay their ‘fair share’ but now they are the millionaires so they upped the level to billionaire. Bravo to Wyden’s son for calling out the hypocrisy of his father and the Democrat party. Congress wrote the tax codes. It could change them to eliminate the ‘loopholes’ they decry but they won’t because their members depend on them in order to amass their personal wealth.