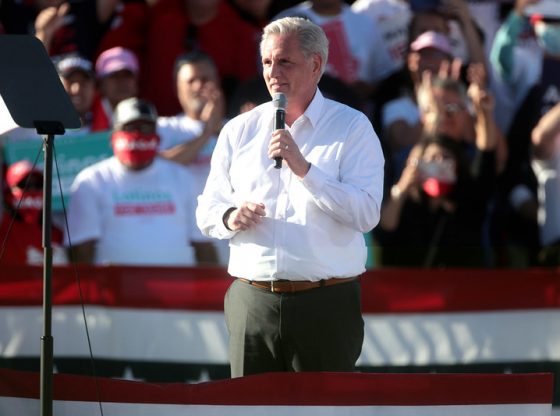 House Minority Leader Kevin McCarthy is promising justice for House Reps. Marjorie Taylor Greene and Paul Gosar after the two were removed from their committees. After House Democrats, and Reps. Cheney and Kinzinger voted on Wednesday to censure Rep. Gosar and remove him from committee assignments GOP Leader McCarthy made it clear that after 2022 a number of controversial Democrats could meet the same fate for their own remarks.

On Wednesday, the House voted to censure Arizona Rep. Gosar after he shared a cartoon on Twitter that showed him attacking progressive “Squad” member Alexandria Ocasio-Cortez and President Biden.

McCarthy also reiterated his threat that a future Republican House majority may remove Democrats from committees as retaliation for the votes this year taking punitive action against Gosar and Greene.

Democrats maintained in both cases that they were only establishing a precedent of taking action against House members who endorse political violence.

“Is the inference that I draw from your question that we should have not censured Mr. Gosar for his shameful behavior, for fear of something the Republicans might do in the unlikely case that they might win the Congress?” Speaker Nancy Pelosi (D-Calif.) said Thursday when a reporter asked about the prospect of Republicans removing Democrats from committees if they win the House majority.

“We would not walk away from our responsibilities for fear of something they may do in the future,” Pelosi said.