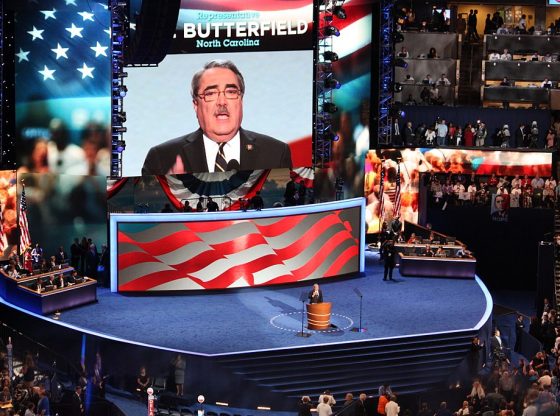 Another Democrat is bowing out of politics. On Thursday, North Carolina Democrat Rep. G.K. Butterfield announced he’s retiring ahead of next year’s 2022 midterms.

“It is time for me to retire and allow the torch to be passed to someone who shares the values of the district and can continue the work I have labored so hard for the past 18 years,” Butterfield announced in a video posted to his official YouTube channel.

“I am proud of my work in Congress on behalf of my constituents, and I know that my life’s work of fighting for greater fairness and equity will not cease, even after the close of the 117th Congress,” Butterfield added.

Butterfield was elected to the House of Representatives in a special election in 2004, representing North Carolina’s 1st Congressional District. He is the Senior Chief Deputy Whip of the House Democratic Caucus, appointed this year to replace the late Congressman John Lewis. He currently serves on the House Energy & Commerce and Administration Committees. He also served stints on the House Armed Services, Agriculture, and Ethics Committees. Notably, he served as the chairman of the Congressional Black Caucus from 2015 to 2017.

Before he made the announcement officially, there was significant speculation from local news outlets that Butterfield was considering retirement. Butterfield was used to winning his district by comfortable margins, but because of redistricting, his race has become a toss-up, since a smaller share of the black voters who propelled him to those margins will be included in the redrawn district. “While I am hopeful that the courts will ultimately overturn this partisan map and see that a fair map is enacted, I have made the difficult decision that I will not seek reelection to the United States House of Representatives,” Butterfield said in his retirement announcement.

Will Republicans manage to flip Butterfield’s district in next year’s elections? Tell us what you think in the comments below!

Biden, Pelosi and Shummer and their policy’s are driving democrates into mass retirements. Sure they will vote four this build back worst policy but at what cost to the Democratic Party.

What a laugh. This clown Butterfield is just another Democrat CAREER POLITICIAN that knows he is going to go down in the next election so, like the coward he is, he is bailing out.

I don’t know how Butterfield will know that he is retired. He will work the same amount as when he was in office. And his crowning dishonest comment was; ““I am proud of my work in Congress….” We would be proud too if you had done any.

They get to take their campaign funds with them at retirement. Could be millions. Slush fund

We don’t want them to retire! By going the retirement route these politicians get lifetime benefits that We The People end up paying for.

We want them to lose their re-election bid so that they lose any lifetime benefits that they would get by retiring.

They get benefits even if they lose! I don’t remember the number of years of “service” that are vested ,but not many!

YEA, BUTTERCUP is retiring, he was useless.

Another cowardl politician afraid of loosing an election like the boy child kinzinger.

ALL DemoRATS need to LEAVE so we can get this wonderful country BACK to where it was when Trump was in office. TRUMP 2024

Lying sack of wasted schit. He has done nothing but suck the eagle.

Another degenerate scumbag abandons the Titanic. Still, I hope the rest if his life is filled with excessive pain and suffering!!

The writing is on the wall.

Mass exodus of the socialist dems is due to their utter defeat next year. Sort of like cowards bowing out.

Usually they redraw districts to the Dem advantage; it’s about time something goes the other way! So sad to see ’em all go .. NOT!!!

a lot of democrats dropping out the election races….think they see the writing on the wall?

This is just what demo(n)©rats do❗️If they can’t “rig” elections, they’ll just bail, election-fraud is the only option, left for them, to either, stay/die in office, for the ‘free’ funeral❓

Great, Now take the AHPOS RINOS with you. Win-win for everyone.

Reminds me of the 30 something republican mass exodus several years ago when President Trump resided in the WHITE house. They cause the democRATS a sure win when they backed stabbed President Trump. No backbone POS!