This story is breaking.

Republican Congressman Devin Nunez will leave Congress at the end of the year to work for former President Trump’s media company.

The decision comes as California redistricting map drafts would have forced Nunes to either run in a district that flipped from favoring former President Donald Trump by five points to tilting in the direction of President Joe Biden by nine points, according to the Cook Political Report analysis, or run in a different district.

First elected to Congress in 2002, Nunes was a top congressional defender of Trump while he was in office.

President Donald J. Trump, Chairman of TMTG, commented, “Congressman Devin Nunes is a fighter and a leader. He will make an excellent CEO of TMTG. Devin understands that we must stop the liberal media and Big Tech from destroying the freedoms that make America great. America is ready for TRUTH Social and the end to censorship and political discrimination.”

Congressman Devin Nunes added, “The time has come to reopen the Internet and allow for the free flow of ideas and expression without censorship. The United States of America made the dream of the Internet a reality and it will be an American company that restores the dream. I’m humbled and honored President Trump has asked me to lead the mission and the world class team that will deliver on this promise.”

Since 2003, Mr. Nunes has served in the U.S. House of Representatives, currently serving California’s 22nd district. As Chairman of the House Intelligence Committee (2015-2019), Mr. Nunes worked on important matters related to U.S. security including cybersecurity and information technology. Mr. Nunes is also a Presidential Medal of Freedom recipient.

Devin Nunes will be an excellent addition to Trump’s TM&T Group! California will be losing an excellent congressman, but then, they don’t deserve him!

GREAT NEWS!!!!!!!!!!!!!!!!! JUST MAKE SURE THAT A REPUBLICAN/CONSERVATIVE TAKES HIS PLACE FROM CALIFORNIA. WE CERTAINLY CANNOT AFFORD SOME FOOL COMMUCRAT TO TAKE HIS PLACE!!!!!!!!

Sad that Nunez will be leaving, we need more like him.

CongratulationsNunez! We need good men like you in positions such as this. Prayers and good wishes are with you.

Poor guy!
After suing the cow, and losing, he’s got nothing left but to keep on being Donald’s water boy and personal Twitter Filter. 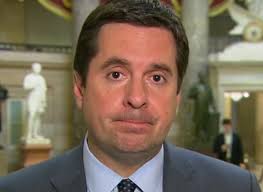 It’s so Democrat of you to pretend to look on the brighter side of things and then STOMP THE CRAP OUT OF THE BRIGHTER SIDE. But that action is exactly what the World thinks of democrats — losers, anti-realists, fantasyland dreamers and users and abusers of the Black race!

Actually the last category has been going on far too long and most Blacks are getting wise to the lies they get from the liberal Left. It’s about Dang time! I don’t know why they believed all the “Promises” thrown at them by those clueless dorks, because nothing has changed and those promises have evaporated into the hemisphere. AGAIN:
Democrats = Users & Abusers of Black Race! Time to wise up Black race!

Nunez will be a great asset to Trump’s Media Organization! His position in Congress (and mega others) will be filled with the RED WAVE that has been crashing down on dem’s heads lately! Everyone benefits from this new position for Nunez but the Dems. They must be going through box after box after box of Depends with all the lost dem seats in Congress — and it’s just the start of the democrat decline! More to lose next year and many more in 2024! THE FUN IS JUST BEGINNING Realitybasedboob! Ooops, I mean “bob”. My bad…

Devin Nunes is a true Patriot! Congratulations on your new position. We will miss you – but are truly happy for you and your family.

He will be hard to replace in commie kalifornia, overtaken by radical,liberal,socialist,marxist, commie dumbocrap death party. 9 million people have left and another many millions are also about to leave.

As long as those leaving California renounce their misguided, democrat idealism and embrace the conservative principles that make red states great, then we red state denizens, welcome you.

I spent 30 years in California, partly in the early 70’s and the rest from the mid 80’s, at a time when Republicans had a fair amount of representation.

I left in 2008 and will never return. Sad because it is a beautiful place, however the population is overrun with sleazebags, while conservatives are swept under the rug.

Blatant gerrymandering in California to turn Rep to Dem district? Of course the Biden Admin has no problem, but let Texas do it? And suddenly there’s a lawsuit – they are impairing minority ability to be fairly represented. Nunez can do much better with Trump directly! Smart move, Devin!

Good for you, Nunes. You couldn’t work for better than working for TRUMP. God Bless You

I hate to see Nunes leave his Congressional role in CA but I get it. Nunes is a good man, a fighter and a great protector of the Constitution and the American people but I fear that his fight in CA is lost. Nunes will do a fantastic job leading the TMTG as CEO and do a great job fighting Big Tech and the Leftist ideology of the Left to bring America back to greatness! As for CA. The residents have chosen the path they prefer and they will never recover from their bad choices and giving themselves to Socialism.

I don’t know if this is good or bad! NUNEZ has ALWAYS been a “TRUMPSTER! He’s BEEN THERE, telling Trump about “THE SNAKES” ? Leaving his seat? Does ?this” give Nancy more power? California is “such a mess, “I” don’t know about this. “SMART” or “DUMB” move? ” just “HOPE” it’s a “smart” move.