Home /Media, NEWS/Biden Says He Would Be Willing to Lose Presidency Over Chaotic Afghanistan Withdrawl 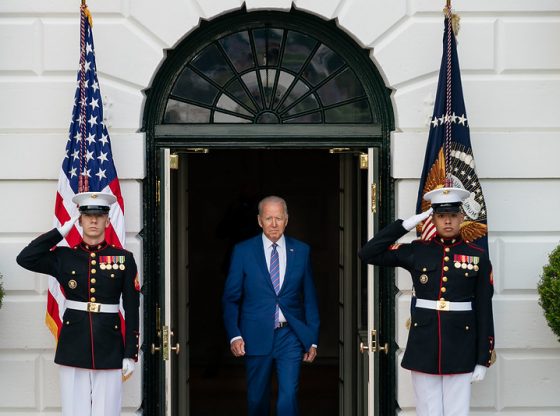 “Well, you know, I guess it should get to me more,” Biden answered, before resorting to his time-honored claim he was giving his “word as a Biden,” saying:

“My presidency, that’s right,” Biden trumpeted. “Because I’m gonna stick with it. There’s certain things that are just, like for example Afghanistan. Well, I’ve been against that war in Afghanistan from the very beginning. We were spending $300 million a week in Afghanistan, over 20 years. Now, everybody says, ‘You could have gotten out without anybody being hurt.’ No one’s come up with a way to ever indicate to me how that happens. … And so, there are certain things that are just so important.”

Advertisement
Draft Donald Trump for President in 2024 [ACT NOW]
What They Are Not Telling You: 10 Stories From the Border you Haven’t Heard
Report: Nancy Pelosi Will Run Again Despite Promising to Step Aside

Hew should resign immediately for leaving American citizens in Afganistan when he withdrew our troops.

Biden should hire Trump to sere as chief of staff with power of attorney, immediately, then sit back, shut up, and watch MAGA in action to save USA. That would be a great Christmas present for USA. Hey, I can dream!

That’s because the major Democrat flaw is that they never research their actions BEFORE doing something — they are NOT VISIONARIES. And when they fail — which is often — it’s always someone else’s fault!
Every last dem should be greatly ashamed of their actions in Afghanistan, including Biden! All should hang their heads in EMBARRASSMENT AND SHAME!

you mean “and when they fail”- almost always

Let’s go Brandon…
Everyone in Biden’s administration are godless heathens.

but then we would have a a biggeer idiot as president

No, we would have “ANOTHER” idiot as president, but we certainly wouldn’t have a “Bigger Idiot” because it is not possible to be a bigger idiot than Biden.

If biden’s willing to lose his presidency, then there are many millions of American citizens who are willing to see him lose it, more than willing actually, myself included. And not for just his cowardly, incompetent withdrawal from Afghanistan, but for that and every other idiotic decision he has made, and there have been many.
When does he resign?

Just FYI, Biden hasn’t made a single decision since having the election stolen from the best President in our history. He is being controlled by China, Russia, and Ukraine. He should be impeached, tried for treason, and hung in a public execution.

Bin biden is an empty shell be energized by his CCP handlers.
Unfortunately the next in line is ignorant pin cushion.
So uh, roll the dice and it’s snake eyes.

If criminal Joe leave the illegally obtained office then you have an illegitimate nit wit or a screaming witch with dementia also. Just wonderful.

Just another lie from the China owned boy, Groper Joe Bribedem, who can only repeat what he is told to say via teleprompter, “end of message”. When it comes down to it, he will fall back on his “blame Trump”mantra. ‘My word as a Biden” is as worthless as he and his minions are.

DidJoe really say I mean REALLY say “my Word as a Biden”?

Meaningless pontificating is one of dopey Joe’s favorite pastimes. He does have brown eyes!!

He is a complete moron.

Believe it hidenbiden, u dam sure will be a half term president, leaving Americans hostage, to be slaughtered with our allies, by terrorist taliban. U are a pathetic,disgraceful,embarrassment, to the American people and our allies.The world sees u the totally incompetent,egotistical,narcicist,unfit for the office.U are the laughing stock of the world, for the weak,spineless leader u pretend to be. Trump is still our president, u are the phony,empty vessel the deep state,installed from the stolen election,your days are numbered, before u are removed for corruption.

Well stated, and I approve of that message! Lets ego Brandon, IMMEDIATELY!!!!!!

He is demented. He’s proud of the debacle? At minimum, we gave up a defensible position in Bagram for one that was not and that’s ok?

The bastard never won the presidency, to begin with.

Biden already “Lost” his presidency — his brain is out to lunch pretty much 24/7!

Losers gotta do what losers do…everyone who ‘voted’ for him, knew what a basement-dwelling, “swamp-monster”, he is/was, his only qualifications for the job…apparently, he isn’t Bernie Sanders & doesn’t do mean tweets❓😵‍💫😂🤣

He’s a joke and needs to go now

Fortunately, he’s gonna’ lose the election for inexcusable mismanagement of the Afghanistan withdrawal that proved deadly. It was stupid and only the beginning of a string of dumb decisions. The border catastrophe might prove worse than losing a facedown to a disorganized mob of religious dinks on horseback. And then we have the Covid stuff that he bragged and blamed incidents as it suited his dilapidated reputation.

Overarching all these failures is the clear fact that he’s now mentally afflicted. In that mental state, his historic incompetence seems part of a plan by handlers who direct his activities. But poor old fool that he is, using logic, answering questions and even simply reading his crib notes and teleprompter are beyond his mental reach. Seems now he’s laying the groundwork to save his reputation when he loses both the election and those who helped him survive the presidency.

Biden is saying that to just hear his own voice. He already knows he can’t win reelection without even more vote fraud than that used to put him in office to begin with.

He is a murderer, he left our troops to fend for themselves knowing they would die and didn’t give a damn. He should be kicked slap out of our country and return his communist a– back to China where his buddies are. He is a useless piece of junk.

Is he willing to resign his office before he totally destroys the country?

His “word of honor as a Biden”. Well, well, well that hadn’t aged very well had it?

DONE! … see ya in November!

BS joe, but I pray you do lose, along with whoever takes over from you.

In first place he is not a legitimate president, the constitution was violated all over the country, vote by mail is not legal, there are thousands of evidence of a massive fraud in many states. Trump won but no politician has the guts to do the right thing. Biden is a fraud by himself.

Biden and the media are continuing to mislead whenever the subject is brought up. They insinuate that the botched withdrawal was necessary because we “had” to get out, and that Trump/Republicans were against exiting. That is a falsehood. They try to combine two separate decisions. First, the choice to withdraw… which Trump/Republicans agreed with and was planned by them. Second was the timing and execution of the withdrawal. It wasn’t even Biden’s influence that accomplished the first – that was under Trump. Biden was handed the Second… and he royally screwed that up. The media, and Biden himself in the above interview, try to justify the failure in the Second stage as if they were accomplishing the First stage. And Joe insisted on an extra 4 months to finish Stage 2. Only a brain-dead moron would remove troops before all civilians were taken care of properly.