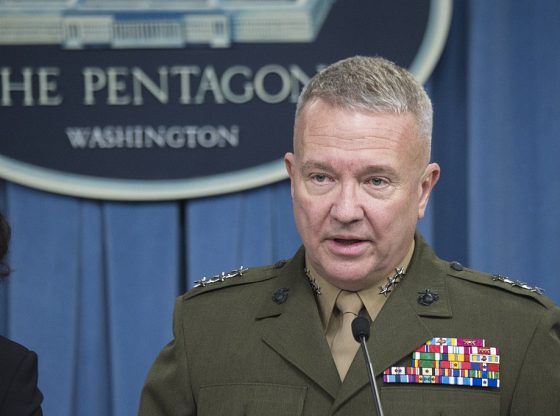 In a recent interview, Marine Gen. Frank McKenzie revealed the grim details behind President Biden’s Afghanistan withdrawal. In the wake of the withdrawal, Gen. McKenzie says that the U.S. has lost nearly all of its capability to track terrorism in the area.

“We’re probably at about 1 or 2% of the capabilities we once had to look into Afghanistan,” he said. The AP said that McKenzie warned that this meant that it was “very hard” to make sure that major terrorist groups like al-Qaeda and ISIS cannot use Afghanistan to launch attacks against the U.S.

McKenzie said that ISIS was “reinvigorated” after the Taliban released numerous ISIS terrorists from Afghan prisons that were abandoned under Biden’s leadership. The ISIS terrorist who murdered 13 U.S. service members during a suicide attack at the airport in Kabul was reportedly released from prison.

“Senior Indian intelligence sources familiar with the case have told Firstpost that he was handed over to the United States’ Central Intelligence Agency by the Research and Analysis Wing in September 2017,” Firstpost reported. “However, the jihadist walked free on 15 August along with thousands of other dangerous terrorists held in the high-security prison, taking advantage of the chaos that ensued in the aftermath of the United State’s hurried exit and the Taliban’s swift takeover of the entire country.”

“So certainly we should expect a resurgent ISIS. It would be very surprising if that weren’t the case,” McKenzie said, adding, “It remains to be seen that the Taliban are going to be able to take effective action against them.”

In a separate interview, President Biden reflected that he would be willing to lose his presidency over the disastrous withdrawal and noted he still believes he took the best course of action.

[Read Next: Biden Says He Would Be Willing to Lose Presidency Over Chaotic Afghanistan Withdrawl]

Our chaotic exit from Afghanistan resulted in us being the laughing stock of the world, thanks to Biden. It also cost us over $85 billion in military hardware that gave the Taliban a leg up!!

I heard about and I’ve made such great money.JHG It’s really user friendly and I’m just so happy that I found out about it. The potential with this is endless.
Here’s what I do…  GoogleJoin1.blogspot.com

Hidenbiden and all his woke generals, are a pathetic,disgrace, and all should be removed for total incompetency. They have no business leading our country after this disasterous, deadly debacle, and leaving thousands of American hostages, and allies to be slaughtered by terrorists.

“willing to lose his presidency” ? How do you lose something you never legitimately had ?

What this continues to expose is how stupid both Biden and the people who support him truly are. Ron White said it best; “You can’t fix stupid!”

So OBiden lied to us again. He stated that we would not lose our intelligence of the region after leaving Afghanistan. Government and intelligence are two words that should not be associated with each other especially when you are talking about the OBiden Administration. Here are some additional words that can not be associated with OBiden…Truth, Honor, Justice, Integrity, Transparent, America First, Helpful, Understanding, Caring, and the list endless.
Let’s Go Brandon!

Isn’t that what dems want? Attacks on US? It fits their agenda for demanding gun control every time a terrorist attacks. Like San Bernardino, two ISIS attacked an office and killed a bunch of people and CA screamed for gun control as if that would ever stop a terrorist attack. The stupidity and treachery of democrats is endless.

He doesn’t lie. He merely reads a teleprompter, does an about face and walks out.

When people aren’t vetted and storm the borders and just released and not to mention the Afghanistians who also were not properly vetted you know what is going to happen it is just of matter of when and where. Criminal charges should be implicated on what is happening to the protection of the American people but silence or a report like this is all you are getting