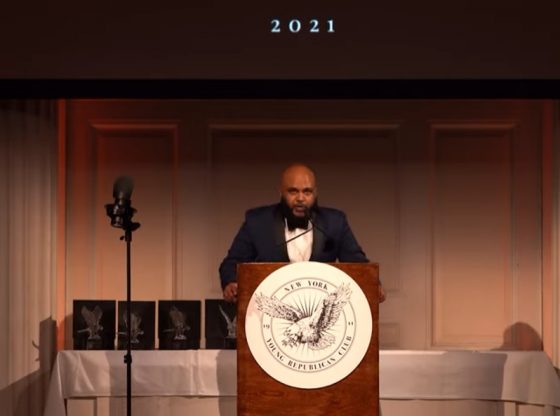 Nearly 500 members and guests of the New York Young Republican Club gathered earlier this month for the group’s 109th annual gala. Sitting in a beautiful venue that doubles as an event space and Christian Science church, America’s oldest and largest YR club convened under the leadership of its intrepid, tireless, and visionary president, Gavin Wax. I am proud to serve on NYYRC’s advisory board.

The evening’s featured speakers included former Mayor Rudolph W. Giuliani, Trump campaign spokesman Steve Cortes, Texas Republican Party Chairman and former congressman Allen West, and a needlessly evangelical Jenna Ellis, Esq. She was a top attorney in the post-election “Stop the Steal” effort. She squandered a priceless opportunity to educate a room full of fervent activists — many with broadcast, print, and social-media platforms — on 2020’s massive vote-fraud problem and how to prevent its repetition in 2022 and 2024. Instead, Ellis spoke endlessly and exclusively about Jesus without not even one mention of David, Moses, or “Judeo-Christian” in a room that was likely at least a quarter Jewish. On a Saturday night. During Hanukkah.

The soiree’s finest contribution, in contrast, came courtesy of a man who is not a household name. However, his performance made his listeners wonder how much longer this would remain true.

NYYR Vice President Vish Burra delivered barn-burning remarks as he introduced Allen West. Burra took that opportunity to deep fry the Democrat Party, and the Left in general, for “their parasitic paradigm.”

To mounting cheers and screams, Burra explained, “Before Lincoln, they wanted to enslave Black folk. Today, they wanna enslave everybody.” This mega-menace of the 19th Century continues its evil well into the 21st. Burra added that “they will institute Diversity, Equity, and Inclusion into their utopian global slave state. Everybody gets to be a battery for the regime.”

And so will you.

This exceptional speech is reproduced below, in its entirety.

And if you like this text, you will love watching this stemwinder via the miracle of YouTube.

Without further ado, I am pleased to bring you Mr. Vish Burra!

First and foremost, I would like to thank our sponsors, Dan Teutel, Executive Producer of Uncle Tom 2; Josh Eisen, a great benefactor to the Club; and Dave Lipsky, founder of VoterSafeHouse and the larger family of uncancellable apps, our freedom book. It is critical that magnanimous supporters like them help to put on these events for the American people, here and everywhere. So, let’s give them a big hand.

Also, let’s give a warm welcome to one of my mentors and dear, dear friend, Raheem Kassam. He told me earlier, he felt like this is his first Cotillion, and now I kinda feel bad for him. So, let’s give him a hand, too.

It’s been a wild and eventful year since the 108th “Forbidden Gala,” which, to my knowledge, is still under ongoing investigations by New Jersey Governor Phil Murphy.

Now, unfortunately, the apple of his eye, the one he describes as “the handsome” Congressman Matt Gaetz, couldn’t make it tonight, but plenty of his staff are here. Joel, Isabela, John, thanks for coming.

Thomas Dewey, former president of the NYYRC, former governor of New York, former Presidential candidate. A great icon of political history in the Empire State. There was no doubt about his wherewithal to fight. He took on organized criminals with vigor, earning him the nickname “The Gangbuster.”

And, as a Republican, he exemplified the great history of the party: to free the slaves, and less than 100 years later, he helped enact first in the nation anti-discrimination laws in the workplace, recognizing the dignity of all working-class people of all creeds and colors.

People forget that the Republican Party was founded on abolishing slavery. You hear these clowns on TV say, “The parties switched. There was a switch!” Nonsense. Lies. Propaganda.

The President who freed the slaves, Lincoln, gave a speech to this very club in 1856. I am here to tell you, over 100 years later, those Democrats, the Democratic Party, and by larger extension, the political and global Left, have never changed. What they were then, is what they are now.

Before Lincoln, they wanted to enslave Black folk. Today, they want to enslave everybody. In fact, they are apoplectic that they had to work for over a hundred years to get back to this point. Back for the first time, that they will institute Diversity, Equity, and Inclusion into their utopian global slave state. Everybody gets to be a battery for the regime.

From time immemorial, to the eons that come after us, they will always have the coldest perception of humanity. That humans are mere instruments, that their family, their nation, their god, are of no consequence in their pursuit of that global slave state. That all problems can be solved with material solutions. That there is always a way to squeeze the people to continue their parasitic paradigm.

In World War II, Americans got to see what that utopia actually looked like, as we are honored to show you an exclusive trailer for the attendees of this gala, of Uncle Tom 2. Below is from the original Uncle Tom.

They will not stop until everything looks like this, and until the people have the scales taken off their eyes. Only then, can they see clearly.

They want to spread the wealth for everybody. That’s their intent. What they end up doing, is turning everything into a ghetto. I don’t need to prove to you that that’s true. In cities run by Democrats, you can see it for yourself.

That is the future they want for you:

The longhouse of the savages.

An existence mired in the filth of the primordial man.

A dystopia run by the Godless, mocking the Lord’s Plague by making us feast on the locusts, in response to the famine that they create.

I am here tonight to stand with all of you and say:

We will not live in the pods.

We will not eat the bugs.

We will not drink the soy.

And to show them that we mean business, perhaps the Yanks need to get their groove back and lead the Union to defeat the globalist vocation of enslaving nations.

And if you are ever in doubt on how to win, how to defeat this encroaching tyranny, through the everyday hustle of facing off against the high-tech struggle sessions of the online mobs that will inevitably lead to high-tech lynchings as Clarence Thomas so eloquently described them in his face-off against President Joe Biden, I leave you with a quote that General William Tecumseh Sherman wrote in a letter to James Guthrie, who would later go on to be senator:

“War is the remedy our enemies have chosen. Other simple remedies were within their choice. You know it and they know it, but they wanted war, and I say let us give them all they want; not a word of argument, not a sign of let up, no cave-in till we are whipped or they are.”

As Sherman marched to Savannah, he smashed everything to the sea. To win.

He had the railways destroyed, using a method named the Sherman Necktie. I promise they were tied tighter than Steve Cortes’s bowtie tonight.

Stick a feather in that.

Today, we need a real gangbuster like Governor Dewey in the fight today.

A man who had no problem calling out the Communist Party members among him during his time served as a congressman from Florida.

He is quoted as saying during an infamous military court procedure:

“If it’s about the lives of my soldiers at stake, I’d go through hell with a gasoline can.”

We need men like this ready to fight against the Democrats, against their campaigns to enslave us all again.

And with that, I am proud to introduce the recipient of the Thomas R. Dewey Award, former congressman, former Texas GOP Chair, and future Governor of Texas, my fellow co-star in Uncle Tom, the violently based, Allen West.

I heard about and I’ve made such great money. It’s really user friendly and I’m just so happy that I found out about it. The potential with this is endless.
Here’s what I do…