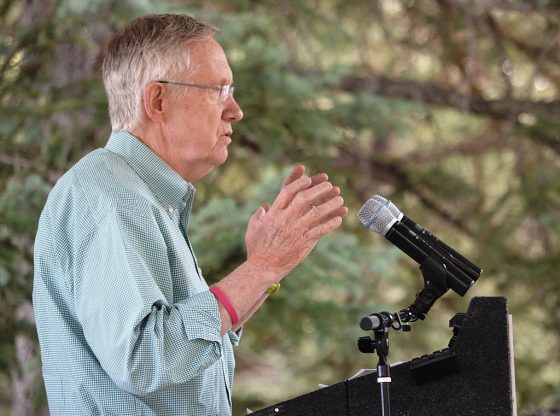 Nevada’s Sen. Harry Reid discusses the history of inter-agency partnership to preserve Lake Tahoe at the 18th Annual Lake Tahoe Summit outside of South Lake Tahoe, California, Aug. 19, 2014. Federal, state, and local leaders were on hand to reinforce their commitment to ecological restoration and improving water quality in and around the lake. The Corps continues to partner with state and local agencies on a series of ecosystem restoration projects around the lake. Photo cropped for emphasis. (U.S. Army photo by Luke Burns/Released)
| By: TTN Staff| Government,NEWS,Politics | 10446 | 27 comments
Advertisement
EARN YOUR BADGE Help Elect Chief James Craig for Governor [ACT FAST]

Senator Reid was responsible for blocking then-President George W. Bush’s attempt to privatize social security and was instrumental in passing Obama-care as well.

Famously, Reid led the push to change the Senate’s procedures for confirming judges and executive-branch nominees with a simple majority. The move altered the chamber and led Mitch McConnell to use it against Democrats in confirming former President Trump’s nominees.

Reid wasn’t without fire. He attacked presidential candidate Mitt Romney with unfounded claims of Romney not paying income taxes for a decade.

Senator Reid urged Barack Obama to run for president and predicted he would become the first black president stating, ““light-skinned and had no Negro dialect, unless he wanted to have one,” to which he later apologized.

Harry Reid is survived by his wife, Landra, and five children, and numerous grandchildren.

Not sorry for my lack of sympathy. Nevada is better for it.

Another crooked Dem has gone to hell.
Wonderful.

The world is a better place, for it .

What made him to have hung around for so long?

god can’t bless his globalists and all their puppets forever, eventually nature and the world wins .

God isn’t the one who blessed the globalists and their puppets….that was Satan who Reid and the other globalists sold their souls to! God hates sin, He does’t bless sin or sinenrs!!!

I might also add…Reid suffered for 4 years with pancreatic cancer… wouldn’t call that a blessing, I am sure he went thru hell, however there is another hell waiting for him!

RIP, but it will always be McCarren International Airport to me.

I do not delight in the death of Harry Reid, but he was a political hack, and I, for one, will not miss him.

Hey, Harry, just how hot is it in hell?

globalists and their puppets go to heaven like altar boy raping demonrat priests .

Wrong! You know nothing about how to get into heaven!

I wish I could say something nice about “Dirty Harry” Reid but alas, I cannot tell a lie! He was one of the most dishonorable and dishonest Speakers in the history of America!
I do offer condolences to his poor family……………….

No mention of Reid’s Las Vegas organized crime link’s?
nor his Mentor-ship of all things evil even Nancy Pelosi.

Kevin
Reply to  D A MacKAY

Or his Chinese business partners, with whom he wanted to set up a taxpayer-funded solar energy farm – on the Bundy Ranch…

This explains why today seemed more pleasant that it should have been. Another leftist fanatic has joined his heroes Lenin, Stalin, and Mao in Hell.
I know that seems harsh, but considering what Reid wanted to do to America, it’s more than he deserves in recognition.

It;s about time. He was a very Corrupt scoundral. Good Riddence!!

He made his mark on the world. Not many can say that. good or bad. RIP Grampa

Reid sold his soul to Satan for money…how can anyone be proud of the marks he made on the world when they were all for his enrichment and greed for his party….that isn’t good, its bad and has no honor!

This morning supposed “conservative” anchors are saying great things about this man. He wasn’t the “lion” of the Senate; he was the JACKAL with his shady real estate deals and lying. Especially heinous was stabbing a fellow Mormon in the back and then bragging about it. NOTHING to praise here!

The Harry Reid legacy will be lies, deceit, and self-enrichment. Now Las Vegas just needs to remove that noxious name of his from their airport.

This is good news. The only thing better would have been if Nancy Pelosi or Joe Biden reached their “End of Days”!

that dude is right up there with mccain…NO HERO