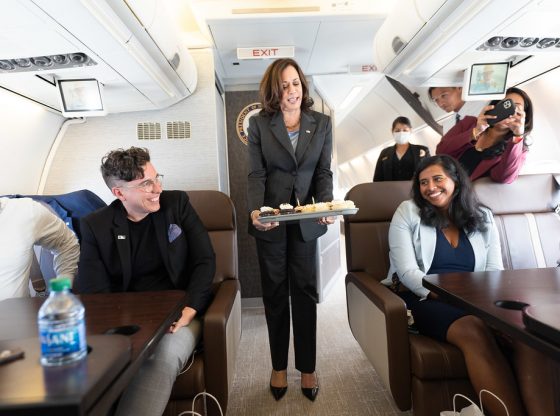 Vice President Kamala Harris sat down on Sunday for a refreshingly giggle-free interview on CBS’ Face the Nation. Anchor Margaret Brennan asked the Veep: “As you come to the end of this first year, what do you think your biggest failure has been at this point?”

Harris replied: “To not get out of D.C. more.” She elaborated: “My biggest concern is I don’t ever want to be in a bubble when it comes to being aware of and in touch with what people need at any given moment.”

This reply raises an immediate question:

Barring that, has the Secret Service lost the directions to Joint Base Andrews, the home of Air Force One, Air Force Two, and other VIP aircraft?

Harris can hop on her own fully equipped jumbo jet any time she likes. It does not operate on a timetable. AF2 comes and goes when she is good and ready. And not a moment sooner. So, if Harris has been trapped in D.C., that is her fault.

If she needs somewhere to go, why doesn’t she mount that 757 and fly to the scene of her most stunning failure, the utter catastrophe at America’s southern “border.”

Harris began this vital responsibility by studiously staying as far from the border as possible for three months after President Joe Biden named her Border Czarina on March 24. When NBC News anchor Lester Holt reminded her that she had not been to the southern frontier, Harris bafflingly snapped, “I haven’t been to Europe, either.” That answer neither built confidence nor reassured America’s continental friends and allies.

Harris finally made one cursory visit to El Paso on June 25. That city is an 11-hour drive from La Joya, McAllen, and other Texas locales where 170,000-plus illegal aliens are invading this country every month. Harris has yet to return anywhere near the “border,” which is the No. 1 item in her portfolio. She and Biden have earned twin F-minuses on this vital issue.

So, Harris’s assignment is to get the border under control. Instead, illegal-alien apprehensions have tripled.

Alternatively, Harris may have succeeded beyond her and Biden’s wildest dreams, if one agrees with me that the meltdown of America’s “border” is no accident. The only logical explanation for a three-fold increase in illegal aliens breaking into the United States is that this is what Biden, Harris, and the Left want.

This human tsunami is crashing in from some 150 different nations — from Mexico to Haiti to Venezuela to Yemen. These people are greeted with open arms, rarely tested for COVID-19, and then given free bus tickets and airplane rides into the U.S. interior. The Left sees these as Future Democrats of America and assumes that they will start voting, legally in years or illegally in months. And, they reckon, most will vote Democrat. So, wave them through with all deliberate speed!

By that measure, Harris has done her job superbly.

So long as Harris avoids Air Force Two, she can address another major failure.

Before she became Veep, Harris was a U.S. senator from California. As such, she should be on Capitol Hill, negotiating with former colleagues to get Biden’s agenda through Congress. But she seems either to have flopped in that role, or is not even trying.

Vice President Mike Pence worked with Congressional Republicans to enact President Trump’s agenda. Indeed, at this point in his presidency, Trump had signed his keystone tax-cut measure into law. To his credit, then-Vice President Biden pushed Obama’s priorities among his former colleagues not least ObamaCare, which (menacingly) also became law.

Meanwhile, Harris has been invisible as Biden’s signature $4.8 trillion Build Back Better Act has floundered and, one hopes, died.

Add Harris’s lackadaisical performance on Capitol Hill to her list of failures.

Finally, Harris has said that she is being picked on because she is both black and a woman.

What a racist, sexist country!

Harris, to be clear, was born in the USA of Jamaican and East Indian parents. Even with her unusual and highly colorful background, Harris received enough ballots to become Veep, not even 14 months ago.

Has America suddenly become a racist, sexist nation that gives her only a 28 percent job-approval rating?

Kamala Harris’ pigmentation and X chromosomes posed no barrier to her election. Indeed, they might have helped. She faces such heavy criticism because of her disengaged work style, the toxic environment in her office, her inability to master the issues in her bailiwick, and her singular talent for sticking her foot in her mouth and then – until recently – laughing about it like a nervous little girl.

Joe Biden and Kamala Harris have been in office for 11 months. They have 37 months to try to get something right.

Perhaps she could “find her keys” , if she got down on her knees?

We all need to thank Willie Brown for putting his Ho into power. She is so totally incompetent – as bad as, if not worse, than our Incompetent-in-Chief.
Last week Bite Me agreed with “Let’s Go Brandon”. Perhaps it should be changed to “Let’s Go Brandon and Cameltoe”.

Got a point there, at lease Biden has a legitimate reason, being senile.

Harris can blame being black or being a woman but we all know she is completely unqualified for the job. When has a liberal ever taken responsibility for anything. 80 million people didn’t vote for a demented old man and this nasty old w hore.

I have a suggestion where she should go, but might get kicked off if I put it into words here!! So just let me quote again, my buddy, Bugs Bunny, “What a maroon!”

Biden chose her because of her color and sex, obviously not her competence.

Sorry, Biden DID NOT choose her.

I think the photo presents her performing a job she might almost be competent at.

Like AOC….I tend to get them mixed up a little.

I have never seen two more pathetic,disgraceful,incompetent,imbarrassments, of powerful,people in my life.One year in office and 0 accomplishments, but 6 major crisis’, our enconomy in ruins,inflation at 10%, hidenbiden’s mandates putting thousands of worker’s out of their livelyhoods.Gas$7.50 a gallon,Americans dying from fentanal because of open borders,country invaded by illegal criminals and terrorists.Hidenbidens lawless America looks like the wildwest, murders,shootouts,our kids being slaughtered, on the streets and school.Americans and allies being hunted by the taliban, because they were left hostages,with no way out. Neither one of these two are fit for office, they have no clue of what to do, to help the American people, because they are the enemy of the American people. Both need to be removed for total incompetence, and pretending to be something their not.

“Harris sat down on Sunday for a refreshingly giggle-free interview” Really? Seems odd since everybody else noticed she giggled loudly, and right on cue, when she answered what her biggest failure was: “To not get out of D.C. more.”

We have to tolerate Biden and Kamala for 37 more months, We should be down on our knees praying for Jesus to come back.

Soon, by all the signs. Get ready. One of the last signs will be the official (though NOT full, disclosure of UFOs and aliens.

We should be down on our knees praying for jesus to stop blessing his globalists and all their pupets; $oros and chester biden and demonrats and rinos and fbi CRIMINAL organization and media and libby snow flake sheep and altar boy raping demonrat priests .

AHA Cackling right there at the beginning of the interview! It’s So Obvious that she is playing the “VICTIM” for all its worth, using the excuse that the reasons she isn’t able to overcome her Failures are because she is a Woman and to boot one of color! Actually the Two Reasons she was appointed as VP! Go Figure!

She’s a loser. We need to let her go back to California.

Her in particular being one.

Please don’t send her back to California. We have enough problems having to deal with our idiot governor as it is.

The ONLY reason that she was “PLACED” in the VP position is that she is a “black” woman who would do as she is told by THE NWO handlers. And, of course, it was not Joe who made that choice.

I am so glad someone finally called her on that ridiculous comment “oh, I couldn’t get out of DC, because of Covid…” what a joke that is, what a joke she is!!

True, but no one is laughing!

It is kind of hard to laugh at bad jokes.

They wouldn’t know what is “right” if it were to hit both in their faces. Their past performance suggests a very unsettling future for America. Let’s pray that this great country can manage to hold up until these two are out of office.

I remember when we would make fun of the French as “cheese eating surrender monkeys “
Courtesy of Monty Python.
Now to our dismay it is the US under the Democrats control.
Never thought I would live to see the collapse of the American empire.

clearly your 2021 trips on our Govt aircraft have resulted in zero positive results for the American people.
so do everybody a favor and stay in DC.

Giggles is practicing for her future waitressing job at Denny’s.